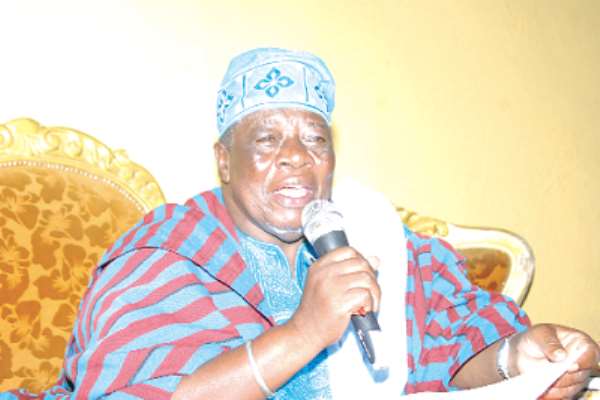 The National House of Chiefs has added its voice to the call for peace after the nine justices of the Supreme Court deliver its verdict on the 2012 Election petition.

'All the political parties involved in the current Supreme Court case and their supporters must accept whatever verdict that will be announced by the court on September 29,' the President of the House of Chief, Professor John S. Nabila said.

According to the house, Ghana's position as the beacon of true and genuine democracy before the International Community should be maintained and seriously guarded at all cost.

Prof. Nabila who made the call urged all Ghanaians to first accept the verdict whichever way it went.

Speaking at the 2nd general meeting of the house in Kumasi, Prof. Nabila also appealed to both the print and electronic media to make every effort to help the nation to move on in peace and development.

He said to ensure peace before, during and after the declaration of the results by the Supreme Court, the house recently met with the Inspector General of Police (IGP) to discuss how they could help ensure peace after the announcement of the verdict.

The President assured the IGP of their desire and preparedness to partner with the Security Agencies to maintain the peace we are currently enjoying in the country.

He, therefore, appealed to the government to release funds for the completion of their new office complex currently under construction at Asenua, near Kumasi since the old building had a problem of leakage. There were no Funds for the rehabilitation of the old building and the various regional houses of chiefs which were also facing similar problems was lacking.

Since the retirement of the Legal counsel for the house in March this year, Judicial Committees had not been able to meet and deliberate on issues affecting their activities, adding that most regional houses of chiefs were also facing the same problem.

Prof. Nabila said since the absence of a Counsel for the house was affecting their activities, they had sent applications to the Minister of Justice and the Attorney General through the Ministry of Chieftaincy and Traditional Affairs to assign some staff to their office to assist the Judicial Committee to sit on cases.

The President congratulated all students who excelled in the West African Senior Secondary Certificate Examination (WASSCE) and commended the government for the assurance that funds would be made available to expand infrastructure to accommodate more students.

The Minister of Chieftaincy and Traditional Affairs, Dr Henry Seidu Danaa, said due to the good image of the chieftaincy institution in the country, a delegation from Zambia will be in the country next week to interact with  Ghana's House of Chiefs to understudy their good practices.

Dr Danaa, therefore, urged all to work hard to ensure that the good image of the Chieftaincy institution was maintained.

He assured the house that a new allowance had been approved by parliament for members and said it would soon be paid, with arrears dating back to January this year.