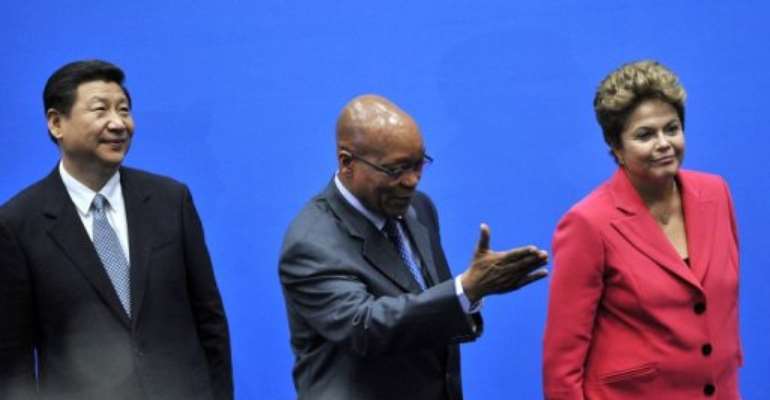 JOHANNESBURG (AFP) - Business leaders from the BRICS group of emerging economies met Tuesday to discuss trade with Africa, insisting that the bloc's planned development bank has not been abandoned.

"Our governments are still committed to the idea of the bank, we believe that it will happen," said Ma Zehua, the leader of China business delegation.

He said the bank would play an important role in "supporting trade and investment between member states."

After their March summit in South Africa, leaders of BRICS nations Brazil, Russian, India and South Africa failed to launch the much-anticipated bank.

The proposed bank is meant to rival Western-dominated institutions like the World Bank.

"Africa has some of the fastest growing economies in the world, and infrastructure plays an integral role in supporting growth," said Zuma.

Other critical areas of investment were in mining, healthcare, agriculture and energy.

In 2012, total trade within the BRICS grouping amounted to $6.1 billion, representing 16.8 percent of global trade, according to Zuma.

Zuma said is was becoming well known that "the rate of return on foreign investment in Africa is higher than in any other region in the world."

However, the leaders of the council which was set up during the last BRICS leaders summit in Durban lamented trade barriers that still exist within the continent, like visa regulations and uncompetitive practices.

"A lot still needs to be done in order to ease these conditions and make Africa an attractive investment destination," said Ma.

South Africa, which is the smallest member of BRICS, was admitted into the grouping in 2011.