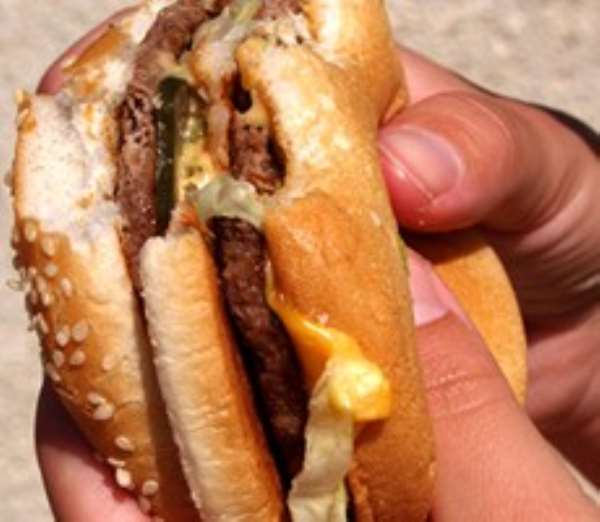 A woman had to have her jaw reset after dislocating it while eating a triple-decker burger.

Nicola Peate, from Ormskirk, Lancashire, injured herself while eating at Liverpool's Almost Famous restaurant on 8 August.

Ms Peate, 25, who has a syndrome which makes her joints unstable, was treated at the Royal Liverpool University Hospital the next day.

She said she would be "more conscious of the size of food in future".

"I hope that in future, she takes more care when eating over-sized burgers," she said.

She added that "if food is too large, we would recommend cutting it into more manageable chunks".

'Massive cringe'
Ms Peate said she had been in pain after trying to eat the burger but did not realise the extent of the injury until the next morning.

She said: "I didn't think I'd dislocated it - you don't expect it to happen eating a burger, but I tried to eat it with a knife and fork and couldn't.

"I couldn't open my mouth fully - it felt like I had cramp in my tongue, then I started to get an earache and a headache.

"The next morning, I felt really, really ill. The whole side of my head was hurting, then it started to feel like it was in my jaw and I knew I'd dislocated it."

The 25-year-old has Ehlers-Danlos syndrome, which means she has hyper-flexible joints that are prone to dislocation, so she said she knew to go to hospital for treatment.

She added: "The minute it went back in, it was like turning a tap off in my head - all the tension just went."

A spokeswoman for the restaurant said they would be happy to have her back to "enjoy a burger on us [though] we'd recommend something a bit more manageable".

"We all had a massive cringe at the thought of someone's jaw being popped back into place, but we're all really glad Nicola is okay," she said.

Inside Politics: Political Quotes
Catch up with all the political quotes from our politicians.
Sponsored
More Weird News
Modern Ghana Links
Chinese Restaurant Operator Uses Opium To Get More Customers
Man gets tens of thousands of birthday calls after sons post his phone number on billboards
Mysterious Condition Makes Woman's Breasts To Grow Heavily
Tamasco Students Performed Final Funeral Rites, Burial Service Of Core Maths
Unbelievable: At The Airport Passengers Should Be Weighed Before Flying
The Day I Will Never Forget Is The Day I Had An Accident
Filipino Man Has Been Nailed To A Cross Every Good Friday For 33 Years
Check Out Japan's Famous Aquarium Toilet
Woman Goes To Bed With Flat Stomach, Wakes Up With Baby Bump
Election Reports Quotes Dossiers
TOP STORIES