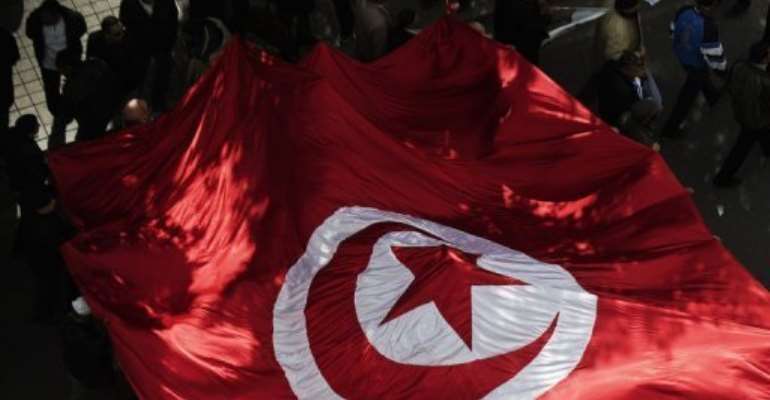 TUNIS (AFP) - Tunisia on Monday pushed ahead with talks to resolve a political crisis sparked by the assassination of an opposition politician, but with no sign of an end to the deadlock.

Rached Ghannouchi, the leader of the ruling Islamist Ennahda party, and the powerful UGTT trade union's chief Houcine Abassi held talks to seek a way out of the weeks-old crisis.

But the meeting failed to make any substantive progress, while a coalition of opposition parties renewed calls for the government's resignation.

"We are not very optimistic... There are no clear concessions from Ennahda," Abassi told private radio station Mosaique FM.

The leader of the trade union, which is playing a mediating role, was due to present the Islamists' proposals to the opposition on Tuesday.

Ghannouchi, meanwhile, insisted there had been progress and that he had made certain proposals, which he did not elaborate on.

They were due to meet again on Wednesday.

With neither side showing any sign of softening its stance, the political impasse remains, nearly one month after the assassination of the opposition politician Mohamed Brahmi, an attack blamed on Muslim extremists.

Ennahda revealed on Sunday that Ghannouchi had last week met ex-premier Beji Caid Essebsi, who heads the opposition party Nidaa Tounes and is a sworn a sworn enemy of the moderate Islamist party, while on a European tour.

But few details of their meeting emerged, and Ennahda's decision-making body on Sunday said it endorsed the position of Ghannouchi, who has proposed a broad-based national unity government while rejecting opposition calls for the formation of a technocrat administration.

"We remain committed to our approach... We are for a national unity government headed by Ennahda," said the president of the party's Shura Council, Fethi Ayadi.

He said his party supported the idea of "national dialogue," under the auspices of the presidency, which backs Ennahda, and the UGTT, which is demanding a non-partisan government.

Separately, the National Salvation Front, a loose coalition of opposition parties that have mobilised anti-government protests since the 25 July assassination of Brahmi, reaffirmed its position.

"The NSF declares its commitment to demanding the dissolution of the government and the National Constituent Assembly, and the formation of a government... composed of independents," Mobimo Ellouze said after the group met on Monday.

The NSF also called on all social and political actors to take part in nationwide protests to be held August 24-31 demanding the government's downfall, according to opposition MP Samir Taieb.

Opposition activists accuse Ennahda of eroding women's rights and of failing to rein in hardline Islamists, thought to be behind the murder of both Brahmi and leftist politician Chokri Belaid some six months earlier.

Ennahda supporters are determined that after long years of repression under president Zine El Abidine Ben Ali, who was ousted in Tunisia's 2011 revolution, their party retains the right to rule.

It emerged from parliamentary polls in October 2011 as the largest group in the national assembly, although Belaid's February assassination brought down the first Ennahda-led government.

Ettakatol, one of Ennahda's secular allies, says it supports a "non-partisan government," but has yet to pull out of the ruling coalition.

The party's leader Mustapha Ben Jaafar, who is also parliamentary speaker, announced a suspension of the assembly's activities on August 6 until political dialogue begins.

Last week, Ennahda activists and their opponents held rival rallies, highlighting the deep divisions over the balance to be struck between secularism and democracy following the revolution.

Don’t give me reason to close down schools again – Akufo-Add...
21 minutes ago