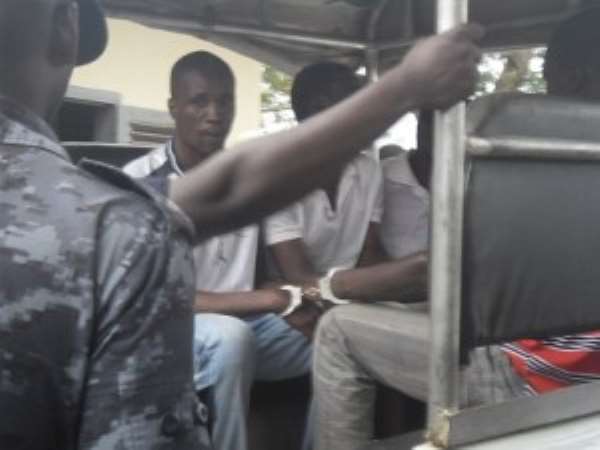 The Kade District Magistrate Court was an entertaining scene last Friday, as two gold murder suspects, standing trial, engaged each other in a verbal confrontation over their alleged involvement in the death of a forty-two year old taxi driver, James Yaw Acheampong.

It took the intervention of the court, presided over by His Lordship Gid Idiasu, to restrain the two, Kwabena Effah, a trader, and Foster Emma Gyimah, a barber.

The two suspects were among a gang of four believed to have murdered James Yaw Acheampong in the wee hours of April 4, 2013, at Pentemtwam, a village near Kade in the Eastern Region.

It all happened after the Prosecuting Officer, Chief Inspector Essel, had read out the facts of the case to the court, and accused Foster Emma Gyimah of masterminding the robbery of Kwabena Effah of his gold, resulting in the death of the taxi driver.

But, rebutting the facts, Foster Gyimah told the court that he, together with his family, had been at loggerheads with Kwabena Effah and his mother over a disputed land, and there was no way the two could come together and trade in gold.

'My Lord, Effah and I have long been at loggerheads. So, where on earth will he get gold and take it to his enemy to help him sell it? My Lord, please carefully look into this matter again,' Foster Gyimah pleaded with the court, with tears running down his cheeks.

He added: 'If Effah was telling the truth, why is that he didn't report himself to the police when the incident happened, but rather took to his heels?'

Kwabena Effah, in a swift response, told the court that the police had their facts right, because Gyimah had long been his friend who 'even brings customers to buy Indian hemp from me.

'My Lord, during our stay at Nsawam Prisons, Foster came to me and pleaded that when we come to court today, I should testify that he was not part of the case, so that when he is freed, he would go and look for money to bail us. What he is saying are all lies,' he noted.

Kwabena Effah, who is physically challenged, and his friend, Foster Gyimah, according to sources, were believed to have murdered the taxi driver for ritual purposes in the name of gold. They were slapped with two counts of conspiracy to commit murder and committing murder.

Gideon Agbesi, according to the police, is an apprentice to Kwabena Effah in the trading of Indian hemp. The three have been remanded at the Nsawam Prison, and are expected to re-appear on Friday, August 30, 2013.

Chief Inspector Essel, in a brief to the court, said on April 4, 2013, the Akwatia District Police Command received information about one Yaw Acheampong, who had been murdered and dumped at a bush at Pentemtwam, a village near Boadua and Kade.

He said the police quickly dispatched a team to the scene, took the body, and deposited it at a police morgue.

According to him, in the course of investigations, an informant hinted the police that one Kwabena Effah, who deals in narcotic drugs, had a hand in the killing of the taxi driver.

He said on April 27 and 28, 2013, the police dispatched a team to Asuom, where Kwabena Effah was residing and arrested him and Agbesi, and found on them dry leaves suspected to be Indian hemp, after searching them thoroughly.

'My Lord, during interrogation, the two admitted to possessing the Indian hemp,' Chief Inspector Essel told the court.

Continuing, he said, when Effah was questioned in connection with the murder case, he said he had in his possession a bar of gold which he intended to sell, and he sold the idea to Foster Gyimah, whether he could assist him to sell the precious mineral at a good price.

Chief Inspector Essel further told the court that Foster, upon hearing the news, advised Effah to sell the gold in Accra, where he could get a good price.

According to him, Foster then told Effah to hire a taxi cab and take them to a juju man to perform a charm that would enable them get a good price for their gold.

However, he had conspired with the two other suspects, Charles Kwadwo and unknown person, to rob Effah of his gold.

'So, they hired Yaw Acheampong (a taxi driver), and when they reached Ntoboasie junction, suspect Effah ordered the driver to stop, while the two alighted and took to a path where they said they were looking for something and would return soon.

'Effah, after a while, also alighted and went and stood beside a palm tree, leaving the taxi driver alone in the car,' he told the court.

According to the prosecutor, a driver with a Land Rover loaded with palm fruit came to meet Yaw Acheampong resting in the car, and during an interaction, advised to immediately leave the scene, since it was not safe to be there.

But the taxi driver told his colleague that he had been hired and brought there by some people, and when they came back, they would leave the place.

'My Lord, when Foster returned, he ordered Effah to surrender the gold or else he would incur his wrath. The taxi driver, sensing danger, decided to run away, but was assaulted from behind by one of the runaway suspects.

'Foster struggled with Effah and succeeded in removing the gold he (Effah) had hidden in his artificial leg. During the struggle, Effah removed a locally manufactured pistol, pulled the trigger, and in the process killed Yaw Acheampong instantly,' Chief Inspector Essel told the court.

The body, he noted, was then deposited in the bush, with Charles Kwadwo and the yet-to-be indentified suspect involved in the operation, taking to their heels with the gold.

According to the police officer, on July 9, 2013, the men and women in black uniform proceeded to the place of the incident with Effah, and upon a thorough search, found the said locally manufactured gun.

Agbesi, on the other hand, the Prosecuting Officer noted, told the police during interrogation that his master, Effah, had incessantly told him that he would buy a taxi cab.

According to the police, on the day of the incident, Effah informed Agbesi that his clients had brought the taxi, and, therefore, invited Agbesi to accompany him to take delivery of the car.

'My Lord, the two boarded a taxi to Kade, with Kwabena Effah having in his possession a locally manufactured gun. When they got to Kade, Effah handed over an ignition key to Agbesi, and ordered him to go and bring the vehicle parked at a location. On the way Agbesi heard an unpleasant noise which made him run away,' Chief Inspector Essel noted.

He added: 'When Agbesi reached home, he met his master, who told him that he was a coward. Some few minutes later, Effah told Agbesi that he had thrown his pistol away, and that he was going to search for it.

'My Lord, when Effah got to the scene, the locals suspected him to have had a hand in the murder of the taxi driver and decided to lynch him. But he persuaded them that he was a herbalist who had come to take some herbs. The people were not convinced, and Effah, sensing danger, bolted away.'

He said during further interrogation, Effah told the police that Agbesi had no hand in the death of the taxi driver, but admitted to his being his apprentice in the trading of Indian hemp. The locally manufactured pistol and the substance, suspected to be Indian hemp, were tendered in as exhibits.

On July 12, 2013, the arrested suspects were remanded into Nsawam Prisons to reappear on 26 th of same month, by the court.

But due to unknown reasons, their reappearance was delayed until Friday, August 16, 2013. The court also ordered the police to correct certain errors on their charge sheet.