'Galamsey' operators back to vocation 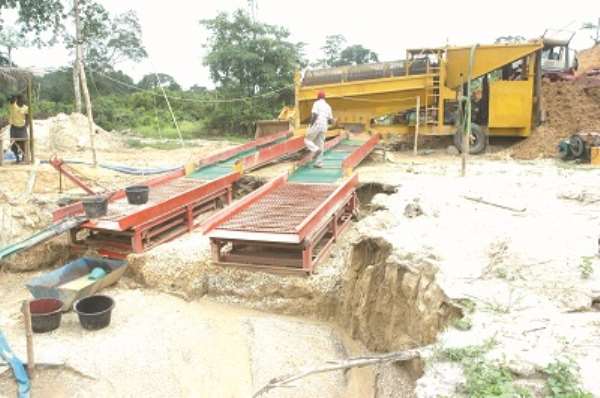 Despite the government's nation-wide crackdown on illegal small-scale mining, resulting in the arrest and repatriation of hundreds of foreigners, some of the illegal foreign miners are reported to be returning to the mining fields.

Some local illegal miners, popularly known as 'galamsey' operators, are also said to be retracing their steps to the mining fields and pits, as they attempt to continue a business that has led to the wanton destruction of the environment and water bodies.

But the NSCLNR says it will not retreat and expressed its determination to flush out all illegal small-scale miners by the end of this year.

'As long as they come back, we will arrest and prosecute them,' the Chairman of the committee, Brigadier-General Daniel Mishio, told the Daily Graphic.

He said the committee had arrested many illegal miners, including foreigners, who returned to the mining sites during a mop-up exercise.

New strategy
The illegal miners are said to have adopted a new strategy, whereby they operate only at night to outwit national security operatives.

But Brigadier-General Mishio said, 'We also conduct operations at night to arrest them.'

He said if the illegal miners thought the clampdown against them was a nine-day wonder, they should revise their conviction because 'our intention is to make sure that we flush out all illegal miners by the end of the year'.

Mr Marfo said in view of the new strategy adopted by the illegal miners, the security operation to flush them out was becoming more expensive because the task force had to be on the ground every day.

The NSCLNR draws its membership from the military, the police, the Ghana Immigration Service, the Minerals Commission, the Forestry Commission and other key national institutions.

During the first phase of the crackdown, it focused on four regions in the southern sector of the country — Ashanti, Western, Central and Eastern.

Brigadier-General Mishio said the first mission was to stop illegal small-scale mining activities by arresting the operators, both Ghanaians and foreigners, and prosecuting them.

Second phase
At the moment, the NSCLNR is engaged in the second phase of its operation in the southern sector, involving the reclamation of degraded lands and mopping up in areas where the illegal miners are adamant to abandoning the business.

The Offin, Pra and Oda rivers in the Ashanti Region are some of the water bodies badly polluted as a result of illegal small-scale mining.

The Ghana Water Company Limited (GWCL) has installed a water treatment plant on the Oda River to supply potable water to parts of Obuasi.

But, according to Mr Marfo, in view of the pollution of the river, the company had stopped the water treatment because of the high cost involved in acquiring chemicals for the treatment, thereby leaving some residents of Obuasi without access to potable water.

In respect of land degradation, the Amansie West District is said to be the worst affected in the Ashanti Region, with Otikrom, Asarekrom, Watreso and Jumakrom being extensively devastated.

'If you see it, you will not encourage illegal mining. Some farmers now depend on sachet water because the rivers are all polluted,' Mr Marfo remarked.

Brigadier-General Mishio said the reclamation exercise would involve the stoppage of mining in water bodies to restore the flow and quality of water and the refilling of degraded mining sites.

He said given the depth and vastness of the degraded lands, it was difficult to put a time line on the completion of the exercise by the committee.

He said the government was bearing the cost of reclamation, adding that the reclaimed lands would be used for commercial purposes.