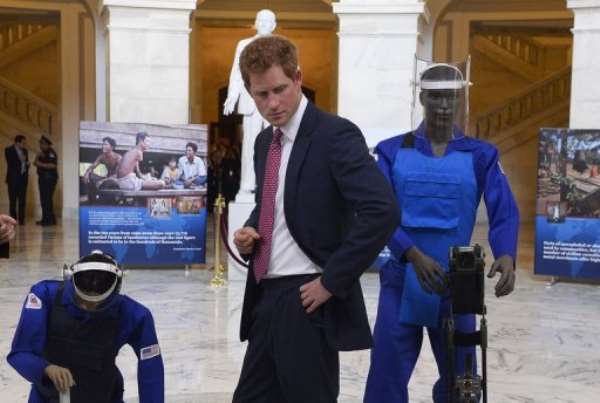 LONDON, England (AFP) - Prince Harry has a "bee in his bonnet" about some countries' failure to remove landmines in Africa, the chief of The Halo Trust clearance organisation said Sunday.

Harry, 28, has recently returned from Angola, where he saw mine clearance projects run by the trust.

The work was championed by his late mother Diana, princess of Wales.

"He is irritated about the countries that supplied these landmines ... not actually putting in any funds to clear them 25 years later," said Guy Willoughby, HALO's chief executive.

"He has got quite a bee in his bonnet about that."

Harry, fourth in line to the British throne, toured minefields remaining from Angola's brutal 1975-2002 civil war and the remote southern town of Cuito Cuanavale, believed to be the most densely mined town in Africa.

Diana, a vocal campaigner against the use of landmines, visited Angola with HALO in 1997. She died later that year in a car crash.

Harry is patron of the trust's 25th anniversary appeal.

"The minefields that his mother visited are all now shops and roads and there's even an estate agent's on one of them," said Willoughby.

"Wars may be over but many people are still unable to resume their normal lives, facing the threat of death or injury by landmines every day.

"There are still many years of work to be done.

"With support from Prince Harry, Angola and the international community, HALO will continue to work towards a mine-free Angola for the benefit of the Angolan people."

Angola remains one of the most heavily mined countries in the world, despite huge efforts since 2002 to clear the explosives.

HALO, the biggest mine clearance charity working there, said it has destroyed more than 21,300 anti-personnel and anti-tank mines in the impoverished southern African country.

The civil war left an estimated 500,000 dead, displaced four million and destroyed much of Angola's infrastructure.

Thousands of Angolans have been killed or maimed by landmines, though exact casualty figures are not known.

There were at least 533 confirmed minefields in Angola still in need of clearance as of November 2012, according to HALO.