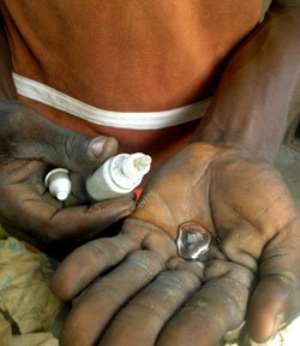 'This is the box we use; we put the gold inside and add some chemicals. It gets rid of the impurities inside the gold and gives you the pure gold,' said 27-year-old Abu Quarm, a worker at a small gold mine in Prestea.

Mercury is the chemical used by Quarm and other small scale gold miners in extracting the gold they sell to prospective buyers who intend to trade the precious mineral to gold companies.

Mercury may be an efficient chemical in the gold mining process but it is also lethal, according to Michael Ali, principal programmes officer of the Mining Department of the Environmental Protection Agency (EPA).

He said the effect of mercury is long-term.
Lurking Danger
'It has to bio-accumulate for a longer time before you can get the symptoms of contamination and the effect on the human beings.  Research didn't reveal instant reaction to mercury but we know it is a slow killer,' Ali said.

The government has not regulated the use of mercury by small-scale miners, but Ali claims the EPA is on the ground educating miners on the harmful effects of mercury on their health.

He said government has subsidized an alternative method of extracting gold, which is called 'mercury retort,' in which miners use mercury without being directly exposed to the chemical.

Moreover, the University of Mines and Technology is conducting research to try and identify alternative ways of extracting gold without using mercury, according to Ali.

Dr. Mohammed Mbenway, medical superintendent in charge of the Prestea Government Hospital, is one of the few medical officers who have seen the devastating effect of the small-scale mining on the health of the people.

He added that mercury also has a harmful effect on the entire community as it gets into the ecosystem.

Small-scale miners handle mercury with their bare hands and they inhale the fumes from the burnt mercury and dust from the crushing machines continuously into their bodies making them prone to mercury poisoning.

He said most of the miners come complaining of coloured skin itching, insomnia and hypertension, all symptoms of mercury poisoning.

Dr. Mbenway, however, said the hospital which serves over 40 communities in addition to Prestea, does not have the equipment to undertake mercury tests or treat mercury poisoning.

The Devil and the Deep Blue
Quarm said he is aware the burning of mercury in the extraction of gold can be harmful to his health but seems helpless at what alternative means to use.

'This is what we have been using since I came here to do the mining work,' he said.

Quarm said the job is risky for workers, including children, who often die from mysterious illnesses.

'I have so many friends who have died without knowing what caused their death,' he revealed.

A lot of the dead miners, Quarm said, lost their appetite, became lean, and suffered from severe cough and numbness.

Some the miners displaying the grounded gold specked stones

'Recently one of the miners, Francis Andor, a brother of the owner of the mine died suddenly,' he noted.

Most deaths are attributed to superstitious beliefs like witchcraft, said Hannah Korantang, associate executive director of the Wassa Association of Communities Affected by Mining (WACAM), a human rights and environmental mining advocacy organization that works with mining communities to develop the capacity of affected people.

'So there is a whole mystery about why people are dying. It has not been proven scientifically that the mercury is the cause of the deaths in the community,' said Korantang.

EPA has not conducted any study on the effect of the lethal substance on residents of the mining communities since 2001 when, according to Ali, large concentrations of mercury were found in the sample areas of small mining communities.

At the time, Ali said those communities were educated about the harmful effects of mercury but not much has been done since then.

Education
Dr. Mbenway said government should strengthen the education of small-scale miners on the use of substances like mercury in extracting gold.

He also advocated for the legalization of small-scale mining which is mostly done illegally so their activities could be monitored and controlled.

'There's one thing that's sure: the government cannot stop the small-scale mining because unemployment has skyrocketed,' he pointed out.

Quarm has been living in the small gold mining town in the gold-rich Western Region for almost a decade, working at the mine located on the peripheral of the town.

Miners do not only have to go deep down the surface of the earth to get the gold-specked stones but also have to spend long hours at the extraction point, grinding the stones into powder, mixing it with water, straining it (using their locally manufactured method) to add mercury, and then burning it to get the pure gold.

He explained that the process of removing the precious mineral through their amateur method was tedious.

'The mercury has been mixed with the gold already. After we burn it, it turns to yellow, and then we add palm oil to shine the gold and make it very yellowish,' Quarm said, as he pointed to the dusty equipment in the 'kitchen'.

All of this is done without protective clothing, according to Korantang.

'Because of fear of being robbed, some of them store the gold under their tongues and it has an effect on their health,' she said.

Koranteng suggested that importers of mercury should indicate what the substance is going to be used for so that authorities in charge could regulate the use of the substance especially in the mines.

'If they allow people to import quantities of mercury, they should show what they use it for. Why should people have access to mercury in the community? That is my question, and that is the responsibility of government,' she added.