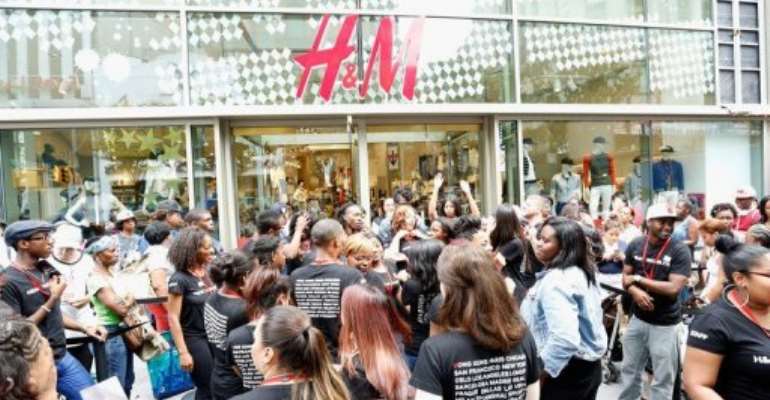 The H and M Fulton Street store opens on July 3, 2013 in the Brooklyn borough of New York City. By Cindy Ord (Getty Images/AFP/File)

STOCKHOLM (AFP) - Swedish fashion retailer Hennes and Mauritz (H and M) said Friday it would expand its network of suppliers to Ethiopia, after concentrating 80 percent of its production in Asian countries.

"We are an expansive company and are constantly looking at new potential purchasing markets to guarantee that we have capacity to deliver products to all stores in our expansive markets," H and M spokeswoman Camilla Emilsson-Falk told AFP.

"We do that by increasing the productivity on the existing production markets as well as looking at new markets," she added.

The East African country has had a long history in textile, leather and shoe production since its Italian occupation in 1939. Other apparel retailers have already begun sourcing products in the country, including Tesco and Chinese shoe-manufacturer Huajian, providing footwear to Guess and Tommy Hilfiger.

"Ethiopia is a country with strong development and we trust that we can sustain economic growth and job opportunities there," said Emilsson-Falk.

Despite strong economic growth, 9.9 percent on yearly average since 2004 according to the World Bank, the sub-Saharan nation remains one of the world's poorest. And one year after the death of prime minister Meles Zenawi, the country is still criticised for its lack of human rights by watchdog organisations.

"We did an extensive risk analysis for Ethiopia, looking at human rights and environmental issues in the country," said Emilsson-Falk. "We have worked with improvement of working conditions in our production countries for many years and will apply our experience when establishing relationships with the Ethiopian suppliers."

H and M, which has stores in Egypt and Morocco, has no concrete plans for further expansion in Africa.

Two Swedish journalists who were kept in jail for 14 months in the country were released in September 2012.