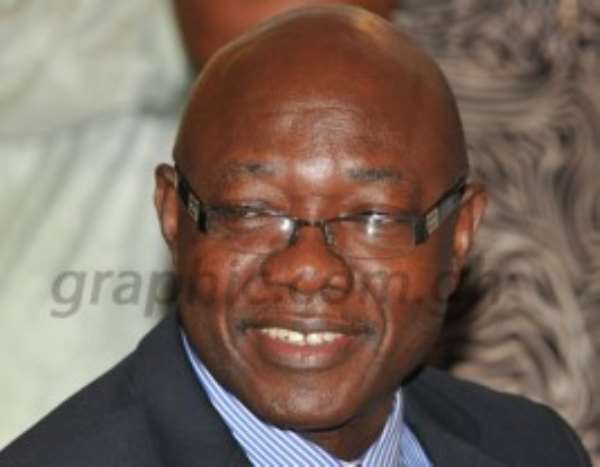 The Minister of Local Government and Rural Development, Mr Akwasi Oppong-Fosu, has with immediate effect banned the Presiding Member of the Kumasi Metropolitan Assembly (KMA), Mr Kofi Senya from attending any official programme organised by the ministry or the Institute of Local Government.

This followed alleged acts of insubordination the presiding member exhibited in public today towards the Metropolitan Chief Executive, Mr Kojo Bonsu in the full glare of the minister in Kumasi.

Mr Senya blatantly refused to sign an official document relating to the release of some monies for development projects in the metropolis when the MCE presented the documents to him for signing at the premises of the Ashanti Regional Coordinating Council this morning.

Not even the intervention by the minister would convince Mr Senya to calm down, and as he charged out issuing verbal assault on the MCE, an aide to the MCE nearly went into fisticuffs with the presiding member.

Mr Opong-Fosu who was in Kumasi to open a day's workshop on audit report interpretation for presiding members of Metropolitan, Municipal and district Assemblies (MMDAs) in the Ashanti region today, took  serious issue of the behaviour of Mr Senya, and therefore issue the ban order.

'I see the behaviour of the KMA presiding member as an attempt to undermine the authority of the KMA Chief Executive and the assembly which he presides and this cannot be tolerated,' he charged as Mr Senya who was at the meeting watched in apparent shock from his seat.

Indeed the minister made it clear that he would not tolerate such blatant show of disrespect to authority and but for 'some considerations' would have sacked Mr Senya from the workshop.

The Daily Graphic gathered that the documents were linked to the release of monies for the assembly's share of the common fund, and the issue of the installation of CCTV cameras in parts of the city.

'I am aware of the payment of winning bonuses and losing bonuses to assembly members in the on-going confirmation of MMDCEs.

'This situation is dangerous to the promoting decentralisation and if we continue along this line you will be promoting corruption in the assemblies,' Mr Oppong-Fosu said.

Mr Oppong-Fosu asked assembly members to be committed to their duties to facilitate the development of their communities.

Stressing the important role presiding members play in the decentralisation concept, he said, it was incumbent on tem to be abreast of dictates of the local government regulations so that they would not veer off their path.

He called for the reduction of waste in the assemblies so that more funds would be channlled towards development projects.

When the Daily Graphic spoke to Mr Kojo Bonsu, he expressed surprise at the behaviour of the presiding member as the money they were looking for was not going into his (MCE) pocket but for the development of the metropolis.

Mr Bonsu who had earlier addressed the workshop on behalf of the regional minister, Mr Eric Opoku, commended the inter0ministerial coordinating committee on decentralisation, the sector ministry and the Local Government Service for organising the workshop, which was expected to deepen decentralisation.

Stressing the importance of auditing in decentralisation, the MCE noted that it helped to promote accountability and transparency.

The acting head of the Local Government Service, Mr Callistus Mahama, told the presiding members that the workshop was not to make them internal auditors.

'It is not to empower you to call for bank statements of the assemblies neither it is to make you a management member,' he said