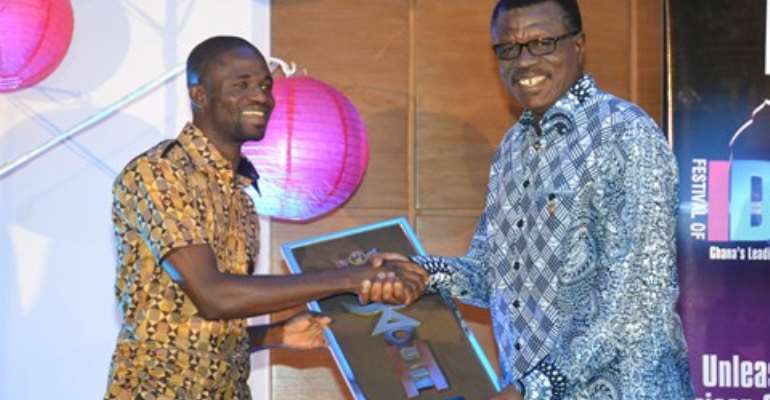 Manesseh Azure Awuni (left) being presented with an award by Dr. Mensa Otabil

The Founder and General Overseer of the International Central Gospel Church, Dr Mensa Otabil, has described Joy FM's Manasseh Azure Awuni as a treasure to Ghana.

'You're a treasure to this country, Manasseh,' Dr Otabil said after presenting a prize to Manasseh as the overall winner of the 2013 Ideas Award.

The award was organized by Legacy and Legacy to climax the 2013 Festival of Ideas. The Ideas Award, according to organizers, 'focuses on Ghanaian achievers under 40 years because the future of our continent belongs to the youth. Beyond celebrating past success, we seek to inspire greater future achievements.'

Dr Mensa Otabil, who praised Manasseh's hard work as a journalist said the award 'recognized the great works he is doing as an individual and for the nation.'

'It's not just about your stories which you write, but the story which you demonstrate,' Dr Otabil said of the reigning Ghana Journalist Association's Journalist of the Year. 'Your life is a story, and just seeing how far you have come in a short time is an encouragement to see that there is hope for Ghana and for Africa.'

Other winners of the this year's award were, Randolf Owusu, a software developer who won the third position, and Dr Yaw Perbi, Global CEO of the Hub Group who came second.

Manasseh thanked Legacy and Legacy for the recognition and urged the youth of the country to dedicate themselves to the service of humanity. 'Life is not all about the money,' he said.

Before joining Joy FM in November 2012, Manasseh worked as a freelance journalist, focusing on rural reporting and reports which highlight the plight of the poor and vulnerable in the society. In the two years of his practice, Manasseh won many journalism awards.

At the 2011 GJA Awards, Manasseh who was just coming out of the Ghana Institute of Journalism and practicing journalism alongside his National Service won three journalism awards:the Best TV News Reporter, the Best Human Rights Reporter and The Most Promising Journalist of the Year.

At the 2012 GJA Awards Manasseh swept Four Awards: The Best Features Writer in the Print Category, the Best Sanitation Reporter, the Best TV News Reporter and the overall Best Journalist of the Year

He also one of the winners of the maiden edition of the National Youth Achievers Awards for Media Excellence in 2012.

Manasseh Azure Awuni was born in Bongo in 1985 but moved to Kete-Krachi with his parents where he attended the primary, junior high and senior high schools. Manasseh is a Presbyterian. He enjoys gospel and borborbor music. He reads for pleasure and writing is his hobby.

Manasseh says he is driven by passion, the fear of God and the desire to see a fair and just society, in which there are opportunities for the son of the Minister and the son of the night watchman like himself to exploit their God-given potentials.