The poverty of policy is cause of Africa's underdevelopment - Otabil 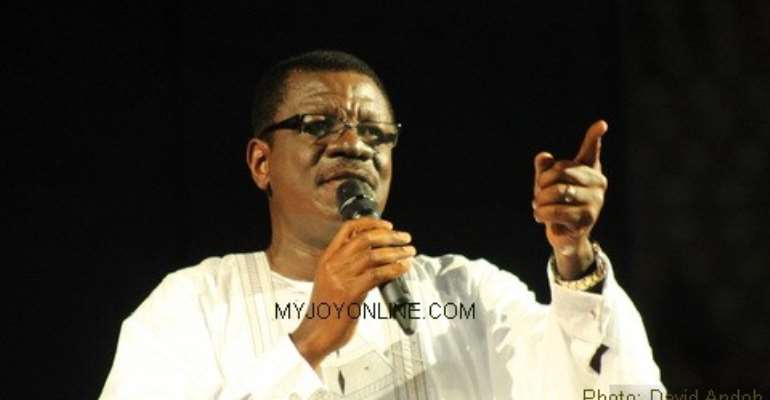 Head Pastor of the International Central Gospel Church Mensah Otabil is convinced the "poverty of policy" is the cause of Africa's slow pace of development.

He said politics is not about winning election but formulating policies that will affect the citizenry positively.

Sadly, he noted, the public service as well as the citizenry themselves have done a rather poor job at demanding accountability from politicians on the policies they promise to implement if voted into power and also to implement the policies.

He said in the absence of these policies and regulatory framework, these African countries are running like a "rider-less horse" with so much "momentum" but "lacking direction".

He was giving the key note address to climax the Festival of Ideas 2013 which was on the theme "Unleashing the new African corporate leader."

Pastor Otabil said ideas are seeds which need a sower and a good soil to germinate.

He said Ghana as a country abounds with many sowers - people with ideas- but have been constrained by the poor soil or the environment within which they find themselves.

"If Mark Zuckerberg had started facebook in Ghana, would it have grown to become a global business? If Tata, Amazon were started in Ghana, would they have grown to become global enterprises?" Otabil asked his patrons who were mainly business executives and leaders. His answer was no because according to him, Ghana as a country has failed to put in the necessary regulatory and infrastructural framework to accommodate such great minds and ideas.

Drawing inferences from the parable of the sower, Dr Otabil said many of the ideas in Ghana have fallen by the way side ie. stolen by companies; taken over by thorns ie stifled as a result of unfair competition; only few have fallen on good soil and germinated.

He said the country must begin to value its ideas and put in place the necessary laws to jealously guard and patent them.

He does not understand why Ghana's Kente cloth, music and dance have all been taken over by other countries.

Dr Otabil insisted that the country must offer support for its infant industries. He said if the country can anchor its economy and build industries around three of the commodities it has competitive advantage over - cocoa, timber and gold - this country will not be poor.

If these industries were booming, he believed, nobody would buy jewels from Dubai, Chocolate from Singapore and furniture from other countries.

He advised Ghanaians to strive to become corporate leaders and not just corporate managers.

"Think big"; "play big and scale up your activities"; "be eager to attract top talents" shirk off the "village mentality" of wanting to shrink everything to your community, he stated.

The night saw Joy FM's Manasseh Azure-Awuni who is also the Ghana Journalist Association's Journalist of the Year pick up the over-all best idea achiever award 2013.

The Festival of Ideas is a Legacy and Legacy initiative aimed at equipping and challenging young business executives, entrepreneurs to dream big and pursue those dreams until they are fulfilled.