In Egypt carnage, struggle to lay out the dead 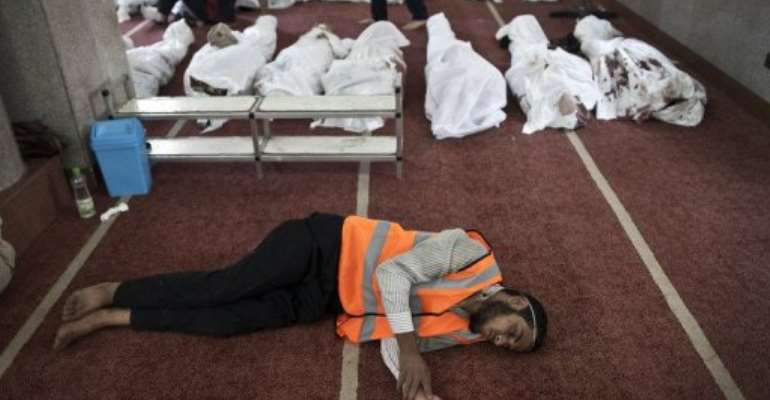 An Egyptian volunteer sleeps on the carpet of a mosque in Cairo where lines of bodies were laid out on August 15, 2013. By Mahmoud Khaled (AFP)

CAIRO (AFP) - The further the black-clad Egyptian policemen tightened the noose on the Rabaa al-Adawiya protest camp, the more desperate became the search for a place to lay out the protesters felled by their gunfire.

Amid a swarm of hissing bullets, two protesters barged into the garden of the Rabaa al-Adawiya mosque compound in east Cairo, carrying a man whose face was masked in blood.

Others offered them directions to makeshift morgues. "Take a left." "No, take a right." They stumbled with their macabre burden, leaving behind smears of blood on bystanders. "Just leave him here," one finally advised.

The morgue of the makeshift field hospital, in one of the small buildings in the mosque compound, had filled up with corpses soon after police and soldiers began their operation to clear the protest camp, after dawn on Wednesday.

Then the corpses, some with their brains shot out, encroached on the living in the nearby field clinic, in another building.

A bearded, elderly man was brought in breathing heavily, his brain partially revealed where a bullet had landed, and his eyes wide open as if in amazement.

"Say the shahada," a man standing over him said, referring to the Muslim profession of faith. "I'm sure he already did," another said, scrutinising the dying man's face, who appeared unaware of his surroundings.

More and more dead kept being brought in, some with fresh blood pouring from their heads. Soon the field hospital became part morgue part clinic.

A few buildings away, a room with a wall almost partitioning it in two was filled with corpses.

They were stacked so close that one had to apologetically walk on them, as if on stepping stones in a pond of blood, to count them all.

More bodies kept arriving. On the third floor of the Rabaa medical centre, 20 bodies were packed in a corner, past stretchers bearing other wounded men.

Outside the mosque, which sits on the crossroads used by supporters of deposed Islamist president Mohamed Morsi as a protest camp, the police bulldozed through barricades and shot their way closer and closer.

Several protesters on the front lines traded fire with the security forces. Most ran up to them with stones and petrol bombs.

Along the crossroads men sat on pavements between tents, watching placidly as bullets whizzed overhead, a stray occasionally finding a random target.

"Did you just see that?" one man said to an AFP correspondent when a bullet dropped a protester who had been standing, watching the clashes, several metres away. "You speak English?" the man asked again, in response to an expletive in English.

Nowhere was safe. In a room on the second floor of a mosque building above the field clinic, a bullet crashed through a window and grazed a man sitting on a chair just outside the room. He shut the door, as if annoyed by a draft.

Some protesters huddled together to pray. Others milled around aimlessly. They had already become inured to random, sudden death.

The health ministry said on Thursday 202 people were killed in Rabaa al-Adawiya.