I had only GH¢50 on me in court – Hopeson Adorye 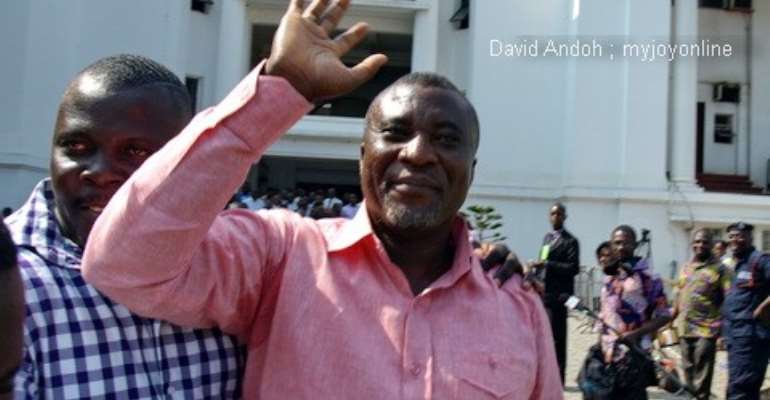 A convicted but free Hopeson Adorye, has expressed gratitude to his good Samaritan P.C Appiah Ofori, for paying GH¢2,000 fine for contempt of court.

The New Patriotic Party's Communications Team member said, at the time of the ruling on Wednesday he had only GH¢50 in his pocket.

Justice William Atuguba, the presiding judge of the panel of judges hearing the contempt charge said in default of the payment of the fine, the General Secretary and Hopeson Adorye would spend six months and three months in jail respectively.

They are also to sign a bond of good behavior and apologise on the radio stations they used in spewing out disparaging remarks.

The judges who handed down the sentences at about 2pm Wednesday, expected the fine to be paid by the close of banking hours that same day. A plea by Nii Ayikio Ottoo counsel for the convicts to extend the time was not taken.

But in a matter of hours, it was confirmed that anti-corruption campaigner and former Member of Parliament for Asikuma-Odobeng-Brakwa, P.C Appiah Ofori paid the fine on behalf of the two men.

Speaking on Adom FM Thursday Hopeson Adorye expressed gratitude to his benefactor saying, at the time he was in court he had only GH¢50 on him.

He lamented that being in opposition was not easy because financial resources are hard to come by.