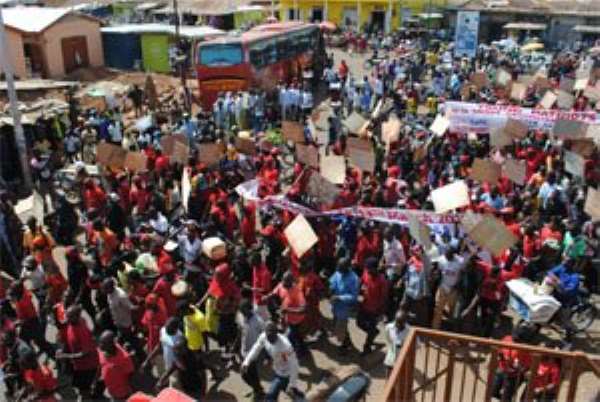 Anytime historians write about social and political progress in America, they often devote special attention to the important role of peaceful demonstrations played in that country. It stands to reason that peaceful demonstrations have been one of the most effective tools people in a democracy often use to publicly express their hopes, aspirations and when necessary, their disagreements with their government and their representatives.

There are several instances where demonstrations have brought development to countries and communities. The most recent one in Ghana was what happened in Ashiaman where the youth demonstrated against the bad state of their roads which made government to act swiftly just a day after the demonstration. It needs to be emphasized that as far back as January 1948, a Ga chief Nii Kwabena Bonne III organized a boycott of all European imports in response to their inflated prices. This is what necessitated our independence.

On 11 th May 1995, thousands of Ghanaians poured onto the streets in a demonstration dubbed “Kume Preko” to protest against the high cost of living, particularly the introduction of Value Added Tax (VAT) on items. There is no doubt about the fact that this demonstration brought some changes to the Ghanaian socio-political landscape.

In America today, the phrase 'protest march' brings back memories of eloquent and forceful mass demonstrations and it also evokes Dr. Martin Luther King's famous 1963 March, when he delivered the 'I Have A Dream' speech which captured the mind's eye of the American people and led to political, social and legal reforms that changed the whole nature of the American society. Any American will tell you that without their public demonstrations, America might not have moved towards true justice and equality as they have.

On 4 th May 2010, citizens of Papua New Guinea took an important step forward towards greater political maturity when 4,000-7,000 citizens took to the streets to peacefully petition the Government to withdraw the bill proposing amendments that, they believe, would restrict the powers, functions and responsibilities of the Ombudsman Commission, the so-called Maladina Amendment. That was the first time a mass political demonstration of this sort took place in Papua New Guinea. The government had no option than to listen. There have been several anti-homosexual demonstrations in Europe, America's and Carribean which have led to the abolishment of homosexuality in most countries.

Demonstrations all over the world reflect all shades of the political and social spectrum and they are an expression of how strongly the public feels about controversial issues that political leaders, often prefer to avoid.  The only language government officials understand is demonstration. A government that pays attention to peaceful demonstrations is another sign of a politically mature democracy.

After 56 years of independence, the capacity of the Ghana Police Service to provide protection for demonstrators should be a mark of our political maturity.  In fact, they are as important to the democratic process as other freedoms such as freedom of the press. This is why most people believe the decision by the Police not to allow the Progressive People's Party (PPP), Korle Bu Nurses, Young Patriots, AFAG and the Let My Vote Count Alliance (LMVCA) to demonstrate is a pasquinade of the 1992 Constitution.

Arguably, a free people must be able to dramatize their deepest desires and discontents, to sing, chant and shout about perceived corruption, injustice and unresponsiveness without any snag. It is true that Ghanaians can do this through the written word, the media, at meetings, in telephone calls and in friendly conversations at the markets etc, but none of these carry the same impact as a peaceful demonstration.

It is extremely difficult to understand how the Ghana Police think that they can ban demonstration over issues like corruption that have become a canker in the Ghanaian society. As a country, we cannot continue to lose GH¢3billion annually as a result of corruption. How can the Police say that they will not allow anybody to embark on a demonstration because there is an election petition at the Supreme Court? The reason the Police have assigned to the ban on demonstrations is untenable especially when a deputy minister of Information has announced to the world that the Police to Civilian ratio now stands at 1:750. Can the police be sincere to say that they lack the men to offer protection to peaceful demonstrators?

In a democracy, every citizen has certain basic rights like the right to demonstrate, that the state cannot take away from them.  These rights are guaranteed under international law. Democracy provides an environment for the protection and effective realization of human rights. These values are embodied in the Universal Declaration of Human Rights and further developed in the International Covenant on Civil and Political Rights, which is the cornerstone of any meaningful democracy. In the memorable phrase of President Abraham Lincoln, democracy is government of the people, by the people, and for the people.

Clearly, this ban from the Ghana Police Service on demonstration is an illegality. The Police cannot ban all demonstrations because demonstrations come in different forms like marches and parades, rallies, picketing, sit-ins, vigils, street theatre, etc etc. Were we not in this country when the Police, Military, Prisons, Fire Service, Immigration and Customs went on a route march (demonstration) through some principal streets in Accra to demonstrate their preparedness to counter any violence after the verdict? Why did the police allow this peaceful demonstration by the security services to take place if indeed they had placed a ban on demonstration?

Adding insult to injury, scores of reckless horn-honking motorbike riders, presumably Muslim youth, recently invaded several streets in Accra (demonstration), with total disregard for traffic, pedestrians and other road users as they demonstrated their happiness about their annual Ed ul Fitr festival while the Police looked unconcerned. Is the ban on motor riding outlawed?

Article 17 (2) of the 1992 Constitution says, 'A person shall not be discriminated against on grounds of gender, race, colour, ethnic origin, religion, creed or social or economic status'. Article 21 (1) (d) further says that, 'All persons shall have the right to freedom of assembly including freedom to take part in processions and demonstrations”.

It is instructive to note that Article 1 (2) of the 1992 Constitution says inter alia that the Constitution shall be the supreme law of Ghana and any other law found to be inconsistent with any provision of this Constitution should, to the extent of the inconsistency, be void. Ahead of the curve to the Constitution, there is nowhere in the Public Order Act 1994 (ACT 491) which gives the Police any power to ban demonstrations. In fact, the only thing that organizers of demonstrations are required to do per this Act is to notify the Police of their intention not less than five days before the date of the event.

The time is now for us to argue the toss and be interested in asking the big question; is the Police acting against the grain? Can the police say that they are asleep at the wheel? Who defines demonstration and what is demonstration as defined by Law in Ghana? The Police must understand that even though we may appear as babies in the woods, we are at the daggers drawn and at the end of our rope as a result of their decision.

Anytime we sing the Ghana National Anthem, do we not ask God to bless our homeland Ghana and make our nation Great and Strong, Bold to defend forever the cause of Freedom and of Right? How can we defend the cause of Freedom and of Right when the Police claim they have imposed a ban on demonstrations? Perhaps this would be an opportunity for us to test the Law on whether the Police have the power to ban demonstrations in Ghana or not.

Indeed, we have the opportunity to fight corruption and secure for our motherland prosperity in peace. A stitch in time saves nine.