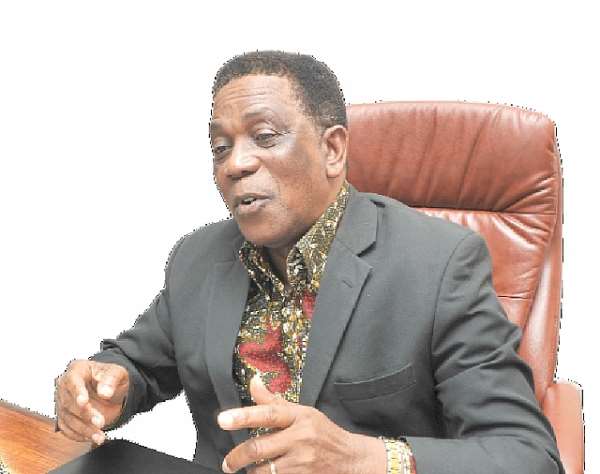 The private sector's contribution to tertiary education has seen a massive improvement in the past two decades. Today, the country can boast about 50 private university colleges which are still feeding on the few public universities producing qualified lecturers.

More university colleges will be springing up in the next few months and years as they complete their accreditation processes.

One of such private tertiary institutions which is playing a significant role in tertiary education is the Central University College (CUC), which can be said to be one of the biggest private universities in the country.

History
The CUC is a non-profit making educational initiative of the International Central Gospel Church (ICGC) charged with providing Christian-based education for the expansion of God's Kingdom.

It has its origins in a short-term pastoral training institute which was started by ICGC. It was later incorporated in June 1991 under the name the Central Bible College. The name was later changed to the Central Christian College in 1993. The college later upgraded its programmes to the baccalaureate level.

In line with national aspirations, the college expanded its programmes to include an integrated and practice-oriented business school (the School of Business Management and Administration). To reflect its new status as a liberal arts university, the name was changed to the Central University College in 1998.

Its mission is to provide integrated and Bible-based tertiary education that speaks to the needs of the Africa continent.

Chancellor of CUC
According to the Chancellor of the CUC, Dr Mensa Anamuah Otabil, the CUC was set up in response to two deep quests:

'The first is a quest to nurture a new generation of African leaders who can help in the transformational process of the continent. The second is to create a dynamic link between faith and learning to make ethical behaviour a part of expressing our faith. These two quests will continue to engage our efforts as we build this institution.'

Students and lecturers
The university currently has 9,500 students spread across the various campuses. About four per cent of the student population is Muslim. The lecturers are between 200 and 300, both full-time and part-time.

In total, there are about 470 permanent staff and faculty members.

This year alone, the university has admitted 230 international students, as against 130 last year, an increase of 80 per cent. This brings the total enrolment of foreign students to 534.

President of CUC
The President of CUC, Prof. Kwesi Yankah, told the Daily Graphic that he did not think people who set up private universities sought necessarily to make profit, since it was very expensive running those ventures.

'The cost of land and infrastructure alone is not easy, let alone paying lecturers at rates that are attractive enough to maintain them in the face of competition.

Don't forget that we have just emerged out of the Single Spine Salary Structure, which is a killer blow for many private universities,' he said.

The CUC has the School of Theology and Mission, the Central Business School, the Faculty of Arts and Social Studies and the School of Applied Sciences. These are the four pivots around which the university revolves.

Charter
Responding to the issue of charter, Prof. Yankah said he believed the university was now more than ever qualified for a charter, which would give it the right to award its own degrees.

'Giving independence or charter to a university helps strengthen it. It instils greater confidence in it and gives it a greater sense of identity,' he said, adding, 'When your creativity is operating under supervision, you cannot burst out.'

He said it was time the country looked at the issue of granting independence to private universities.

Standards at CUCThe examination hall of the university

Prof. Yankah indicated that the standards at the CUC were fairly high.

Having been on the board before assuming the presidency, he said, a time came when there was so much demand on the college that some parents sued it for not admitting their children, although they applied before others.

'I must say that graduates of the Central University have very high standards. I did not know this until I started reading about the CUC prior to my appointment. I read from parents, individuals, employers and newspapers expressing pride in the quality of education at central,' he said.

What added to the uniqueness of the CUC, he said, was the kind of programmes which could not be found anywhere.

High school fees?
On school fees, Prof. Yankah said some people had tended to ignore what went on in educating a child. It was out of the fees, he said, that infrastructure, for instance, was put up.

He said unlike public universities which had the state paying the salaries of staff and providing infrastructure, the situation was different at the private universities.

'I think the fee levels are fairly reasonable. Most private universities consult other private universities and find out how much they are charging. We are all virtually hovering around the same levels of fees. The fees are expensive only relative to the minimum that public universities charge. You would realise that we try to match money with value by ensuring the highest level of efficiency in services delivery,' he said.

The university could not state the number of students it would admit from the two streams of senior high school graduates, but Prof. Yankah indicated that although the CUC did not have any problem with space, 'we still have some challenges with classroom space relative to the number of students'.

'We are partly gearing up for this major intake but we are very careful. Private universities are not just going to take advantage of the double cohorts to flood campuses with students without infrastructure, lecturers and laboratories. We would take what our infrastructure can accommodate; we are not going to abuse the situation to the detriment of quality,' he said.

Students
For students, the establishment of the CUC has been one of the best things ever to happen to the country. They believe the school has come at a time Ghana needs the requisite human resource to fast-track its development.

A student, Bright Owusu, who has been at the school for some five years now, said, 'I am proud to be a student of the university which is the best private university in the country.'

The involvement of students in administration, he said, had been very important to the smooth running of the university and the creation of rapport between students and administrators.

Ms Deidre Makin Tetteh said she chose the CUC above the other universities four years ago because of the flexibility in the courses.

Being an Arts student, she said, she wanted to read Business Administration, but doing that in the public universities was going to be difficult.

However, at the CUC, she said, that was possible, adding, 'Today, I am a proud business student.'

Given the opportunity to start all over again, she said, she would go back to the CUC.

Another student, Gideon Edem Akorli, said the good rapport between students and lecturers was one of the hallmarks of the CUC.

Apart from the good relationship between lecturers and students, good programmes, a good and spacious environment, the recognition and acceptability of the university show that it has, indeed, been accepted in Ghana.