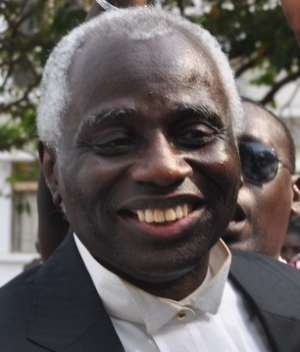 There is no doubt that the myth surrounding the so called legal luminary, Tsatsu Tsikata has been broken. In simple language the masquerade has been publicly unmasked by Dr Mohamadu Bawumia hereby referred to as Doctor Pink sheet, a novice on legal matters.

Prior to Tsatsu Tsikata's appearance at the Supreme Court as lead counsel to the Nefarious Destructive Cancer, an aura of invincibility had surrounded his personality. Many concocted stories and people's personal opinions making their rounds had it that Tsatsu Tsikata is the youngest Ghanaian to have ever passed out of the Ghana Law School. Another one was that he has never lost a case in court. The most mischievous one had it that Ghanaian Justices from the High Court to the Apex one all pay obeisance to Tsatsu whenever he appears before My Lords Temporal.

His appearance and Cross Examination of Star Witness of the Petitioners, 'Dr Pink Sheet' at the Supreme Court were therefore supposed to give credence to the invincibility of his overblown ego and plumage. However, Ghanaians including his admirers were shocked to see their idol being ridiculed and cut to size by a mere nobody on legal matters. They had expected to see a Lionel Messi in court but the man they saw during the hearing was a pale shadow of himself. It was as if Issah, the magician had lost grips of his supernatural powers and was attempting to use every trick up his sleeves to resuscitate powers from the Bearded Old Man Above. (Special apologies to Baarfuor).

It was a sorry sight to see Baba Tsatsu attempting desperately to commune with the powers above. What's happening to me, he mused. Please, do not desert me now, he muttered silently. What appeared in court during the hearings was a pitiable old man who could not get his bearings right. Desperately, he clutched unto the only remedy available to him - gesticulations. He would push back his gown onto his shoulders which were standing at 90 degrees, puff his chest out and in a thin voice reminiscent of Saddam Hussein when he was smoked out of the rat hole, he would ask the same question which Dr Pink sheet had already answered.

'D r. B a w u m i a .. '. In fact, I did not envy Tsatsu at all and his discomfort began to show in his face. He was sweating like a Christmas goat. Who wouldn't experience such a sensation when he comes face to face with Dr. Pink sheet for if iron meets steel, one has got to bend or give way? By the time the proceedings came to an end Tsatsu admitted to himself that he had met his match. Bawumia was able to bring out the worst in Tsatsu.

Tsatsu lost his cool on many occasions and had to be prodded back from his reverie by the adjudicators. Maybe, he thought he was on a different planet. But he was right here on this planet! It was the battle of the Titans. That encounter did a lot to expose the masquerade behind the real Tsatsu Tsikata. It came out that all those stories were just a façade. The real Tsikata came out as a person who is living on past glory as a result of successes chalked in the courts arising out of the partnership with Nana Addo Dankwa Akufo Addo. In the course of his cross examination, he looked on helplessly as the novice on legal matters, Doctor Pink sheet tore his arguments into shreds. One could see the agony on his face as the Star Witness of the Petitioners matched him boot for boot because 'You and I were not there'.

In the end Tsatsu Tsikata, the hunter became the hunted. Tsatsu learnt through the hard way that we live in a wonderful world where strange and uncertain things do happen. His oral submission on Wednesday, 8th August, 2013 followed the same trend. It was boring and lackluster. But did you watch the Lead Counsel of the Petitioners, Mr. Addison? Did you notice his mannerisms and gesticulations? O Man, he made the whole submission seem so simple and interesting that one would have wished he had continued till thy kingdom come. He has a way of pushing back his glasses onto his nose as if they were about to fall off. Holala, it was quite exhilarating, no doubt.

But back to the subject of this write up. In terms of who is the youngest to have come out from the Law School, it is obviously not Tsatsu. The name of Adwoa Sarfoa, the MP for Dome Kwabenya has propped up as being younger than Tsatsu when she was called to the Bar. All other myths surrounding him have fallen off like a pack of cards. But I do not envy the man at this moment. If his performance at the Supreme Court had been outstanding, all the accolades which had been heaped on him would have stayed in tack. After all, who wouldn't want to be on the side of the hero of the moment? 'Saul has killed his thousands, and David his ten thousand' easily comes to mind. But when you fall, you lose your even your die hard admirers. After all, who wants to side with an uninspiring personae? Nobody! Thus, Tsatsu Tsikata'a futile attempts to use every means, both orthodox and unorthodox to win back his lost glory were bound to fail and indeed they did fail.

Readers will agree with me that the incompetence and lack of leadership qualities of Tsatsu Tsikata came to light during his trial for willfully causing financial loss to the state. It came to light that during the period he held sway as Capo of the Ghana National Petroleum Corporation that he divided the Board and ran a one man's show. Evidence was adduced in court that the Board never met as a group to deliberate on any matter that affected the Corporation. Tsatsu preferred to work with the Board Members in their individual capacities. Whenever he wanted something done, he carried the files to the homes of those who were in his good books and held consultations with them.

When Tsatsu Tsikata was pardoned by ex President John Agyekum Kufuor, what did he do? Instead of showing gratitude and appreciation, he decided to embark on confrontation. He rejected the pardon and said it loud and clear that he would use the law courts to clear his good name. One would ask 'what good name'?

When he took that stance, one would have expected him to stay in jail and seek legal redress if indeed he was a man of principles. But not Tsatsu! He chickened out of the fight and came out of prison. Till date, he is yet to start proceedings in the courts to 'clear his good name'. Tsatsu, when are you going to court?

Now come to think of it. Some NDC members have come out boldly to at least acknowledge the contributions of Nana Addo Dankwa Akufo Addo when he teamed up with Tsatsu to fight against some obnoxious policies of previous governments at various courts in the country. Such people claim it was Tsatsu who did the paper whilst Nana Addo Dankwa Akufo Addo, because of his oratorical skills did the presentations in the law courts. Well, whether it was both Tsatsu and Nana who did the paper work or any one of them, you and I were not there and so cannot say anything on it. But one thing we are all agreed on is that the presentations in the Law Courts were done by Nana Addo Dankwa Akufo Addo.

But one thing baffles me about Tsatsu Tsikata. It makes me believe that this so called legal luminary called Tsatsu Tsikata has no scruples when issues involving his political opponents are being discussed. It surprises me that the so called people's idol, the 'Great Tsatsu Tsikata himself' was called to the Ghana Bar together with Nana Addo Dankwa Akufo Addo, Nana Ato Dadzie and many others on the same time and date. Yet when the discredited, disgruntled and self centred Justice Kpegah launched his vitriolic, unmeritorious, unpatriotic and unsubstantiated allegations against Nana Addo Dankwa Akufo Addo, Tsatsu did not choose the path of honour. Rather he chose to dine with perfidy.

Earlier on, I had thrown an open challenge in one of my write ups to Tsatsu to come out with all that he knew on the issue, but the man who is touted to be the best brain in the legal profession in the country chose to maintain a stony silence on the issue mainly because it will be to his political advantage and ambition if he kept the truth to himself.

Late President Mills had, in the heat of the 2008 Presidential Elections exhibited his warm heartedness when he came out boldly to state that as far as he was concerned and the information available to him, the Presidential Candidate of the NPP is a lawyer. He went on to classify those willfully and mischievously bent on propagating such unsubstantiated allegations and those keeping quite on the issue as being ignorant.

Out of the blues, Nana Ato Dadzie, Chief of Staff during the Rawlings Administration, and Spokes Person for the Respondents in the ongoing Election Petition at the Supreme Court put partisanship aside to rubbish such wicked and malicious allegation against Nana Addo Dankwa Akufo Addo. He said it loud and clear that he, Nana Ato Dadzie, Tsatsu, Nana Akufo Addo and others too numerous to mention were all called to the Bar on the same day.

But where was Tsatsu Tsikata? He chose to side with mischief makers by attempting to suppress the truth. Ghanaians including Nana Ato Dadzie who have genuine love for the country will have their names written in Gold because when it mattered most they stood up to be counted amongst the Bold and the Beautiful.

However characters like Justice Kpegah and Tsatsu Tsikata who have chosen the path to Golgotha will surely go down in history as selfish, dishonourable and conscienceless politicians whose main agenda on earth is to muddle muddy waters to enable them score cheap political advantages over their opponents.

I dare Tsatsu Tsikata to challenge his sentence in the law courts if he is a man of principles. What did Tsatsu and the hired press and cheer leaders not say about the Judge who jailed him? Has he repented of the accusations he leveled against the Judge who presided over the court of competent jurisdiction which jailed him? If he has, let him recant the tirade against the Judge and the entire legal system in the country.

Tsatsu Tsikata, as far as I am concerned is a drowned man vigorously attempting against all odds to swim against the tide. His appearance at the Supreme Court as lead Counsel for the Third Respondents was a futile attempt to resuscitate his waning fortunes amongst his colleagues in the legal profession. Unfortunately Mr. Pink Sheet detonated his feeble attempts to re-launch himself into reckoning.

Mr. Tsatsu Tsikata, there is only one option left for you. Go to court to challenge your conviction. But before doing that, you will have to go to prison since you have refused the unconditional pardon offered you by Former President Kufuor, the man you accused of masterminding your conviction and sentencing.

Go and fight your battles from prison. It is nearly Six Years since you rejected the pardon and vowed to use legal means to reverse the verdict. What are you waiting for?

I challenge you to go to court now if you are a man of principles! Will you accept the challenge? I await your response!!!

I'm grateful to be named by Forbes as African of the Year — ...
36 minutes ago

Covid-19: We oppose singling out African countries for trave...
36 minutes ago