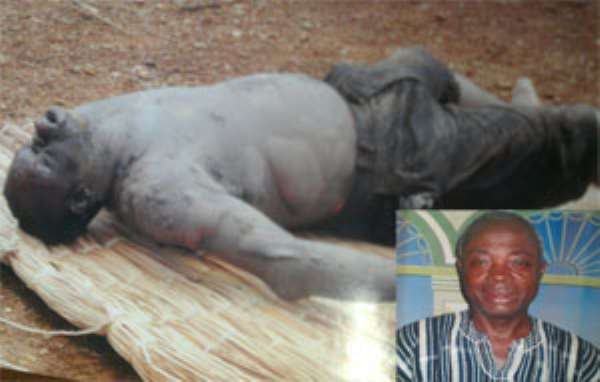 The leadership of Ghana National Association of Teachers (GNAT) in the Volta Region has expressed disgust over what they describe as serial murders of teachers in the three Krachi districts.

According to them, the situation has struck their colleagues in those areas with fear and panic, hence majority of them have expressed the intention not to return to the classrooms should school reopen for the 2013/2014 academic year.

This was contained in a statement issued by the Volta Regional GNAT and singed and read by its Chairman, Alexander Boadi. The statement served notice to government and the general public that GNAT should not be blamed for the decision of the teachers.

He recounted that since 1996 when the murders started, three teachers have been killed under mysterious circumstances and dumped in rivers. However, the Police, the chiefs of the various communities and other public officials have refused to show commitment in dousing the horrid development.

The first incident happened on April 7, 1996 where Emmanuel Manu, formerly of Dambai D/A Primary 'A' School was murdered in cold blood and dumped on the bank of River Oti, near Dambai.

The second incident was on December 25, 2002, where Adifli Johnson, a teacher at Lonkortor, a fishing community in the newly created Krachi Nchumuru District was murdered and dumped in the Volta Lake in the area.

Though some suspects were arrested and remanded, they were later set free. Although the school was shut down due to the incident it is currently running with sufficient teachers.

The latest incident happened in July this year when a head teacher, Manase Marshall Mensah of Hunorkope D/A Primary School went missing on July 7. He was later found dead floating on the Oti River on July 10, 2013. It is this latest incident that has sparked the boycott ambition of the teachers in the three Krachi districts.

According to the investigations of GNAT which had been corroborated by the Police, the deceased had called his Circuit Supervisor (CS), Mpanga Francis and informed him that one Awute Klutse (crippled) had tipped him off about a plot to kill him (the deceased).

The deceased sought refuge at a nearby village, Odomi on the advice of his CS. On the evening of July 7, a six-man delegation from Odomi with the deceased went to Hunorkope to unravel the reason for the plot, but all denied knowledge of the plot.

Later that evening two men from Hunorkope went to Odomi to rebuff the allegations and assured the leaders of the deceased's security. The deceased was released to the two at 11:00pm that night.

The next day, July 8, however, the deceased was pronounced missing. A delegation was then sent to the deceased's family at Kitare in the Northern Region to check if he was there. On reaching the bank of Kitare the deceased's smock and a paddle in a canoe which had gone missing in Hunorkope were found.

The family noted that they had not seen their son for a long while. Consequently they joined the CS and others in a search which amounted to nothing. The informant, Awute Klutse, was then arrested on July 9.

The next morning, July 10, 2013, the deceased's body was found floating on the Oti River.

Based on a tip off, three suspects were arrested while the corpse was taken to the Kete-Krachi Hospital for autopsy.

It was later transferred to the Police Hospital in Accra where a Pathologist, one Alina Rodriguez Grinan revealed that the deceased died basically of drowning with the direct cause being asphyxia by submersion.