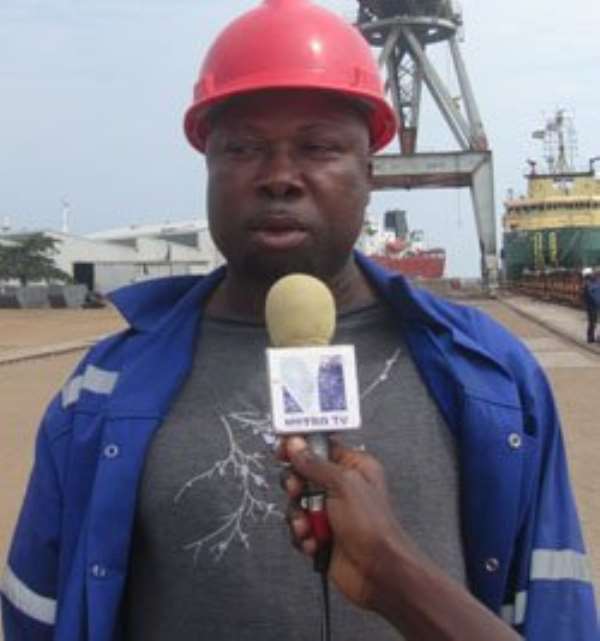 The oil company's management, which has rented a portion of PSC Tema Shipyard to carry out maintenance work on its equipment, was said to have stormed the shipyard to interview electricians and engineers but the move caused confusion and delayed work.

Government is said to be in consultation with the Trades Union Congress (TUC) over its decision to allow Tullow Ghana to construct a second FPSO at PSC Tema Shipyard.

But it appears the workers do not understand the issues at hand. They suspect that Tullow Ghana wants to acquire the PSC Shipyard and operate it.

Eric Tibu, Tema Shipyard Workers Union Vice-Chairman, speaking to CITY & BUSINESS GUIDE, in an interview, said the workers were astounded when they were called by some persons, believed to be from Tullow management, to take part in an interview without any explanation.

Misunderstanding
'We refused to attend the interview since we have been working at the Tema Shipyard for several years. We therefore cannot attend a new interview. No, we cannot. It is surprising and disappointing because it is only when a new management takes over an organisation that they carryout fresh interviews for workers, so why does Tullow want to interview workers when there is no agreement.'

Mr Tibu wondered why the investigative committee that recommended that Government should collaborate with a local investor to rescue PSC Tema Shipyard from further deterioration and strengthen its capacity to offer services in the oil sector was resisting moves by the GPHA to that effect.

He called on Government to implement the committee's recommendations as contained in a report to bring sanity to the Tema Shipyard, adding that Government is disregarding the content of the report. 'What then is the essence of the committee's establishment to see to the situation with the company.'

According to him, Tema Shipyard is an important and strategic asset to the country.

If Government hands over the management of the PSC Tema Shipyard to the Ghana Ports and Harbours Authority (GPHA) it would go a long way to transform the place and stop the outsourcing of jobs to foreign companies, he said.

Workers' agitation
Faruk Abdul Razak, Tema Shipyard Workers Union Organiser, on his part, wondered why Government had failed to respond to proposals submitted by the GPHA to manage the company profitably.

He said: 'By virtue of what Government is doing, it has a different agenda to hand over the company to a private organization and we are going to protect the public interest just as our forefathers did some years ago for us to be employed here today.

Ministry clears air
Meanwhile, the Ministry of Transport has denied a report in the Daily Graphic in its August 6, 2013 edition that claimed Government had transferred the management of PSC Tema Shipyard to Tullow Ghana Oil.

A press release issued and signed by Dzifa Attivor, Minister of Transport stated categorically that 'there is no arrangement with Tullow Oil to take over part of the PSC Shipyard on a build, operate and transfer (BOT) as published by the Daily Graphic.'

The Ministry explained that Tullow is in talks with Government to build components of its second FPSO in the Tema PSC Shipyard instead of building them at a foreign facility.

'Tullow will therefore upgrade the Shipyard to a level necessary for the fabrication of the components. Tullow will further help with equipment upgrade and technological transfer, but will have nothing doing with the management of the Shipyard.

This decision is informed by the Mahama administration's insistence on certain local content requirements for companies in our oil sector,' the statement added.

The Tema PSC Shipyard, which is now a 100 percent state-owned facility, is in a state of disrepair and requires some upgrade in both equipment and human resource to meet standards required for the expected works on the FPSO.

Tullow's preparatory works
According to Mrs. Attivor, Tullow Oil, per the discussions with government, has been asked to solely preâ€finance the upgrading works at the Shipyard to meet the standards of a modern and international ship building yard.

'The works include the upgrading of infrastructure, plant, machinery and equipment to ensure that the Shipyard is well equipped and capable of handling all jobs, including the works envisaged by Tullow.'

The Minister for Transport noted that after the upgrade, Tullow Oil, like any other client, would apply to the shipyard to use its facilities.

Workers fears allayed
The shipyard would therefore continue to be under the management of PSC Tema and not under Tullow, with Tullow treated as a client.

The statement noted that under the stated agreement to be finalized with Tullow there would be no costs to government for the upgrading works.

Tullow would pay the Shipyard for the use of the facility to build the FPSO, out of which the upgrading costs will be subtracted, and above all, 'jobs would be created and the required expertise needed to handle shipyard works acquired and enhanced through the training exercise.'

The statement further noted that discussions with Tullow, when finalized, would help in positioning the Shipyard to meet the growth in the maritime industry.