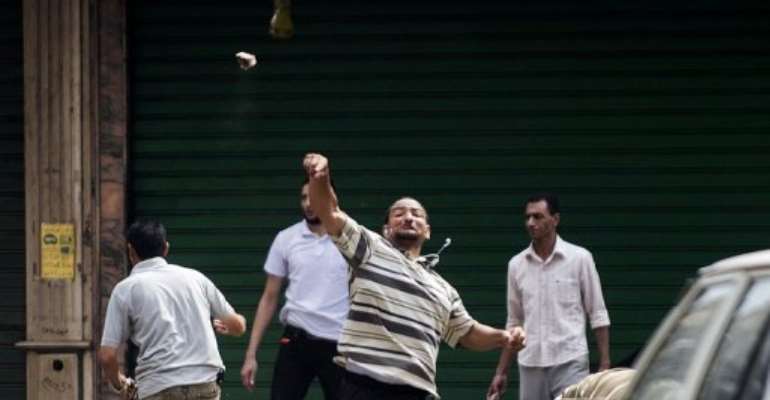 CAIRO (AFP) - At least 17 people were killed on Wednesday as police moved in to disperse two huge protest camps set up in Cairo by supporters of Egypt's ousted president Mohamed Morsi.

An AFP correspondent who counted the bodies at a makeshift morgue at the Rabaa al-Adawiya camp said many appeared to have died from gunshot wounds.

Egypt's interior ministry said two members of the security forces were killed in the operation.

Morsi's Muslim Brotherhood urged Egyptians to take to the streets in their thousands to denounce the "massacre".

"This is not an attempt to disperse, but a bloody attempt to crush all voices of opposition to the military coup," Brotherhood spokesman Gehad al-Haddad said on Twitter.

The Rabaa al-Adawiya protest camp, where several Brotherhood leaders are staying, "is calling on Egyptians to take to the streets to stop the massacre," Haddad said.

Intense clashes raged on one side of the Rabaa al-Adawiya protest camp, as automatic fire could be heard.

Security forces surrounded the camp early morning and fired tear gas as they began moving in on the thousands of pro-Morsi protesters who have defied ultimatums to end their protests.

Canisters of tear gas rained down on tents set up by the protesters at one end of the Rabaa al-Adawiya camp, sparking pandemonium that saw protesters running in all directions.

Men in gas masks rushed to grab each canister and throw them in small containers of water, as the main stage near the mosque of the protest camp blared Islamic anthems and protesters chanted "Allahu Akbar" (God is greatest.)

"It is the beginning of the operation to disperse the protesters," a security official told AFP, confirming that similar steps were being taken at the Nahda square camp.

Witnesses spoke of bursts of gunfire but could not say who was doing the shooting.

Television footage showed injured people being carried to a makeshift medical centre as well as police dragging away defiant protesters.

Clashes had erupted during the night between supporters and opponents of Morsi in Cairo's Giza neighbourhood, which left at least 10 people injured, security officials told AFP.

State Department deputy spokeswoman Marie Harf said Washington regarded freedom to protest as a "key part" of the democratic process but would be concerned by reports of violence.

"We encourage the interim government to allow people to protest -- that's a key part of moving forward with the democratic process, and of course, would be concerned by new reports of violence."

The United States, which provides $1.5 billion in mostly military aid to Egypt every year, maintains close ties to the Egyptian military but says it favours a rapid return to elected civilian rule.

Morsi, Egypt's first elected president, was overthrown by the military on July 3 with popular backing.

His supporters had said nothing short of his reinstatement will persuade them to disperse.

Clashes between pro- and anti-Morsi demonstrators and security forces have killed more than 250 people since the end of June.

On Monday, the judiciary extended Morsi's detention for a further 15 days pending an investigation into his collaboration with Palestinian group Hamas.

The Muslim Brotherhood, banned in 1954 and repressed by successive governments, won both parliamentary and presidential elections in 2011 after the ouster of veteran strongman Hosni Mubarak.

The Brotherhood is demanding the release of Morsi and other top party figures who were detained by the military on July 3.

Prosecutors have set an August 25 date for the trial of the Brotherhood Supreme Guide Mohammed Badie and his two deputies.