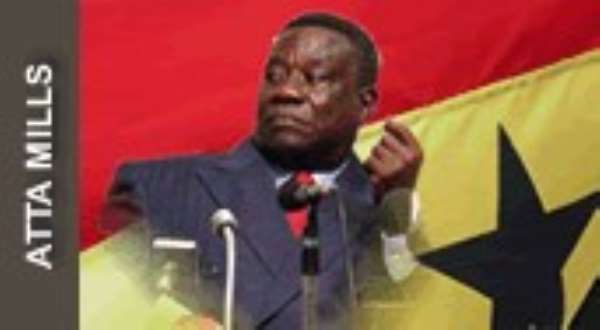 Cape Coast Jan. 25 GNA - Professor John Atta Mills, presidential candidate of the National Democratic Congress (NDC) on Sunday urged Ghanaians to keep faith with the NDC and vote it back into power to help solve the economic hardships facing the nation.

Prof. Mills said the NPP government had failed Ghanaians and people should be wise enough to vote it out in the coming election and replace it with a more committed party like the NDC.

Prof. Mills who said this at a rally to round off an early morning keep fit exercise organised by the Cape Coast constituency branch of the party urged members and supporters to register when the voters' register opened in march.

The exercise, which started at 5 am, took the members through the principal streets of Cape Coast amid singing and dancing by the NDC supporters ending at 'London Bridge' where various party executives including the parliamentary candidate Barton Oduro addressed them.

He said it was only by registering and voting for the party that it could win the election and reiterated the high taxes being changed on goods and services in the country adding that the economic policies of the NPP government were too hash for Ghanaian.

"What l have seen today clearly shows that the NDC has a chance to win the election this year and everything possible would be done to send the party back to the Castle," he stressed.

Mr Oduro was all praises for the members and supporters and urged them to transfer the support into votes in the coming elections. He advised them against insulting and violent politics and urged them to exercise restrain to ensure incident free elections. Later the Women's wing of the party presented food items worth two million cedis to the Children's Ward of the Cape Coast Hospital.

The Hospital Administrator Mr William Tawiah received the items, which included, bread, oranges, pineapple and eggs and thanked them for the gesture.