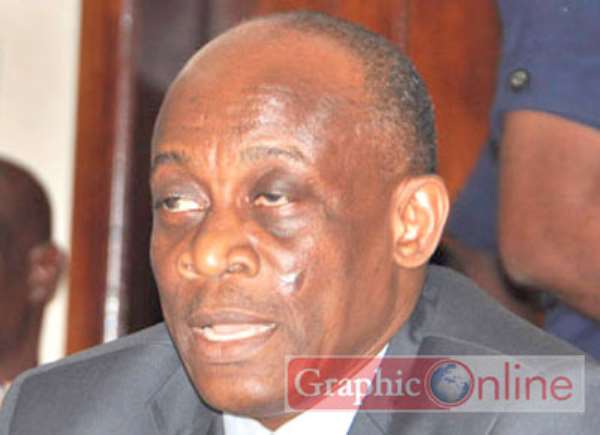 The week ending August 9, saw a lot of national discussions on various sticky issues. Among them were discussions around the sustainability of the Single Spine Pay Policy (SSPP), mid-year economic performance and management of the country's oil and gas revenues.

The Fair Wages and Salaries Commission organised the pay policy forum with the Institute of Financial and Economic Journalists (IFEJ) organising a mid-year budget tracking forum that brought to the fore a number of issues including the need to tackle the country's cyclically recurring fiscal and current account deficits.

Pay policy and domestic revenues
The discussions made clear the fact that worker compensation and emoluments (salaries and allowances) of public sector workers consume approximately 70 per cent of all revenues collected within the economy. This leaves little funds for the government to invest in other important projects and programmes for the people of Ghana.

Interestingly, within this limited fiscal space, governments are able to raise resources from other sources to finance projects and programmes which are often not budgeted for within a particular year. This leads to government over-spending and creates huge domestic borrowing with some unpleasant consequences on the economy.

In the 2013 budget, the government outlined some items areas that contributed to deficit in 2012. 'Shortfalls in revenue and grants combined with higher spending were the sources of the fiscal slippage in 2012,' the 2013 budget stated.

It outlined the details as GH¢708.2 million shortfall in corporate income taxes; GH¢389.4 million shortfall in grants from development partners (amounting 0.5 per cent of GDP); GH¢1.91 billion additional outflows as a result of implementing the SSPP; higher interest cost amounting to GH¢245 million; utility and fuel subsidies of GH¢339 million; and higher spending on goods and services (more than budgeted government spending) amounting to GH¢354.7 million.

It is clear from this information that fiscal deficit, which amounts to expenditures in a particular budget year outpacing the revenue inflows, comes from various sources. However, the inability of a government or its agencies to collect taxes becomes the major contributor of budget deficits.

The way outEconomic analyst, Mr John Gatsi, has called for the need for the tax revenue authority to intensify its efforts, particularly by chasing companies indebted to it. He believes that a chunk of the underperforming domestic tax revenue is due to this phenomenon.

It stands to reason, therefore, that the SSPP is sustainable if two things are achieved. First, the need to resource public sector workers, set up performance criteria for them and monitor for compliance.

It begs the question why the state should hurry in giving employees higher pay without putting in measures to check abuse (ghost names) and also compensate them with systems that would enable them perform better than their previous level.

Second, since the sustainability of the pay policy is directly related to domestic revenue levels, the government should find ways to realise the much-talked about 'roping in the informal sector of the economy.'

The Finance Minister, Mr Seth Terkper, on August 7 classified the informal sector in addition to professionals as areas which are 'difficult to tax'. This terminology is well-known in taxation as 'DTT'. A tax expert himself, it is heart-warming that the finance minister has identified this challenge.

The next step is for the adoption of suggestions by another tax expert and consultant, Mr Ali Nakyea Abdulla that the Ghana Revenue Authority (GRA) should liaise with professional bodies such as the Ghana Medical Association, The Ghana Bar Association, the Ghana Institute of Engineers, the Institute of Architects and the Institute of Chartered Accountants, Ghana, to engage its members that evade tax to honour their tax obligations.

His suggestion is that since the existence of such professional bodies are backed by law, it should be possible for the GRA and the government to instruct that licensing and membership should be effected only upon ensuring that the member in question or company had honoured their tax obligations.

In addition to these, resourcing the public sector to perform better would in itself yield higher revenues for the government, especially by State-Owned Enterprises that generate income into the national kitty. Indeed, these professional groups and the informal sector are difficult, but not impossible, to tax.

The govermment as well as every individual in leadership position needs to think outside the box to ensure that emerging challenges are overcome for the economy to remain resilient going forward.