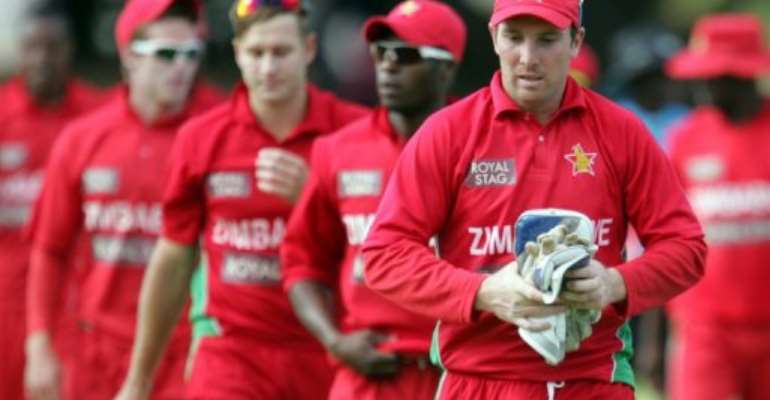 Zimbabwe's Brendan Taylor leaves the field with teammates after loosing to India, in Harare, on August 3, 2013. By Jekesai Njikizana (AFP/File)

HARARE (AFP) - The Ashes may be widely regarded as the most important contest in cricket, but try telling that to the cash-strapped Zimbabwean side that recently hosted India for five one-day internationals.

As England and Australia engaged in the game's oldest rivalry, the Zimbabweans were crushed 5-0 by the world's top-ranked team, making it impossible to forget the primary objective of the series: to keep cricket alive in an ailing country.

Zimbabwe Cricket's financial statement for 2012 confirmed that its liabilities exceeded its assets by $8.36 million, and listed more than $15 million worth of loans -- some of it from the International Cricket Council.

"The latest loss you will have seen from our report is that we're down about $4.2 million last year.

"We're carrying serious bank loans now which basically stagger us from one four-year cycle to the next."

Although ZC was expected to make between $6 million and $8 million from the India tour, Chingoka confirmed that it will incur a loss of around $1 million per tour from hosting Bangladesh, Pakistan and Sri Lanka in 2013.

Cricket in Zimbabwe is already functioning in a threadbare environment, with ZC cutting its disbursements to franchise cricket by more than 50 per cent in 2012, and expenditure on players and officials falling from $4.48 million in 2011 to $2.14 million last year.

That may be a pittance on which to run a nation of Test cricketers, but without any answers to the current financial problems, Chingoka suggested that belts may be tightened further

"We could say, for us to avoid a problem at the bank, let's do away with junior tours, but what does that do for those kids in terms of development?" Chingoka said.

While some will have sympathy for ZC, given the nature of cricket's economy, which makes survival difficult for nations with a small cricket following, there is a strong sentiment within Zimbabwe that the organisation fails to put the players first

This is borne out by the figures, which show that ZC spent almost as much on administration in 2012 as it did on cricketers and officials, but Chingoka maintains that the players' salaries "would do quite well in commerce and industry in this country".

"That mentality is a dangerous one, because they make 100% certain that the players are aware of that, but they expect them to go and compete in an international environment," said Heath Streak, whose contract as bowling coach was not renewed this year due to lack of funds.

"Until that mentality changes amongst our admin we'll keep going down that slippery path until we get to our final demise."

In April Zimbabwe batsman Craig Ervine chose a contract with Lisburn Cricket Club in Northern Ireland over an offer from ZC.

India's visit has kept his former teammates in a job, but the conditions of employment may force them to seek similar opportunities abroad as cricket's future in Zimbabwe comes under the microscope once more.