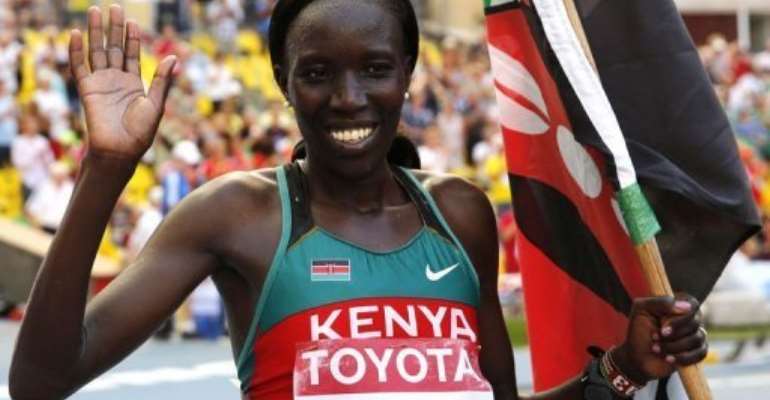 Edna Kiplagat celebrates after winning the women's marathon at the World Athletics Championships in Moscow. By Adrian Dennis (AFP)

MOSCOW (AFP) - Kenya's Edna Kiplagat became the first woman to retain the marathon world title when she eased home on Saturday to earn the first gold medal on the opening day of the World Athletics Championships.

Kiplagat said that she was extremely happy to have made history.

"I'm delighted I was able to defend my title successfully. I got confident I was going to win at the 40km mark when I upped my pace," she said.

Straneo, whose career took an upward turn after having her spleen and gall bladder removed in 2010 describing the operation as similar to giving birth, said she hadn't even thought she would win a medal.

"I am the surprise of the day I never thought I would win silver. I just spoke to my two boys, who are six and seven, on the phone but I am not sure they actually watched me on TV," said the 37-year-old.

Fukushi too was more than surprised at finishing third.

"I wasn't aware that I was third until I entered the stadium! It made the experience all that more enjoyable," said the 31-year-old.

Olympic champion Tiki Gelana of Ethiopia never featured on her return to competition after being knocked over by a wheelchair competitor during this year's London Marathon and was one of 23 not to finish in what were testing conditions.

Straneo set the pace from the off but was closely watched by the pursuing pack of 11.

The group had been reduced to seven at the 10km mark with the 37-year-old Italian still leading from Melkamu. However, Japan's 35-year-old 2004 Olympic champion Mizuki Noguchi's hopes of a remarkable title looked to be over as she had been dropped by the lead group.

Kiplagat was back in 15th place some 29sec off the leaders, but the Kenyan moved up a gear and edged her way back into contention.

Within a couple of kilometres she had hauled in the septet - including Kipketer and compatriot Lucy Kabuu - and joined the leading pack as they passed the Kremlin.

Straneo, who was eighth in the Olympics, was still the hare at the 15km mark, while the Kenyan trio and Ethiopians Melkamu and Tadese and Japan's 2006 Asian Games 10,000m champion Fukushi looked content to tag along in her wake.

The medallists looked to be settled at the 30km mark as Fukushi was dropped, leaving Straneo still in front while Kiplagat and Melkamu tucked in behind her.

However, Melkamu, fourth in the London Marathon this year, also hit a wall and shortly afterwards Straneo was left alone with Kiplagat.

Melkamu wasn't to even have the consolation of a bronze as she pulled up and retired from the race after being passed by Fukushi, who trailed the two leaders by more than a minute after 35km.

Kiplagat, having allowed Straneo to set the pace, finally made the decisive move just after the 40km mark, and this time the Italian had no answer, contenting herself with the silver.