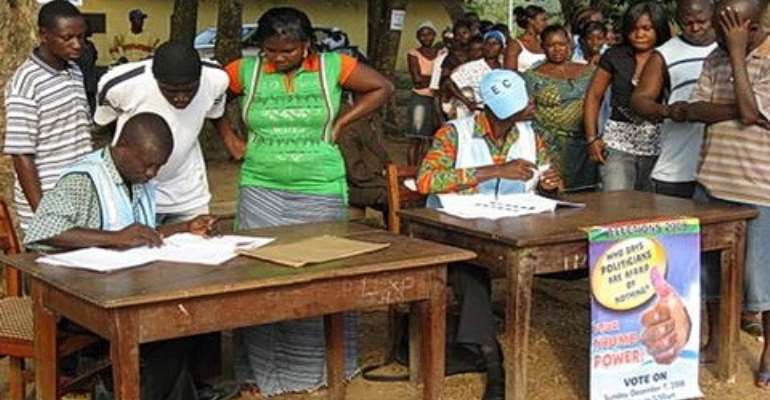 I have always suspected that there was clearly something wrong with having New Patriotic Party (NPP) polling agents' signatures appended to pink sheets at polling stations where the authoritative, and definitive, signatures of presiding officers were conspicuously missing. The latter omission, a patent constitutional anomaly, clearly pointed to the fact that these presiding officers were in vehement disagreement with the conduct of polling under their nominal supervision. Not appending their definitive signatures to the "almighty" pink sheets, therefore, symbolized their unmistakable protest against the flagrant travesty that was the Afari-Gyan conducted 2012 general election.

I had not afforded scribal - or literary - vent to my suspicion because I had no forensic evidence to back up my well-founded misgivings. Now, though, eight months after the Afari-Gyan/Mahama travesty, a staunch hack and rabid propagandist in the pay of the National Democratic Congress (NDC) has unabashedly let on to the effect that, indeed, a critical mass of NPP-sponsored polling-station agents were indisputably coerced into signing the pink sheets whose criminal falsification enabled Dr. Kwadwo Afari-Gyan, the Electoral Commissioner, to fraudulently declare then-Candidate John Dramani Mahama as winner of last December's presidential election.

The preceding confession was contained in an article captioned "My Written Address on the NPP's Petition"; and it appeared in the Ghanaweb.com edition of August 7, 2013, as well as on several major Ghanaian-oriented media websites. The confession itself appeared in the following verbatim-quoted sentence: "The Party's [Read: NPP's] accredited polling agents signed the election declaration forms to indicate their ACQUIESCENCE that the elections were without fault and the results a true reflection of the voters' political will."

Now, this line of reasoning is patently absurd. For any speaker of the English language with a remarkable appreciation of the word knows that one only "acquiesces" under undesirable circumstances, out of either a great fear and concern for one's life and personal safety, or for the sake of conflict avoidance. One would, ordinarily, not "acquiesce" to a situation of perfection or unquestionable integrity. And we cannot chalk this logically striking, if also ineluctably contradictory choice of words, on the part of the writer, to sheer happenstance. The writer boasts of a terminal degree in language and pedagogy, if we are to accept his self-testimony as being worthy of our confidence.

In the article also, the blowhard NDC hack caustically faults Mr. Philip Addison, the astute counsel for the petitioners, for inordinately grounding his forensic evidence on the pink sheets, rather than the ballot papers themselves, gratuitously forgetting to observe the fact that Dr. Afari-Gyan, the Electoral Commissioner, had himself grounded his fraudulent declaration of Mr. Mahama as the winner of Election 2012 on data recorded on the pink sheets, rather than the raw ballot papers, a practically unwieldy and unwise proposition.

You see, so desperate are the key operatives of the so-called National Democratic Congress and their media goons and hirelings that they have an extremely difficult time differentiating between reason-based argumentation and agitprop. This is the danger which the country faces in the run-up to the delivery of the Supreme Court verdict on Election 2012. And this is why I have consistently and persistently counseled the proverbial movers and shakers of the main opposition New Patriotic Party to be forearmed and resolutely prepared to drive these Trokosi Terror-Mongers into the ocean, should it become the most constructive alternative.