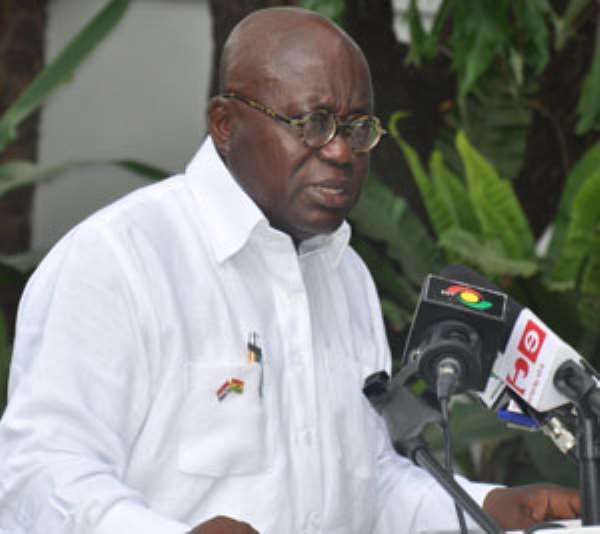 It took quite awhile, but finally Mr. Tsatsu "The Thief" Tsikata, counsel for the ruling National Democratic Congress (NDC), in his final summation before the Atuguba-presided Supreme Court panel hearing the Election 2012 Presidential Petition, seeking to nullify the fraudulent declaration of Mr. Mahama as winner by Dr. Kwadwo Afari-Gyan, the Electoral Commissioner, deafeningly acknowledged that, indeed, the 2012 general election was unduly attended by massive irregularities of criminally epic proportions.

What the foregoing means is that Mr. Tsikata perfectly agrees with the Presidential Candidate of the main opposition New Patriotic Party (NPP), Nana Addo Dankwa Akufo-Addo, that on December 11, 2012, or thereabouts, Dr. Afari-Gyan curiously, and criminally, upended the globally established conventions of democratic culture, and justice, by flagrantly declaring the forensically proven loser, Mr. John Dramani Mahama, as winner of Ghana's sixth presidential election in the Fourth Republic (See "Lawyer Abotsi: Mahama Would Be Deemed By Law Never To Have Been A President If..." MyJoyOnline.com/Ghanaweb.com 8/7/13).

Of course, the Oxbridge-schooled Mr. Tsikata, a notoriously litigious attorney and a morbid disrespecter of members of the highest court of the land, did not use the exact words used in this article, at least not just yet. But he definitively arrived at the same conclusion as his political arch-nemesis. And on the latter score, we quote from the above-referenced news article, bylined Edward Appiah: "In his last address, Tsatsu Tsikata who is counsel for the third respondent - the National Democratic Congress (NDC) - said the demands of the Petitioners are [sic] nothing but a request for the judges to impose a retroactive penalty on innocent voters who went to queue in the sun to vote, a request that is not backed by law and should not be taken seriously."

This is rather interesting, for what the pathologically disdainful Mr. Tsikata is saying, by his devious use of the phrase "retroactive penalty on innocent voters," a patent contradiction in terms, to be certain, is that, indeed, a crime was committed in Election 2012, but that, somehow, punishing the criminal suspects involved would by itself constitute an unnecessary delay in the condign execution of such legitimate punitive measure, which Mr. Tsikata predictably finds to be anachronistic but not in any way illegal, though rather curiously unfair.

In other words, since the electoral fraudsters were not opportunely stopped in their tracks during the commission of their decidedly wanton act of criminality, somehow, the statute of limitation governing such punishment which, by the way, Mr. Tsikata deems to be perfectly legitimate has, nonetheless, effectively expired. Well, if the dear reader is having a hard time trying to make any remarkable sense of Mr. Tsikata's logical tack, or line of reasoning, s/he is not altogether alone. Mr. Tsikata's ratiocination simply does not muster the rules of common sense.

What is fascinating here is that rather than aptly fault his clients, that is, the key operatives of the National Democratic Congress and, in effect, Mr. John Dramani Mahama and his forensically proven criminal accomplice, Dr. Kwadwo Afari-Gyan, the Electoral Commissioner, Mr. Tsikata finds it to be more politically convenient to blame the veritable victim, the innocent Ghanaian voter whose mandate was so viciously and effectively undermined and corrupted by these criminally minded political cynics.

Needless to say, the criminally convicted Mr. Tsikata is quizzically able to arrive at such a no-brainer conclusion because he has absolutely no regard for the intellectual acuity and integrity of the average Ghanaian voter. I hope the members of the Atuguba-presided Supreme Court panel hearing the Akufo-Addo/ New Patriotic Party petition are paying sedulous attention.