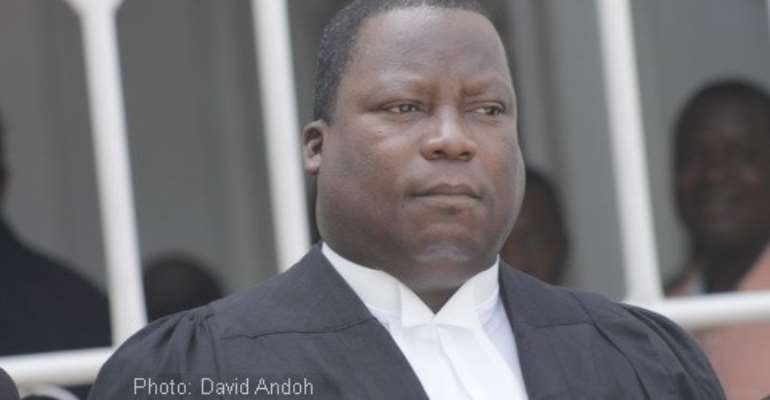 Empty barrels they say make the most noise. And if this saying is anything to go by, then we saw a real demonstration of it when lawyers for the respondents and petitioners gave their oral addresses at the Supreme Court (SC) in Accra on Wednesday.

The addresses were the last leg of events before the nine-member SC Justices make the final determination of the petition case which was initiated by NPP's losing presidential candidate, Nana Addo Dankwa Akufo-Addo and Co. to challenge the results of the 2012 Presidential Election which was freely and fairly won by President John Mahama.

On Wednesday, the stage was therefore set for Philip Addison, the loud-mouthed counsel for the petitioners, to roll over the respondents with his so-called compelling evidence and argument that is seeking to zip-out over 4 million voters who exercised their constitutionally mandated responsibility.

The NPP supporters who had so much hope in Philip Addison and the bogus petition case were expecting something dramatic that will help them to hit a home run in their pursuit of winning the 2012 Presidential Election through the backdoor and not through the ballot.

But when it got to the turn of Philip Addison, everybody who was either listening to the radio or watching the television indeed saw that the gregarious Philip Addison looked caged, flat and deflated as he failed to sparkle.

Philip Addison, instead of going straight to the point to convince the justices to give him victory over the respondents, started his address by spending 7 precious minutes talking about the number of pink sheets submitted by the NPP to the SC. He did not either himself when he further veered and started talking about the KPMG audit report that exposed the duplicity of the NPP.

There were so many NPP supporters who could not believe what Philip Addison was doing. Disappointment even showed on the faces of Mr Akoto Ampaw and Gloria Akuffo, two of the lawyers on the side of the petitioners, who perhaps did not know what the heck Philip Addison was doing talking about nothing concrete but the number of pink sheets submitted to buttress their case.

This man, Philip Addison perhaps did not know the import of oral addresses or what they are meant to achieve as he went on and on arguing that they indeed supplied 11,842 pink sheets to bolster their case, something that was needless at that point in time.

It immediately set the case apart. If you were watching on television or listening to the radio, one thing easily came to mind: that the oral address was more about separating the wheat from the chaff or the men from the boys. And the gregarious Philip Addison was certainly the chaff of the day or the boy on the hood as his arguments on all fronts were either disjointed or did not make any compelling sense.

I was hoping that Philip Addison was going to punch holes into the striking blow by the Electoral Commission that during the 47 days in court the petitioners were only able to detect one single discrepancy, whereby a presiding officer wrote 17 instead of 97, thereby showing a difference of 80 votes. I will not allow this to go without comment.

But Philip Addison, who perhaps was overwhelmed by the sterling performances of the three counsels representing the respondents, was too frightened and decided to talk on nonsensical issues which were nothing to write home about.

Addison also left unchallenged the allegation by the respondents that the NPP could not bring even one witness to testify that he/she witnessed the over stuffing of ballot boxes, the changing of figures to favour President Mahama or anybody who witnessed that some people were allowed to vote without being verified.

We simply saw Philip Addison on the sidelines instead of the goal line. He was simply not there or bluntly put, not prepared for the occasion. And I must say that millions of NPP supporters were simply disappointed as the so-called evidence by Dr Mahamadu Bawumia, the NPP star witness, were torn apart and in some instances belittled by the respondents while Philip Addison could not mount any spirited defence when he had his turn.

Philip Addison met his match in his former teacher, Mr Tsatsu Tsikata who proved to him that all good teachers have enough in their tanks to show their former and current students that they have been there before.

I never expected Philip Addison to wobble badly having had the privilege to listen to all the three respondents before having the final get go. I could see that Akufo-Addo was not impressed as his lawyer did not glitter one bit.