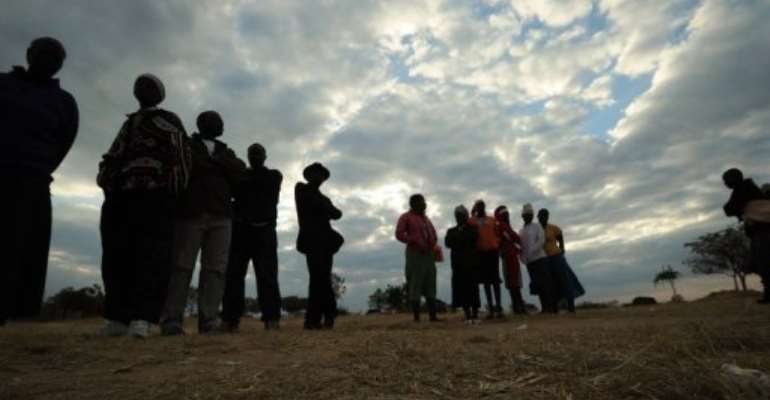 Zimbabweans prepare to cast their ballots at a polling station in Domboshava on July 31, 2013. By Alexander Joe (AFP/File)

The commission's statistics show the largest number of voters, 64,483, were turned away in the capital Harare.

Urban areas have long been a stronghold of Mugabe's rival Morgan Tsvangirai, who claimed the vote was rigged.

Regular voters were reportedly turned away because their names were missing from the voters' roll, they were registered in another ward or they did not have adequate identification.

But independent poll monitors have reported widespread manipulation of the roll and said the real number of disenfranchised voters could be much higher.

The Zimbabwe Election Support Network (ZESN) said over 750,000 urban voters were missing from the electoral list, in what they described as "a systematic effort to disenfranchise an estimated million voters."

Rights groups say police forced some people they believed to be opposition supporters to feign illiteracy and seek the assistance of police officers or polling officials, with their votes going to Mugabe.

Zimbabwe has the highest literacy rate in Africa.

The country's former finance minister, Simba Makoni who defected from Mugabe's ZANU-PF in 2008, joined those voices rejecting the outcome.

"We reject the results announced by ZEC as not free, not fair, not credible and not legitimate," said Makoni.

"These results do not reflect the expression of the free will of the people of Zimbabwe."

Makoni, the leader of the Mavambo Kusile Dawn party, had backed Tsvangirai in the elections.

He complained about the lack of availability of the voters' roll in time for the polls and the high number of ballot papers that were printed above the registered voters.

"Hundreds of thousands of potential voters failed to register and were therefore denied their right to vote. This point has a significant bearing on the outcome of the election," he said.