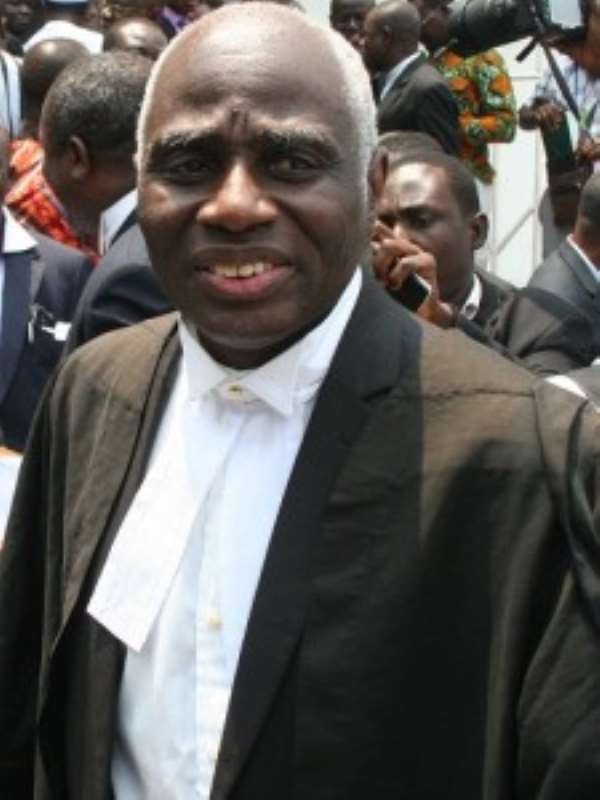 Parties in the election petition challenging the validity of the declaration of President John Mahama as winner of the December 2012 presidential election at the Supreme Court, have, in their respective capacities, elucidated their case and stance on which their case had been built.

In their oral address before the nine-member Supreme Court panel, presided over by Justice William Atuguba, yesterday, the parties maintained and emphasised their positions on the case, and further urged the court to uphold their various pleadings being sought.

The oral submissions made by lawyers in the case followed a written submission on the parties' view point on the issue before the court, which had since been filed at the Registry of the highest court of the land.

While the petitioners stressed that there were constitutional and statutory infractions that took place during the December 2012 presidential election, and that the said violations actually affected the declared result, the respondents, on the other hand, had debunked the claims of the petitioners, noting that the petitioners had failed in the quest to adduce evidence to warrant the court's acceptance of the assertions.

The 2012 presidential candidate of the New Patriotic Party (NPP), Nana Addo Dankwa Akufo-Addo, his running mate, Dr. Mahamudu Bawumia, and Party National Chairman Jake Otanka Obetsebi-Lamptey are in court challenging the declaration of John Mahama as winner in the 2012 presidential election by the Electoral Commission (EC).

The petitioners have sued John Mahama and the EC, but the National Democratic Congress (NDC), as a political party, on whose ticket John Mahama stood as presidential candidate, was later made a party to the case, after the court accepted its request to join the issue before it.

The petitioners are currently asking the court to annul over 4 million votes, representing votes cast in 10,119 polling stations across the country, for what they termed 'gross and widespread irregularities' recorded during the December 2012 poll, and further requested that Nana Akufo-Addo be declared the winner of the December 2012 presidential election.

However, the respondents led evidence in an effort to dismiss the claims of the petitioners, noting that there was no basis for the petitioners request to be granted, maintaining that the declaration of President Mahama as the winner of the polls was just as the elections were, generally free, fair and transparent.

In his oral submission before the court, Mr. Tony Lithur, lead counsel for President John Mahama, indicated to the court that the mal-functioning of the biometric verification device in the heat of voting, and subsequent instructions allowing registered voters to exercise their franchise.

He further catalogued how a member of the NPP went on air to praise the conduct of the election, claiming it had been peaceful, coupled with members and sympathisers of the party in jubilation indicating that they were winning.

Mr. Lithur, however, was surprised why the same party, which claimed they were winning the elections, could, in a press statement, alleged that his client and the NDC collaborated with the EC officials to falsify the election results.

According to him, the petitioners went collating results and made allegations of electoral violations 'on the face of the pink sheets', and sought to annul over 4 million votes, despite the failure of their polling agents in not raising any such infractions at the 26,002 polling stations nation-wide, as well as at collation centres in the constituencies across the nation.

The Counsel told the court that during the election, party agents were present at all polling stations, and the counting of ballots was done in the open, in the presence of party agents and with public participation.

He, therefore, noted that the petitioners, by their evidence adduced in court, had failed to discharge their burden of proof, since they could not make a case for the various irregularities that were alleged to have taken place during the 2012 presidential election.

In his opinion, decisions could not be taken just by looking on the face of the pink sheets to determine irregularities in the polls.

In his view, Mr. Tsatsu Tsikata, lead counsel for the NDC, argued that the petitioners were selective in their claim of alleged irregularities in the polls, adding that they had no 'supportable evidence and, therefore, their case had no legal standing.'

The Counsel further noted that based on the case adduced by petitioners so far, their analysis was 'poor in arithmetic, poor in logic, and deficient in statistics.'

Mr. Tsikata noted that the petitioners had not input any wrongdoing on the part of the voter as well as President Mahama.

According to him, the Constitution gives the right to votes, and does not allow retroactive penalisation, adding that evidence of 'you and I were not there' by Dr. Mahamudu Bawumia, show that he lacked personal knowledge on the electoral process, and for that matter, the court should not put weight on his evidence.

He also pointed out that the continuous change in the number of pink sheets by the petitioners in making their case of irregularities in the polls, could not be acceptable, adding that the petitioners had not been able to discharge their evidential burden.

The Counsel told the court that article 49 (2) of the 1992 Constitution does not invalidate votes cast by people who did nothing wrong, following the failure of the discharge of a public duty, noting that even though ballot accounting was important, it did not form part of the constitutional provisions, and could therefore, not lead to the annulment of votes.

However, Mr. Philip Addison, lead counsel for the petitioners, argued that the petitioners had been able to show a preponderance of evidence enough to affect the final result of the election, so declared by the EC.

The Counsel noted that the respondents knew the claims the petitioners were making, and yet had not made any case against those claims, claiming that no new pink sheet evidence had been added, and no new allegations made.

Mr. Addison noted that his clients could not bring evidence in support of over-voting, as claimed by the NDC, because voting was done in secret.

On the issue of voting without biometric verification, the Counsel pointed out that it was a mandatory provision that makes everybody to go through that process before voting.

Regarding the absence of presiding officers' signatures on pink sheets, the counsel was of the view that it was an entrenched provision in Article 49 of the Constitution, and could therefore, not be overlooked.

On duplicate serial numbers, Mr. Addison noted that it was facilitated by the printing of two sets of pink sheets, and a vehicle in perpetration the irregularities. He, therefore, asked the court to annul invalid votes and declare Nana Addo the winner of the December 2012 presidential election.

Meanwhile, the court has adjourned sitting to august 14, 2013, to enable the panel members address and seek clarifications on the issues raised by parties in the case, after which final judgment will be given on August 29.