Go To Court, Go To Court Or No Court, No Court—Part 1 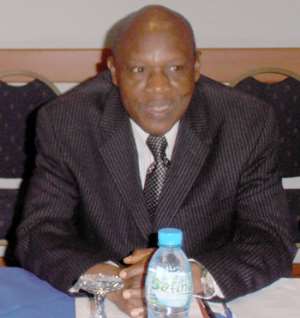 The two significant dates Tuesday, July 24 and Thursday, August 10, 2012, have come and gone but certainly, not without comments. These two dates have been recorded in the annals of Ghana history as probably the darkest moments of the Ghanaian.

The first, of course, was when the then Chief of Staff at the presidency, Henry Martey Newman, suddenly jumped on the airwaves and announced to all Ghanaians and the world that the third president of the 4th Republic, John Evans Atta Mills had passed on. Whether it was true or not, Ghanaians had to put up with his statement. But one pertinent thing that went amiss was whether he was the rightful person to have disclosed this vital information.

Where was he when the 'so called' doctors/ pathologists at the famous 37 Military Hospital declared him dead. How was he conveyed from the Osu Castle to the hospital? In an ambulance or was a passenger on a Ford/ Land Cruiser? The Castle has a clinic supposedly with a qualified doctor. And if so, why did he not accompany the president in his half strength condition to the hospital that was some 3 miles away?

Were the telephone lines at the Castle jn good order that a receptionist could have informed the hospital authorities of the conveyance of the president to them? Or as usual, the phone lines could not reach them. Did any officer/ official from the Castle not have any cell phone to contact the 37 Hospital ahead of time to alert them before their arrival? Where were Koku Anyidohu and the ADC at that time when the president was in dying mood? Was he left to his fate? And if so, why did they treat him like that? Where was the point of call at the hospital? Is it true that the vehicle that was used (reportedly told it was not an ambulance) to convey him first reported at the maternity ward precisely, the Yaa Asantewaa Ward - where every regular visitor to the hospital knows that it was a ward meant for only females. Further leads also showed that from the maternity area, the messengers who, probably had been debriefed to nail the president to death continued their tour of the hospital to the pediatrician ward where, again, the sick and fainted patient was obviously not a child. However, another source gathered by this author reveals that the pediatrician ward only caters for children from a day-old to 15 years and one really wonders whether those who trekked from the Castle to the hospital had been instructed to toy with him just to kill time and ensure that before they got to the correct ward, he would certainly be dead and could not be revived by any specialist doctor there. However, the most pathetic and ironic statement to come from Mr. Mills's biological brother, Cadman Mills was that the doctors at this prestigious hospital had come out with an autopsy report that his brother had died as a result of 'massive stroke' - a situation that, till now, cannot hold water. After being resettled at the Castle by his brother president (job for the boys) for no special work done for Ghana and earning/fetching for himself some Gh₵6,000. 00/month excluding the other fringe benefits and the juicy perks, could look up to the skies and support the pathologists to pronounce his own brother dead of massive stroke. Have readers realized how MONEY can influence shallow minds to do evil at the expense of truth? Well, wonders, they say, will never end in Ghana and can perpetually not end in this country supposed inarguably to be the centre of the world.

MILLENNIUM FUNERAL/BURIAL
This article is not meant to impugn the integrity of the funeral committee members but Ghanaians and the world at large could be the best judges. The pomp and pageantry associated with the celebration is indescribable. The expenditure incurred from day one to date by the committee undoubtedly with 101% support from government is yet to be made public. When many Ghanaians yearned for the correct thing to be done in connection with the unprecedented funeral/burial; we were asked to hold onto our horses and everything will be made public. One year has passed on. The anniversary celebration that was spanned for a week starting from Wednesday, July 24 through to July 31, 2013, has also come and gone. Today, Wednesday, August 7, nothing has been heard from the septuagenarian Kofi Totobi Quakyi and his bunch of committee members. Why the silence and feet dragging? The people must know their accounts and debts if any. They should however, not throw dust into our eyes that there were this and that benefactors or hundreds of benevolent and corporate bodies, for the love of Ghana, and not knowing what to do with their money and resources could just get up and dish out monies for the funeral/burial of our president whose demise, even smacks of some treachery and smells of rat.

TRADITIONAL
Back home in our traditional set up in Ghana, most funerals have been held on Saturdays and Sundays for memorial and thanksgiving at the various church houses. Except on a few occasions, that they are held on Thursdays and Sundays by some section of the society. Thereafter, when the funerals are held on Saturdays, immediately to be followed with church service the next day, obviously, the Monday following is used for family gathering to thrash out any debts incurred and to pay off some creditors for drinks, chairs, canopies, bandsmen, funeral undertakers and caterers if any; in case the food served at the funeral grounds was not prepared by the family members themselves but by different persons. Since the anniversary celebration finished on Wednesday 31st and there has been more than a week's grace, one would have thought that the public would have been told now of the expenditure incurred and to know the percentage of this 'gargantuan' debt that would be apportioned to them for absorption in the form of fuel and the other utility bills. As for Ghanaians, 'ehuru koraa a, ebedwo' to wit, no matter how abnormal certain harsh government decision have been unleashed to further worsen the plight of the Ghanaian, as characteristic of the Ghanaian, we would only talk, moan, and continue to talk, talk, talk; once, the government has arrogated pride unto herself and decided to stiffen the neck to rope in its desired revenue, there would be no turning back to budge the hue and cry of the suffering masses. Now the people are ready for the bitter pill to be forced down their throat so the earlier the Totobi Quakyi committee comes out with the balance sheet or the trial balance for the auditors to peruse the better it would be for him. There is not enough room for him now to toy with the life of the average Ghanaian.

TRUISM
Seasoned economists say Ghana's total debt now stands at Gh₵39.1bn. Of this fantastic and gargantuan but unprecedented figure, a whopping Gh¢32bn stands in the name of the Mills-Mahama-Amissah Arthur for the period January 7, 2009 to June 30, 2013 i.e. a period of 66 months. This is suicidal. This is incredible. This is unbelievable. This is unprintable.

Personally, the author's only monumental landmarks that could ever pass for a government to government competition on TV3 Mentor since Nkrumah's days are the magnificent twin edifices at the Kotoka Airport junction that house the Ministry of Foreign Affairs and the 10-kilometer stretch of road from the La 'T' Junction from the International Trade Fair area towards the Liberation Road at the 37 Military Hospital crossroads. All the others the government touts for having done are just rhetoric, propaganda and populist gimmicks.