Egypt poised to move on protesters as mediation fails 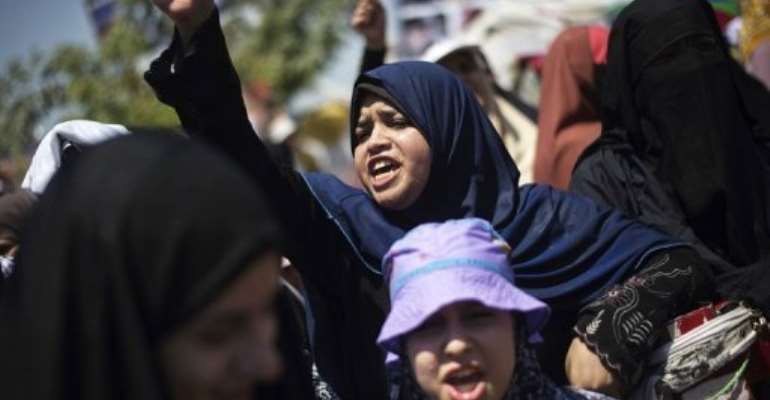 Supporters of Mohammed Morsi take part in a sit-in outside Cairo's Rabaa al-Adawiya mosque on August 7, 2013. By Gianluigi Guercia (AFP)

"The cabinet affirms that the decision to disperse the Rabaa Adawiya and Nahda sit-ins is a final decision, on which all agree, and there is no going back on it," prime minister Hazem al-Beblawi said on state television.

Protesters have been camped out in two Cairo squares and insist they will stay until the Muslim Brotherhood's Morsi is reinstated as president.

"We call on them now, anew, to quickly leave, and return to their homes and work, without being chased if their hands have not been soiled by blood," Beblawi said.

"The government's solicitude for the holy month of Ramadan ... in which it hoped the crisis would be resolved without the intervention of security, did not mean the cabinet had gone back on its decision," he said, just hours before the end of the Muslim fasting month.

The presidency announced earlier on Wednesday that Western and Arab efforts to mediate an end to Egypt's political deadlock had failed.

Its statement came hours after US Deputy Secretary of State William Burns left Cairo, having made no headway in finding a compromise between the army-installed government and Morsi's supporters.

"The phase of diplomatic efforts has ended today," the presidency said, referring to mediation by Burns and EU envoy Bernardino Leon, who were among other diplomats who had travelled to Cairo.

"These efforts have not achieved the hoped for results."

The presidency said it "holds the Muslim Brotherhood completely responsible for the failure of these efforts, and for consequent events and developments relating to violations of the law and endangering public safety."

More than 250 people have been killed in clashes since Morsi's ouster by the military on July 3, following days of mass rallies demanding the president's resignation.

The government had already ordered police to end the sit-ins and protests, which it described as a "national security threat," but held off amid intense diplomatic efforts to find a peaceful resolution.

An airport official said Burns, in Cairo since Friday, left on Tuesday night after days of talks with the interim rulers and the Muslim Brotherhood.

Adding his weight to the drive for a peaceful resolution to the crisis, United Nations chief Ban Ki-moon urged the release of Morsi, who has been formally remanded in custody in an undisclosed location.

The government, which has faced intense domestic pressure to crack down on Morsi's supporters, lashed out on Tuesday against what it called excessive international pressure.

His statement came as US senators John McCain and Lindsey Graham outraged the government's supporters by describing Morsi's removal as a "coup."

"The people who are in charge were not elected, and the people who were elected are now in jail," Graham said.

The comments drew a harsh rebuke from the presidency, which described the comments as "clumsy."

Graham and McCain were later asked by CBS News if they were alarmed by what is happening in Egypt.

"Oh my God," Graham responded. "I didn't know it was this bad. These people are just days or weeks away from all-out bloodshed."

Western envoys had pressured the Brotherhood to end its sit-ins, according to Islamists who attended the talks. They also demanded that the government release jailed Islamist leaders as a confidence-building measure.

Morsi himself is being held on suspicion of having collaborated with Palestinian militants to kill policemen and stage jail breaks during an early 2011 uprising against strongman Hosni Mubarak, while Morsi was in prison.

The Brotherhood's supreme guide, Mohamed Badie, and his deputies are to stand trial later this month on charges of inciting the shootings of protesters outside their headquarters on June 30.

The government says it is up to the judiciary to release prisoners. The Islamists say their release is a precondition for further talks on finding a settlement, which could include symbolically reinstating Morsi, who would then call for early elections.

Authorities have promised demonstrators a safe exit and said an end to their protests would allow the Brotherhood's return to political life.

Police say they have finished preparations for breaking up the sit-ins, where thousands are camped out in tents.

More than 80 protesters were killed in clashes with police at the main sit-in outside Cairo's Rabaa al-Adawiya mosque on June 27. Over 50 people died in earlier clashes with soldiers outside elite army headquarters.

Meanwhile, Egypt's military said it had killed 60 "terrorists" in Sinai in the month since Morsi's ouster, which has fuelled militant attacks in the restive peninsula.