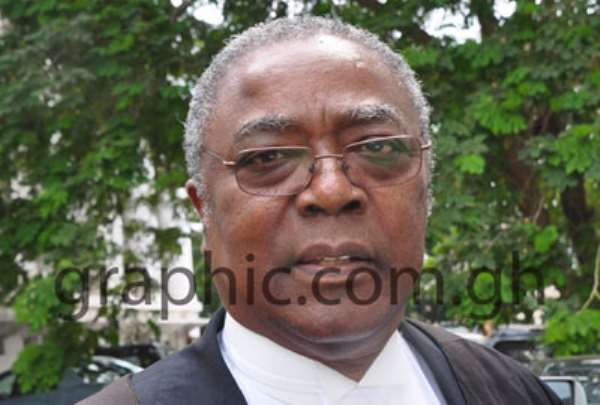 Lead Counsel for the Electoral Commission, Mr James Quashie-Idun has in his oral submission to the Supreme Court, said the petitioners are fasting onto errors committed in the completion of pink sheets by presiding officers that do not benefit any particular candidate or affect the number of votes validly cast at polling stations.


He said the ballots were counted openly, attested to by the agents and signed on openly, 'as we say in Ghana, fiilifiili.'

He said out of the 26,002 polling stations, the petitioners were able to provide only one example of a discrepancy between the votes as counted at the collation centre and the polling station and it involved 80 votes.

This, he said has been admitted by the Electoral Commission and that the 80 votes did not affect the overall results and that instead of 97 votes, the person wrote 17.

Addressing the nine-member panel on Wednesday about why he thought the court should disregard the petition challenging the declaration of President Mahama as winner, Mr Quashie-Idun maintained that the performance of the EC was an 'excellent record which the court should take into account'.

"The petitioners have failed to put their case before your lordships and that not one single vote ought to be annulled because they have not justified the annulment," he said.

Quoting from the proceedings on May 7, 2013 on the evidence of Dr Bawumia under cross examination, Mr Quashie-Idun said the witness told the court that the NPP on December 8, 2013 thought they were winning the elections based on the assessments of their agents but failed to tell the court what changed afterwards.

Counsel maintained that there were verifications and cross checking of results at the collation centre after a similar exercise had been done at the polling station, and also at the strong room of the Electoral Commission where representatives of the contestants were present.

He suggested the court take due account of the evidence of Dr Afari Gyan about the importance of the count of the ballot in public as one of the pillars of transparency on the electoral system and urged the judges to look skeptically at the attempts to undermine the results of that process through alleged or perceived or actual errors in the completion of the first part of statement of poll (pink sheets) which does not affect the results.

Again quoting from the July 16, 2013 evidence of Dr Afari Gyan under cross examination by Mr Addison where the witness talked about some recommendations on elections to Nigeria, counsel said the viability of Ghana's electoral system has not been questioned in any way by the evidence led before the court.

On the question of the electoral register, Mr Quashie-Idun said on July 30,2013 when all parties in the petition filed their written addresses, it was in the news that in a far away (Zimbabwe) country on the African continent, the electoral register had been released on that day and the elections was taking place a day after.

'So when Afari Gyan says we have a tried and tested system, I will submit to your lordships that this has been clearly established in the evidence led in the court.'

On the six categories put forward by the petitioners, he said they have not established the causal link between those allegations and that even if they were established and the results as declared as by the EC, there was no causal link.

Touching on the incident at Dome Kwabenya, Mr Quashie-Idun said it was admitted under cross examination by Dr Bawumia that it was a simple question of addition by way of adding the votes in that constituency, and it had to be done nine times and everybody agreed afterwards and that it was not a case of ballot stuffing.

'Why did it not happen in any of the other polling stations?'

He said the vigilance of the observers is what resulted there and therefore submitted that it would have happened if the need had arisen in the other 26,002 polling stations.

Police made me stand in the sun for 5hrs for not wearing fac...
40 minutes ago