Give Me My DCE, Mr. President 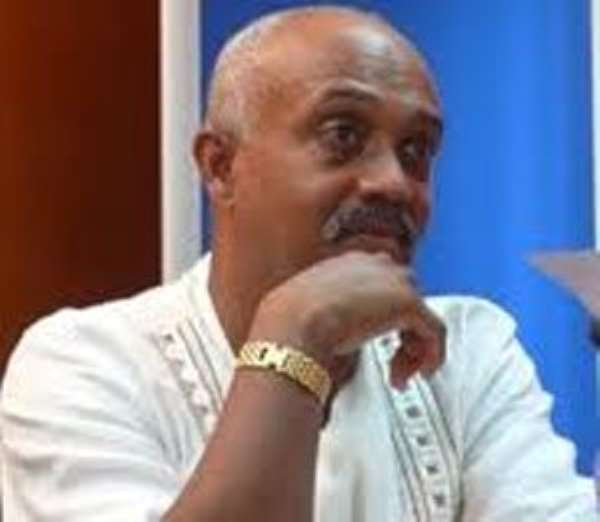 But Mr. Kwetey says investors are pleased with Ghana's financial indicators and management.  Actually, if they looked at financial management they would brave Boko Haram in Nigeria.  Fortunately some other stuff makes them keep an open door to us.  They can see good democratic evolution and a far better return on their money than elsewhere in the world.  This country runs not on the fuel of cash and prudent borrowing, but on the peace of the Ghanaian, the very symbol in the Supreme Court which Mr. Kwetey condemns as a waste of time.  And if he is to be used as an example, he is not of that Ghanaian ilk, sporting one of the foremost fetid mouths in politics.  Outsiders see what we are doing, but savvy Ghanaians are fully on top of what is going down here.  We just can't find redress to coral Government appointees.

I am challenging Fiifi Kwetey to order LESDEP National Coordinator Adam Gariba to publish details of the various programmes under the Local Enterprise Skills Development Programme (LESDEP) and tell Ghana how much money went into Ketu South under this programme.  If you think GYEEDA has a mess, wait till we open the lid of LESDEP.  Last announcement, they were expanding to Niger.  Yes, Niger.  But click here to go to their website http://www.lesdepgh.org/pages.php?linkID=30&lesdep=Programme%20Areas and see the similarity to GYEEDA.  Don't be surprised when you see ICT, Mobile phone/Laptop repairs and oh, surprise, surprise transport and sanitation.

When we are done with GYEEDA, if the President ever finds the courage to release the report, fair-minded Ghanaians will be traumatized .  With PV Obeng heading the GYEEDA-spin, a job he is most qualified for; he dragged JJ out of many an impossible situation before he was walked out of the limelight by the Chronicle's findings and JJ's own embarrassment, JDM's clever side-swipe might hold out for a bit.  But the GYEEDA report has now gone viral and copies are available everywhere http://newsaudio.myjoyonline.com/pages/newsaudio/201308/467.php if you know who to ask and where to look. http://www.modernghana.com/news/479459/1/the-gyeeda-report-for-the-busy-citiz.html

And while we are on protracted cases, what has happened to the policemen who assaulted the Rattan Cane Artisans near Switchback Road?  We were promised a swift investigation and punishment for the brutality we all saw on TV.  How come it has gone quiet?  Mr. IGP, is this how your corruption spins.  Let's please deal with it.

Tuesday 30 th July 5.30pm and Tsatsu Tsikata, counsel for NDC Respondents to the Election Petition, arrogantly chose not to file their address as ordered by the Bench.  His flippant excuse that they wanted to make life easy for the Judge http://politics.myjoyonline.com/pages/news/201308/110700.php s by binding the appendices, was condescending and provocative, pushing Mr. Addison of the NPP to label it communist inferior tactics and a way to read the petitioners address and modify theirs to match.

Throughout this hearing, I think Tsatsu in particular pushed the limit and I saw another attempt to create a legal contusion, divert the case and maybe mire further controversy.  I am still waiting to hear why he thought he would make a major case with the pink sheet count, which KPMG successfully mucked up.  But I thought the Judges were smarter, choosing to slip-side his provocation and 'solomon' their decision.  I think what Tsatsu wanted, was his address to be disallowed and I could see his motion ready to be filed.  Maybe team Addison also saw this and made the point, re CIT and let it go.  At this stage the oral addresses are due day after Ramadan.  August to be the month?

So the University Teachers Association Ghana took some domedo http://www.ghanabusinessnews.com/2013/08/03/utag-continues-strike-set-to-meet-nlc-national-security-boss/ from the Government's $1billion Euro bond success, made a strike call and forced President Mahama to come out with his smaller apologising gourd.  Not as successful as when he dragged Mayor Oko Vanderpuye by the beard with the giant size calabash to apologise on his behalf to Theodosia Okoh.  Why is he doing this?  I remember when he came to apologise during the great La Paz-Odorkor-Mallam-McCarthy Hill traffic wedge.  It was then two weeks to completion and the contractor was dead on course.  He did it just to look nice guy?

Oko Vanderpuye is still the Mayor, despite all his incompetence and the only reason has to be that he is a great conduit for party funding.  He is not a pleasant person, so it leaves me musing.  I liked Akosua's cartoon in the Daily Guide, Oko hockey-whacked http://www.dailyguideghana.com/?p=90620 to the field by JDM, onward to appease Theodosia.  Why not just sack the man?  Surely the NDC can find another candidate?  Or not?

Now, the NDC youth and their youth leaders accept not the Constitution of this country, especially Local Government laws on how DCEs are made lords almighty in their districts.  In the North, Volta, Western and Central Regions, they rampaged and burnt Government property on the frivolity http://politics.myjoyonline.com/pages/news/201308/110714.php that they anticipated nomination of persons they did not approve.  We can't blame them; this is a thing of history.  Kwame Nkrumah set this off when he rewarded District Commissioners and Chiefs who were prepared to do his bidding in exchange for, in the case of the DCE's, full control over district party resources and commanding positions in the CPP inner chamber.  With the chiefs, he positively overturned traditional authority in order to break the rule of the Asante King and brought traditional inheritance into the law, gazetting authority to those prepared to rebel against Ashanti.

Today, the Nkwankwa (young men then, foot soldiers in today's politics) now think they should own their DCE.  Here is the expectation that an NDC Government must appoint a DCE with NDC fervor and grassroots-beneficiates to ensure perpetuity of their status.

For so long we have had this debate whether DCE's should be appointed or elected and for so long after the Constitution Review Commission submitted its report, we are yet to implement the will of the people.  Forget we spent significant money, went round the whole country, leave out the fact that Government has decided which parts of the report it will or will not accept; there are no good parts we can use? Or get on with and discuss or leave out what is not agreed?  Meanwhile we are still paying staff, waiting for the contents to suit elements.  Isn't this blatant resource waste?

NDC foot soldiers are baying for blood.  The police should practice how to control them in case they try something stupid later this month.

And Anita De Soso made my week .  She will celebrate if the NDC wins the petition hearing.  You go girl, I am on your side.  I don't get what all this caution is about.  We are being held to ransom by some phantom foot soldiers we fear so much that we cannot express our humanity in case they are offended and run riot.  If they do, arrest them.  Ghana will not burn or go into some kind of street running battles between NPP and NDC hooligans and if they do, that is why we have spent money to equip the police with anti-riot gear.    This is the same reason we neither collect sufficient taxes nor arrest mob lynches because we fear they will run amok.  Anita, I will celebrate a victory with you, mine to landmark the democracy we have achieved.  It is appropriate that someone enjoy the fruits from a fight.  A sweet conquest is as important as a call for Mensah Otabil to be arrested for fuelling doomsday scenarios http://newsaudio.myjoyonline.com/pages/newsaudio/201308/467.php , encouraging every pastor worth a congregation, calling for all night vigil and fasting, making calabash offertory demands on penniless and gullible followers to maybe believe that we can avert what has made Otabil's heart heavy.  Still can't fathom this religious arrogance. http://www.modernghana.com/news/476348/1/mensa-otabil-and-duncan-williams-must-be-arrested-.html

We need a football tournament, which we should win, cheer us up.  It is the economy, stupid.

Inside Politics: Political Quotes
Catch up with all the political quotes from our politicians.
Sponsored
More Opinion
Modern Ghana Links
Napo: Medical Doctor Who Made History As Education Minister
The President knows too well those who can help the party and government to succeed
Why Is Carlos Ahenkorah The Target?
No finance minister has served two terms in the Fourth Republic of Ghana: Would Ken Ofori Atta break the jinx?
Edward Gordon, UCC SRC Presidential Candidate writes: Partnering Nduom School of Business is a progressive move—UCC management deserves commendation
The Sources Of Funds Of Elected Politicians: The Shroud Of Democracy
After Buganda Showing Yellow Card to NRM; What Next?
2020 Samampiid, A Viewpoint Of An Indigene.
Nana Akufo-Addo, A Man Of Vision & Perseverance; He Must Be Studied In Our Schools
Election Reports Quotes Dossiers
TOP STORIES