Much Ado About Court Verdict 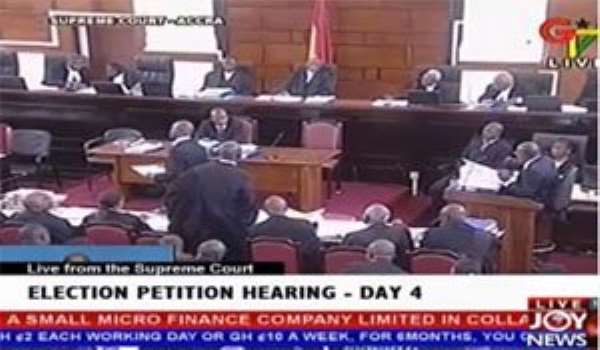 The noise about a lurking post-Supreme Court verdict violence is approaching deafening decibel. No day passes without one group or the other obtaining space on the pages of newspapers and air time on radio to sermonize about what could befall the country in the aftermath of the Supreme Court verdict.

Much as we appreciate the need for all Ghanaians to accept the verdict of the Supreme Court and avoid breaches of the law, we have detected a certain ploy by some grouping to use the issue for their selfish ends.

Those who have undertaken the so-called peace mission are exaggerating the issue, we are afraid. This country has not got a violent pedigree except for some political activists whose stock-in-trade is already at play.

We recall how the late President John Evans Atta Mills assumed the title of Prince of Peace as though he inherited a Ghana at war. The country has never been more peaceful, at the time the departed president assumed the reins of power; yet we all saw the impression being touted about when he was at the helm.

It is our position that those who are likely to disturb the peace are those who have a track record for such conduct.

Cars have been torched and other government properties destroyed by irate party supporters incensed because the President did not appoint their choices for the positions of DCEs and MCEs.

Others have stayed put in bungalows over which the Supreme Court has ruled that they vacate. Is it challenging therefore to determine those who could rock the boat?

We have heard the treasonable remarks on radio by some political commentators who dangle their membership cards of the ruling party as if these set them above the law.

Yesterday the voice of one of such persons was played back and what emanated from his mouth speaks volumes about where trouble could come from when the Supreme Court delivers its landmark verdict.

The attempt by such persons to set the country alight is an issue which should be tackled by those who are engaged in superfluous efforts at campaigning against post-verdict chaos.

The energy being exerted by the peace campaigners could best have been channelled towards reigning in the loud-mouthed sabre-rattling political commentators.

The remarks that the Supreme Court verdict, should it order the stepping down of the President, would be resisted, is a recipe for chaos—a contemptuous rhetoric which challenges the foundation of our existence as a corporate nation.

Ghana shall survive it all when we stop the hypocrisy and respect our institutions which the majority of us are ready to do.