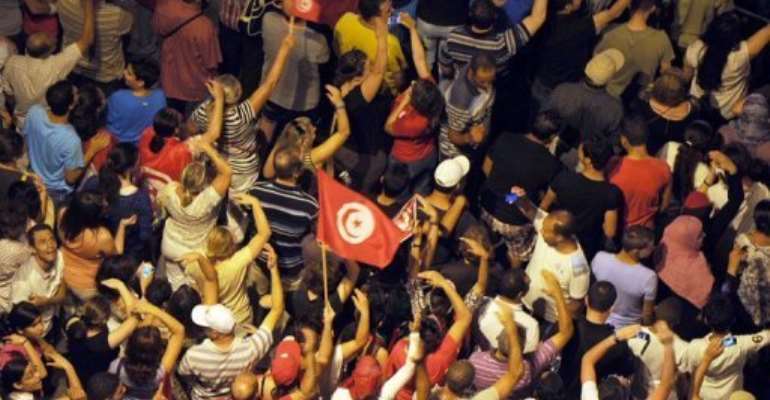 Tunisian protesters gather in front of the Constituent Assembly headquarters in Tunis on August 4, 2013. By Fethi Belaid (AFP/File)

TUNIS (AFP) - Tunisia's political crisis deepened Tuesday as the elected National Constituent Assembly suspended its work until the government and opposition open negotiations on a showdown sparked by an opposition figure's assassination.

The latest twist came as hundreds of demonstrators started to gather outside the assembly building for a mass rally called by the opposition aimed at pressuring the government to step down.

"I assume my responsibility as president of the ANC (assembly) and suspend its work until the start of a dialogue, in the service of Tunisia," its speaker Mustapha Ben Jaafar announced on state television, meeting a key demand of the protesters.

The secular ally of the governing coalition led by the moderate Islamic movement Ennahda was referring to the crisis sparked by the July 25 murder of Mohamed Brahmi that has already prompted many opposition members to boycott the ANC.

The opposition refuses to hold talks with the government unless it steps down while Ennahda rules out any dialogue conditional on its ouster.

In the face of terror threats facing Tunisia, Ben Jaafar condemned the failure of the political leadership to strike a compromise.

"Despite the gravity of the situation and instead of working towards unity, unfortunately party leaders have gone in the opposite direction, towards division, by mobilising" street protests, he said.

Since the ANC was elected in October 2001, political leaders have failed to find a consensus on a new constitution following that year's revolution which ousted longtime president Zine El Abidine Ben Ali.

The suspension of the assembly's work puts into question Prime Minister Ali Larayedh's targets of the ANC adopting a new constitution and electoral law by October 23 to allow for a December 17 election.

Ennahda chief Rached Ghannouchi, quoted in La Presse newspaper on Tuesday, said the government will not step down under pressure from the street, while Larayedh charged that demonstrators were hampering efforts by security forces to root out gunmen linked to Al-Qaeda.

"There are excessive demands at protests for the dissolution of the elected government," Ghannouchi told La Presse. "In democratic regimes, protests don't change governments; it's under dictatorial regimes that a demonstration is able to topple a regime."

A mixed bag of opposition parties, ranging from extreme left to centre-right, called for the protest in Tunis due to start at 2000 GMT to mark six months since another opposition politician, Chokri Belaid, was gunned down outside his home.

Government detractors say the Ennahda-led cabinet has failed to rein in radical Islamists blamed for both Belaid's murder and the gunning down of MP Brahmi.

Tunisia has been rocked by anti-government protests since the MP's killing, and protesters have clashed with police, who have used tear gas to disperse them.

The NCA earlier the same day gathered to discuss the "terrorist crisis" as security forces pressed on with a vast operation to hunt down militants holed up in the rugged Mount Chaambi region near the Algerian border.

Speaking to the assembly, the premier had harsh words for demonstrators, saying their activities meant security forces "are obliged to be in the streets when they should be participating in the battle against terrorism."

Defence Minister Rachid Sabbagh told the NCA that the armies of Tunisia and Algeria would "reinforce their cooperation, particularly to arrest the Chaambi terrorists."

Algerian Foreign Minister Mourad Medelci, meanwhile, told a joint news conference in Algiers with his Tunisian counterpart Othmane Jarandi that any direct military intervention in its neighour was a "red line."

"There are red lines that can not be considered," he said, while acknowledging that "operational measures (in security cooperation) are being adapted to suit the nature and scale of the risk which has emerged."

Back in Tunis, Interior Minister Lotfi Ben Jeddou said around 40 people suspected of belonging to the group had been arrested since December and that another 58 were being sought.

The military has been hunting the militants since then, and stepped up its offensive after eight soldiers were killed in a July 29 ambush.

Ghannouchi also dismissed critics who say authorities are being soft on radical Islamists, who have grown in influence since the popular uprising that toppled Ben Ali two years ago. "There are 500 to 600 terrorist suspects imprisoned in jails," he said.

Larayedh has also ruled out the government's resignation, offering instead to broaden the coalition.