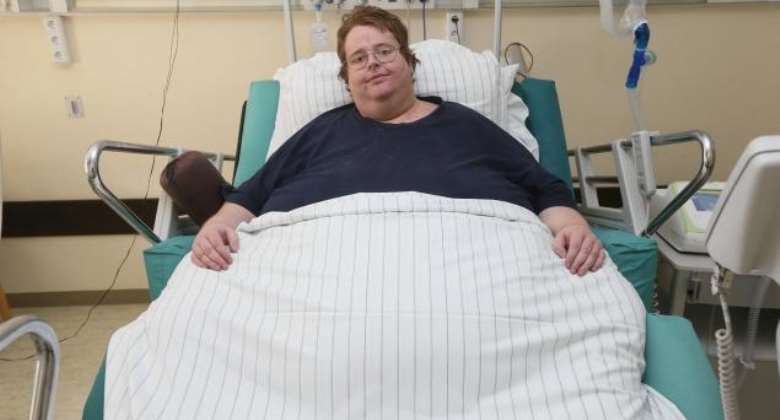 Michael Lehberger, 29, of Rigelsberg, Germany fell sick and could not fit through his bedroom doorway, so emergency workers had to break through an outside wall and use a front-end loader to lift him out and take him to the hospital.


Emergency rescue crews smashed a huge hole in an obese man's house so they could lift him to safety with construction equipment.

Junk food addict Michael Lehberger, 29, of Rigelsberg, Germany called for help shortly after midnight on July 26 because of abdominal pain.

In reality, his heart was failing.
The nearly 900-pound man could not fit through the bedroom door so firefighters were forced to bust down a first-floor wall, reported British newspaper The Sun.

"We have not seen him for at least two years," a neighbor said.

But Lehberger lacked the dexterity to walk out of the newly-created gaping hole in the home. Emergency workers turned to a front-end loader, a heavy-duty construction vehicle, to save him.

"I have never experienced such a situation. He weighed a little over 400 kilograms (880 pounds) — and our hoist is only licensed to carry up to 270 kilograms (595 pounds)," said Volker Klein, head of the operation.

Three responders climbed into the cushioned scoop bucket with Lehberger to hold him steady so he would not tumble to the ground.

Once outside the home, Lehberger was loaded into an ambulance designed for four patients and driven to the Evangelical Hospital (Evangelischen Krankenhaus) in ZweibrÃ¼cken, a city about 28 miles from his home.