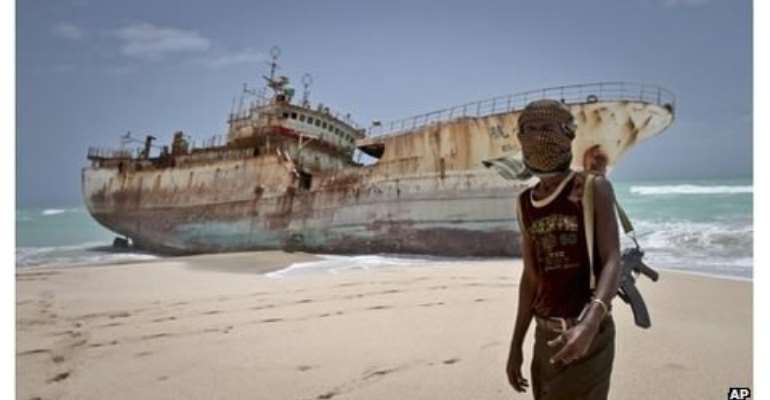 The recognition of piracy by West African societies as an acceptable economic activity that transforms lives has been identified by security experts as one of the challenges hindering the fight against the activities of pirates.

Dr Kwesi Aning, Director, Faculty of Academic Affairs and Research at the Kofi Annan International Peacekeeping Training Centre (KAIPTC) in Accra, says the legal framework to control the activities of pirates are also "not up to speed".

Speaking on Joy FM's Super Morning Show Tuesday, Dr Aning said the threat of pirate activities in Ghana's territorial waters is "real, it's growing and it will continue to grow".

He indicated that piracy is purely a business venture with businessmen from countries including Ghana financing it.

He said because people were not seeing the criminal aspect of piracy, which he described as armed robbery at sea, the threat was put on a back burner until Nigeria and Benin started feeling the impact of pirate attacks.

According to him, since 2012 piracy attacks at the Gulf of Guinea have become more frequent than that at the Gulf of Aden. The only operational difference, he noted, was that while pirates operating on the coast of Sudan (Gulf of Aden) seize vessels with their crew and demand ransom for their release, in the case of West Coast, the pirates siphon oil, steal goods aboard vessels, and take charge of sophisticated communication gadgets, which he said is "more threatening".

Dr Aning said that navies in the sub region are not able to track the pirate activities because the pirates use more modern and faster outboard motors.

Admitting that armed robbery at sea cannot be fought by one country, the security expert charged governments to provide their navies with the necessary financial support and tools such as surveillance aircraft and faster boats. Otherwise "we will be laughing at the wrong side of our mouth soon", he warned.

He said the economic cost of piracy in West Africa is estimated at two billion US dollars a year.