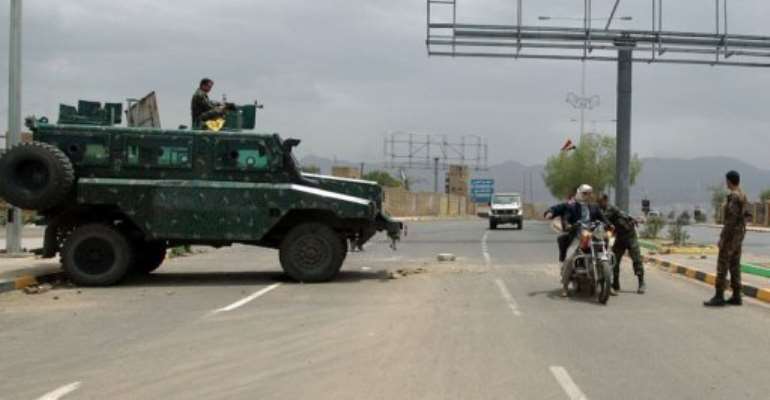 Yemeni soldiers search a motorbike at a checkpoint on a street leading to the US embassy in Sanaa on August 4, 2013. By Mohammed Huwais (AFP)

WASHINGTON (AFP) - US missions across the Middle East and Africa will be closed until at least Saturday for fear that Al-Qaeda will launch an attack to mark the end of Ramadan.

The State Department, acting "out of an abundance of caution," said 19 diplomatic outposts would remain shut.

Several US allies, including Britain, France, Germany and Norway also announced closures of some of their missions in the region.

Ramadan, the Muslim holy month of fasting and prayer, is due to come to an end at the weekend with the Eid al-Fitr festival.

On Saturday, the global police agency Interpol stoked fears by issuing a security alert over hundreds of militants freed in jail breaks.

The US closure list includes 15 embassies or consulates that were shut on Sunday -- the fifteenth anniversary of Al-Qaeda's attacks on US embassies in East Africa -- as well as four additional posts.

Around 25 US missions had initially been ordered closed.

US lawmakers said the move was prompted by electronic intercepts of high-ranking Al-Qaeda operatives signaling a major attack.

Michael McCaul, chairman of the House Homeland Security Committee dubbed the intelligence "probably one of the most specific and credible threats I've seen, perhaps, since 9/11."

Saxby Chambliss, vice chairman of the Senate Intelligence Committee, said that the level of chatter among alleged terrorists was "very reminiscent of what we saw pre-9/11."

The NSA programs have come under intense scrutiny since former intelligence analyst Edward Snowden leaked information to the press about the scope of the surveillance.

"If we did not have these programs then we simply wouldn't be able to listen in on the bad guys," said Chambliss.

General Martin Dempsey, chairman of the US Joint Chiefs of Staff, told ABC News the threats were "more specific" than previous threats, although the exact target was unknown.

ABC News cited an unnamed US official as saying there was concern Al-Qaeda might deploy suicide attackers with surgically implanted bombs to evade security.

New closures were announced in Madagascar, Burundi, Rwanda and Mauritius. The outposts that are reopening include those in Afghanistan, Algeria, Bangladesh, Mauritania, Iraq and Israel.

Soldiers with armored personnel carriers were stationed outside the buildings as police and army checkpoints went up on all the city's main thoroughfares.

Residents said they heard the sound of a drone overhead, which could only be American as Washington is the sole power to operate the unmanned aircraft in the region.

The United States considers Al-Qaeda in the Arabian Peninsula to be the jihadist network's most active and dangerous branch, and is intensifying a drone war against militants in Yemen.

"I've spent 21 years in the CIA, and I don't think I've ever seen 22 embassies closed simultaneously. This is very, very unusual," Robert Baer, a former CIA officer in the Middle East, told CNN.

Baer said the US action comes amid an Al-Qaeda resurgence, including recent prison breaks in Libya and Iraq and turmoil in Egypt, Mali and elsewhere in the region.