Mideast missions in lockdown as US eyes Qaeda threat 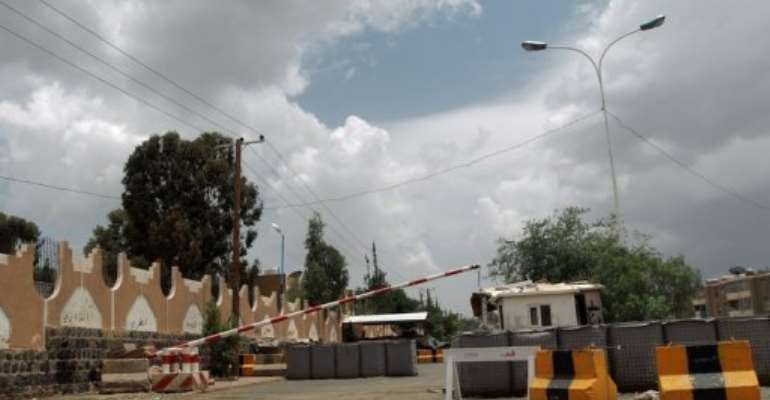 A checkpoint leading to the US embassy compound in the Yemeni capital Saana is seen on August 3, 2013. By Mohammed Huwais (AFP)

SANAA (AFP) - Security was tight at US missions around the Arab world Sunday as Washington held urgent talks on an Al-Qaeda threat that prompted it to close two dozen embassies and consulates.

Measures were particularly strict in Yemen's capital, where Britain, France and Germany also closed their embassies following a US warning which lawmakers in Washington said involved Al-Qaeda's joint Yemeni and Saudi branch.

But the US alert spread across most Arab capitals and extended further afield to Afghanistan, Bangladesh and Israel, with embassies and other diplomatic missions closed on Sunday, the first day of the working week in many Islamic countries.

In Sanaa, special forces with armoured personnel carriers were stationed outside the US embassy and the missions of Britain, France and Germany, an AFP correspondent reported.

Police and army checkpoints were set up on all the Yemeni capital's main throughfares.

Residents said they heard the sound of a drone flying over, which could only be American as Washington is the sole power to operate the unmanned aircraft in the region.

Washington considers Al-Qaeda in the Arabian Peninsula to be the jihadist network's most active and dangerous branch, and has waged an intensifying drone war against the group's militants in Yemen.

In Jordan, authorities beefed up security around the closed US mission.

"Authorities have conducted a sweep for explosives at all US diplomatic locations and beefed up security measures around the US embassy," a Jordanian security official told AFP.

US National Security Adviser Susan Rice chaired White House talks to review Washington's response to the threat it revealed on Friday of a major attack by Al-Qaeda during the month of August in the Middle East or North Africa.

President Barack Obama did not attend but was briefed afterwards.

Early last week, "the president instructed his national security team to take all appropriate steps to protect the American people in light of a potential threat occurring in or emanating from the Arabian Peninsula," a White House statement said.

Although the United States has responded to terrorist threats before by closing diplomatic missions, this was believed to be the most widespread closure ever, covering at least 25 embassies and consulates across the Muslim world and nearby nations.

"I've spent 21 years in the CIA, and I don't think I've ever seen 22 embassies closed simultaneously. This is very, very unusual," Robert Baer, a former US case officer in the Middle East, told CNN.

Baer said the US action comes amid a resurgence of Al-Qaeda, including recent prison breaks in Libya and Iraq in which hundreds of inmates have escaped, and turmoil in Egypt, Mali and elsewhere in the region.

"Just in general, they need to put themselves back on the map and make a big splash at this point," he said of Al-Qaeda. "It's a very, very lethal organisation still and could hit us just about anywhere."

The White House talks were held as Interpol issued a global security alert after hundreds of militants were set free in jailbreaks linked to Al-Qaeda.

The worldwide police agency said it suspected Al-Qaeda was involved in jailbreaks across nine countries, notably Iraq, Libya and Pakistan, that had "led to the escape of hundreds of terrorists and other criminals" in the past month alone.

Interpol noted that this week marks the 15th anniversary of Al-Qaeda's bombing of the US embassies in Nairobi and Dar es Salaam that killed more than 200 people and wounded thousands.

General Martin Dempsey, chairman of the Joint Chiefs of Staff, told ABC News that the threats were directed at Western interests, and were "more specific" than previous threats.

While an exact target was unknown, "the intent seems clear. The intent is to attack Western, not just US, interests," Dempsey said.

The State Department issued a worldwide travel alert to US citizens, warning of the "potential for terrorists to attack public transportation systems and other tourist infrastructure."

Hours after the US alert was issued, an audio recording was posted on militant Islamist forums in which Al-Qaeda chief Ayman al-Zawahiri accused the United States of "plotting" with Egypt's military, secularists and Christians to overthrow Islamist president Mohamed Morsi.

The United States has been especially cautious about security abroad since an attack on its consulate in Libya's second city Benghazi on September 11 last year. Ambassador Chris Stevens and three other Americans were killed in the attack blamed on Islamist militants.