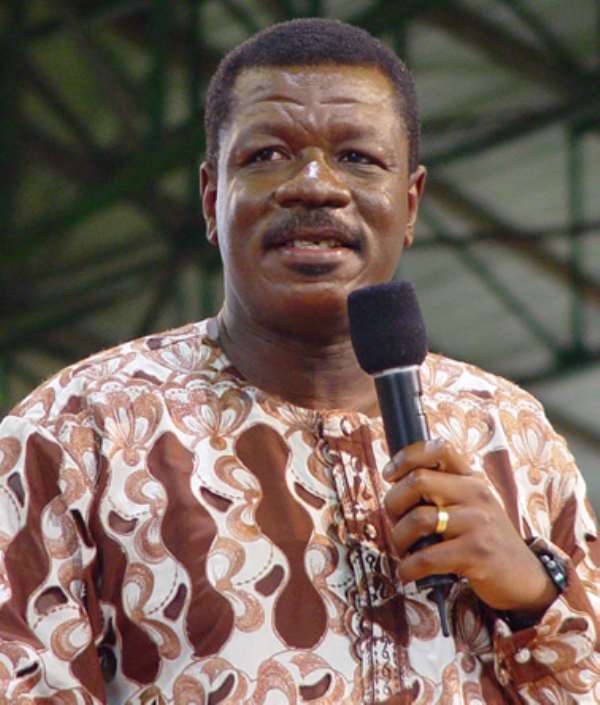 I have followed with keen interest and sometimes utter amusement at current developments in regard to prophecies, predictions, foretelling and forthtelling in the run up to the 2012 elections; and currently as we face the inevitable verdict that the nine-panel of judges presided over by Mr. Atugbuba will bring out to conclude the all-important petition before the Supreme Court.

This is a genuine concern expressed by a man of God. I believe he led his church to pray about this concern, engineered by God, so as to obviate any calamity that may befall the land. This deed should come across as an innocuous attempt by a concerned citizen who by virtue of his office has a lot of following. Indeed this was meant for the consumption of his church and all who have Ghana at heart.

It came as a big surprise to me when I heard people in prominent positions in politics, the media and society raining insults on him and some calling him 'coup monger' whilst others also branding him as a 'prophet of doom'. It is alleged that Mr. Akwesi Pratt Jnr, the Managing Editor of the Insight Newspaper described the mournful cry of the reverend minister as coming from somebody suffering from 'high fever', though he has since come out to deny making disparaging comments about Pastor Otabil. In another instance Dr. Tony Aidoo also came out give it to the reverend minister.

I believe that there are many underlying and blockbuster issues which have been ignored over time and are now rearing their heads in this form. This is major reason informing this piece.

I remember some few months ago the Rev. Owusu Bimpah came out to make some predictions, significant of which, is the death of the President, His Excellency Mr. John Dramani Mahama. I must be quick to state here that I am not the least enthused at the prediction and I am one of those people who pray for the long life of the president. I was however a bit bewildered by the way people especially Christian Leaders jumped to tear him apart and made him into punching bag. They lambasted him and some alleging that he was not called by God. From the least to the greatest of the Apostles of the land denounced and called him names. I felt very embarrassed to hear him coming out to defend himself and in the process declaring that some of the great men who called him names had one time or the other sought from him prophetic counsel and advice; some bordering on the deaths of some of these great men of God. I was ashamed that the issue was not addressed but peripheral matters were given prominence.

I recalled at that time a man of God (name withheld) was called on Adom Fm Radio about these prophetic utterances. He said that they were false prophetic words given by the prophet. Strangely when he was called on the same radio station, this time after Pastor Otabil gave the prophecy, he said that he also had had a vision when in South Africa for a Christian programme. In that vision he saw that Ghana was in tumult and turmoil. I laughed and asked myself should we at this time believe because he is confirming the prophetic words of another.

I believe strongly that some genuine persons who see events about the country will be afraid even to come out to pray about it for fear of being branded as prophets of doom. The prophets Jeremiah and Isaiah were said to be traitors because they prophesied of bad things they saw about their nation. While not encouraging prophecies of all sorts it will be bad on the part of the church to jump at any chance to condemn prophets for prophesying about things revealed to them by God. I say so because even our old people say 'Nobody was there when someone was calling on his God'. The Bible encourages us not to despise prophecies but test them.