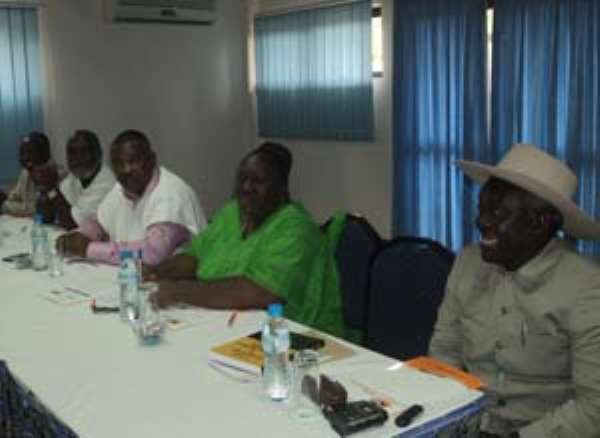 I applaud the decision by the Karikari-led Media Foundation for West Africa (MFWA) to studiously monitor the use of language on radio-talk shows in the lead-up to the long anticipated verdict of the Supreme Court on the 2012 election petition (See "MFWA Resumes Monitoring of Language on Radio" Daily Graphic/Ghanaweb.com 7/29/13). My only wish is that such monitoring of language usage by politicians and political activists could be extended to television talking heads.

Obviously,the primary consideration here appears to have been predicated on the fact that the overwhelming majority of Ghanaians listen to radio than view television programs. I also strongly believe that the MFWA would be far more constructive and credible, if the foundation also solicited the voluntary expertise of lawyers to explain to the listening public precisely what the Supreme Court verdict implies, whichever way it goes; and also why these experts believe that the Atuguba-presided court arrived at the decision that it took. And even more importantly whether, in the glaring face of the evidence, as witnessed via television around the globe, the verdict so rendered was fair or unfair.

In other words, we cannot simply assume that the judges who heard the Akufo-Addo/New Patriotic Party petition are totally devoid of any ideological proclivities that may well have heavily impacted on the process and the manner by which each and every one of them arrived at their decisions. This is what judicial justice is squarely about. In fine, we cannot casually assume that, somehow, any verdict handed down by the Atuguba-presided court ought to be taken at face value to be fair and clinically sound, whereas the rest of us, somehow, need to be policed in order to get us to synch with whatever is deemed to constitute good and acceptable behavior.

I am also worried about the constant emphasis on "peace" and "stability," almost as if these admittedly salient and salutary ingredients of a progressive society can be attained in the glaring absence of "justice," which was actually what brought the major players to the election dispute before the Supreme Court, to begin with. It also goes without saying that the origins of "hate speech" and "pro-violence expressions" inhere in the sort of patent bad faith shockingly exhibited in the proceedings by the insolently cynical Dr. Kwadwo Afari-Gyan, the Electoral Commissioner and the institution that he has headed for the past two decades.

President John Dramani Mahama has been the most guilty on the preceding score, by showing an insignificantly little remorse for the fraudulent process by which he was declared winner of Election 2012. Needless to say, Mr. Mahama has luridly and deliberately complicated matters by insisting against factual reality that it was, in fact, Divine Providence that elected him President, rather than an incorrigibly cynical and criminally minded Dr. Afari-Gyan.

Messrs. Bernard Mornah and Raymond Atuguba's flagrantly mischievous attempt to illegitimize the proceedings of the Atuguba court, by successfully seeking the revocation of salient parts of Constitutional Instrument 75, ought to be equally highlighted by the Karikari Group. Would the MFWA, for example, preface the rhetorical thrust of its monitoring program with the fact that a section of the membership of the Supreme Court has actually enabled Messrs. Mornah and Raymond Atuguba, the presidential executive secretary, to call the legitimacy of the Atuguba court, and indeed the role of the Supreme Court itself as a court of last resort, into serious question even long before the court had delivered its verdict?

In essence, what I am trying to do here is to critically highlight the fact that simply monitoring and shaming political foul-mouths would not guarantee the healthy maintenance of "peace" and "stability" in the country. Prof. Kwame Karikari, come on, Ghanaians are far smarter and sophisticated than that!