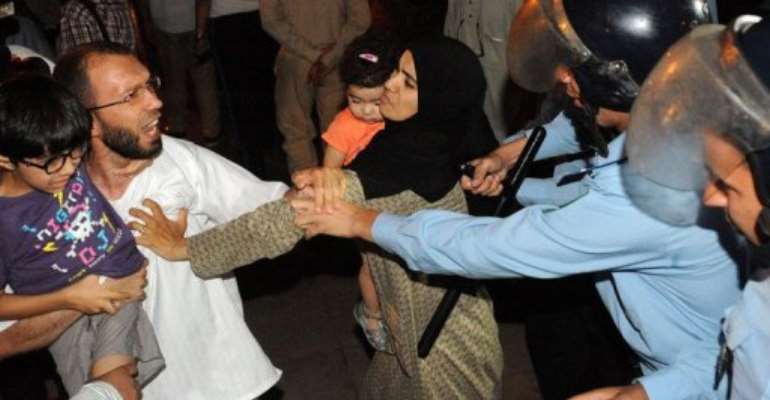 Police disperse a crowd protesting against a royal pardon handed to a Spanish paedophile, in Rabat, on August 2, 2013. By Fadel Senna (AFP)

Dozens of people including photographers and reporters were injured in clashes with authorities, who stepped in to prevent the protest in front of the parliament building in the capital Rabat.

According to media reports, King Mohammed VI pardoned a 60-year-old Spanish man imprisoned in 2011 for raping 11 children aged between four and 15.

Speaking to AFP on Thursday, Justice Minister Mustapha Ramid confirmed the royal pardon, but declined to comment further on the details of the case, saying: "This individual will be extradited and he will be forbidden from entering Morocco."

Protesters slammed the pardon as "an international shame" with one demonstrator saying the state "defends the rape of Moroccan children".

One young woman student told AFP: "This is the first time I have been to a demonstration because I am outraged by this pardon which has set this paedophile free."

Hakim Sikouk, who also took part in the Rabat protest, told AFP: "I was with a group of friends in front of the parliament when the police intervened violently. I was hit on the head."

Similar demonstrations were broken up earlier Friday in the northern cities of Tangiers and Tetouan.

In June, thousands of Moroccans marched in Casablanca to condemn paedophilia and violence against children in the north African country.

On June 20, police arrested a suspected British paedophile after local residents overheard the screams from a six-year-old girl he allegedly abducted.

And in May, a Casablanca court jailed a 60-year-old Frenchman for 12 years after convicting him of paedophilia.

Abdelali Hamiddine, a senior member of the ruling moderate Islamist Party of Justice and Development, said the pardon was a "mistake".

JUST IN: Mahama lawyers file another motion to compel EC to ...
49 minutes ago