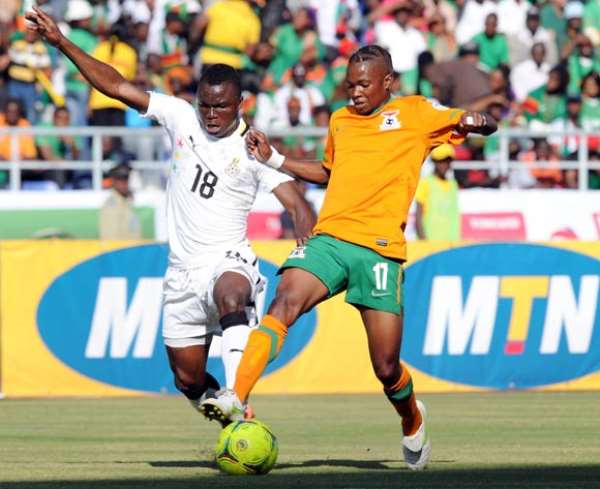 The Black Stars will only have to avoid defeat against the Chipoloplo in Kumasi on September 6 to progress to the final stage of the qualifiers for next year's World Cup in Brazil.

This crucial game has however been brought forward to a Friday instead of the normal Sundays due to an arranged international friendly against Japan four days later.

Many football fans are however unhappy with the decision to shift the match forward only for a 'mere' friendly with a World Cup slot at stake.

Crtics fear this change will not give the Black Stars enough time to prepare for the crucial game as many of the Black Stars players are foreigned-based and would take time to report to camp due to their remoteness.

This is however not the first time the Black Stars have had to play such a crucial game on a Friday.

It will be recalled that Ghana beat Congo Brazaville 3-1 at the same venue – the last game of Kevin-Prince Boateng and Michael Essien for the Black Stars – in a 2012 Nations Cup qualifier on Friday June 3, 2011.

Many fans however remain against the decision to play Zambia who have been a thorn in the flesh of the Black Stars in recent meetings earlier than expected.

The senior member of the Ghana FA's Executive Committee; Randy Abbey agrees and believes it is an irrevessible mistake which ought not to be repeated.

“I think it is a mistake to fix the match on Friday, because the team will lose two days of preparation for the World Cup qualifier against Zambia in favour of the Japan friendly,”Abbey told Kumasi-based Metro fm.

“If my view was sought before the match was fixed on Friday, I would have advised on Sunday instead, but right now there is nothing we can do about it, than to avoid a similar mistake in the future.”

Ghana are a point ahead of Zambia in Group D ahead of the crucial meeting on September 6.

The Black Stars are chasing a third successive World Cup qualification following their maiden and second appearance in Germany and South Africa in 2006 and 2010 respectively.

NPP may lose 2024 elections if Bawumia is imposed as flag be...
49 minutes ago

Keep quiet and concede defeat because you couldn't perform —...
59 minutes ago