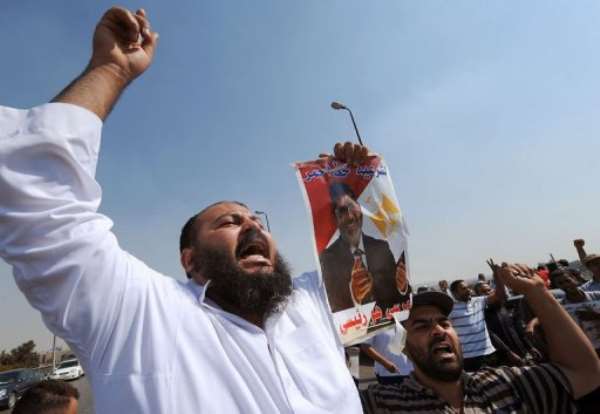 CAIRO (AFP) - Defiant supporters of deposed president Mohamed Morsi rallied in their thousands across Egypt Friday demanding his reinstatement, as the interim premier suggested a crackdown on their protest camps was imminent.

Morsi's Islamist supporters flooded streets in central Cairo and in the second city Alexandria, carrying pictures of the deposed leader and chanting against the military coup that ousted him on July 3.

In the oasis town of Fayyum, south of Cairo, Morsi loyalists clashed with police who fired tear gas to disperse them, security officials told AFP.

Pro-Morsi protesters also took to the streets in the central Egyptian city of Assiut, the official MENA agency reported.

The government has said it held off from breaking up the Islamists' protest camps in Cairo out of respect for the holy month of Ramadan, which ended on Wednesday night, and to give foreign mediators a chance to end the deadlock peacefully.

With the failure of the mediation, the country is bracing for an increasingly inevitable confrontation between the army-installed government and Morsi's loyalists demanding his reinstatement.

"The government wants to give the protesters, especially the reasonable ones among them, a chance to reconcile and heed the voice of reason," said prime minister Hazem el-Beblawi.

But he warned, in a statement late Thursday, "that the situation is approaching the moment we would rather avoid".

The deadlock could lead to a prolonged crisis punctuated by violence, analysts say.

An uptick in attacks, such as the bombing of a police station in a Nile Delta city on July 24, may ensue as more radical Morsi supporters turn to militancy.

"Short of a political agreement, the most likely outcome is a prolonged stalemate, repeated clashes and a transitional process in many ways fundamentally detached from reality," the International Crisis Group watchdog said.

"Nor should one underestimate the risk that some Islamists, convinced that the democratic process will never make room for them, drift towards violence," it added.

Many supporters of the coup that overthrew Morsi, after millions rallied demanding his resignation, have pressed the government to crack down on the Islamists.

"A truce for Eid," read the headline of the state newspaper Al-Gomhuria on Friday, as the countdown began to the dispersal of the Cairo protest camps.

Eid al-Fitr, the holiday that concludes the Muslim fasting month of Ramadan, ends in Egypt at sunset on Saturday.

The main sit-in, in Rabaa al-Adawiya Square, has come to resemble a village of tents, raising concerns of a possible carnage if police move in.

"This remains a very fragile situation, which holds not only the risk of more bloodshed and polarisation in Egypt, but also impedes the economic recovery which is so essential for Egypt's successful transition," US Secretary of State John Kerry and EU foreign policy chief Catherine Ashton said in a joint statement Wednesday.

US Deputy Secretary of State William Burns and EU envoy Bernardino Leon left Cairo this week without making headway in finding a compromise.

The interim presidency said diplomacy had failed and held Morsi's Muslim Brotherhood responsible "for consequent events and developments relating to violations of the law and endangering public safety".

Violence on the sidelines of demonstrations between Morsi's supporters and opponents has killed more than 250 people -- mostly Morsi's backers -- since the end of June.

Western envoys pressured the Brotherhood to end the sit-ins and urged the government to release jailed Islamist leaders as a confidence-building measure.

Morsi is being held on suspicion of having collaborated with Palestinian militants to kill policemen and stage jail breaks during the 2011 uprising against strongman Hosni Mubarak, while he was himself in prison.

Brotherhood supreme guide Mohamed Badie and his deputies are to stand trial later this month on charges of inciting the shootings of protesters outside their headquarters on June 30.

The Islamists say a prisoner release is a precondition for further talks on finding a settlement, which could include symbolically reinstating Morsi, who would then call early elections.

Meanwhile in Sinai, several Egyptian militants were killed in an air strike as they prepared to launch a rocket into Israel, security sources and witnesses said.

The source of the strike was not immediately clear. Some sources spoke of an Israeli air strike conducted from Israeli air space and others credited the Egyptian military.