The Global Corruption Barometer And The Evil Corrupt Empire Of People That Creates, Loots And Share (3) 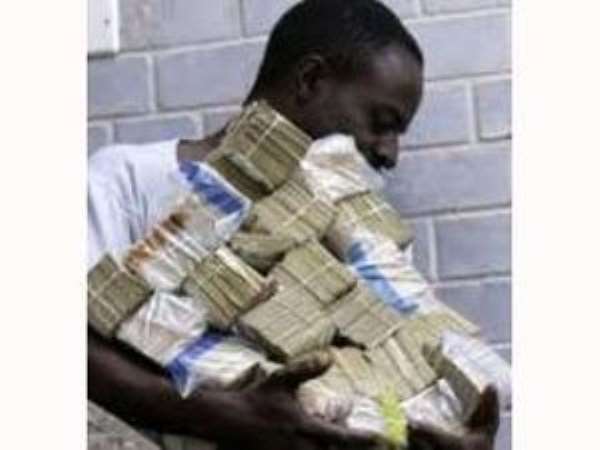 Even though the Judiciary is independent and largely impartial, there are still instances of perceived corruption that need to be dealt with seriously by the institution. The Chief Justice should, therefore, take measures to root out all corrupt officials within the Judicial Service, speed up law reforms, speed up the judiciary process with the view of reducing bureaucracy and ensuring that the official and unofficial cost of seeking justice is minimized as much as possible;

The various arms of government should work together to put in place adequate checks and balances to ensure that powerful and well-connected personalities and institutions within the private and public sectors do not hijack the political system and government policy and decision-making and action to their advantage and to the disadvantage of the citizens.

Various institutions of government charged with dealing with corruption should be adequately resourced and given the necessary independence to fight corruption and bring corrupt persons to book. In line with this recommendation, the laws establishing them may have to be reviewed to make the organizations more relevant and effective.

Elected public officers should not enjoy immunity when charged with corrupt offences and the Judiciary and Parliament must urgently resolve the issue of how and when an MP can be arrested when he/she is alleged to have committed a crime. The time is long overdue for corrupt persons to be named, shamed and jailed and their illegally acquired properties confiscated to the state.

The Whistleblower Act should be amended to provide adequate protection for citizens to report wrongdoing in the public and private sector and protect them from retribution. There should be appropriate follow-up mechanisms to encourage people to use existing reporting mechanisms to speak out against corruption when they witness or experience it and get redress.

Ghanaians must begin to exercise their rights more responsibly by voicing out against corrupt officials, insisting on their rights and voting for candidates considered clean. Civil Society Organizations (CSOs) have a role to play in ensuring this and the National Commission for Civil Education (NCCE) should be resourced to enable it perform its constitutional mandate more effectively.

The Government and Parliament should work together to bring the Political Parties Act in line with the 1992 Constitution to ensure that political party financing is transparent and require political parties, candidates and donors to publicly disclose donations.

Government should enable independent civil society organizations to function as effective watchdogs of government and to help people to hold public officials to account;

The Assets Declaration Law should be enforced to the letter while reforms are implemented to make it more relevant;

The Executive and Parliament should adopt a comprehensive Code of Conduct for its members, including guidance on conflict of interest situations and rules of disclosure of assets, interests and income, using inputs from the Ghanaian public, particularly the CHRAJ.

As a public opinion survey, the GCB reflects the views of the country's population aged 16 and over. Fieldwork was conducted between October 2008 and March 2009. In each country, the polling method was based on local conditions. Methods included face-to-face, telephone and online interviews. The Barometer is a rich source of empirical data regarding public views of and experiences with corruption. Policy makers can use the Barometer to better understand the extent to which public institutions and services are seen as corrupt, expand their knowledge of the form and frequency of petty bribery.

The GCB contains information that is highly useful for policy reform and for designing further research. Civil society, researchers, anti-corruption stakeholders and journalists can use the Barometer data to assess corruption, raise awareness about the extent of bribery in some countries and promote targeted change in a particular country or institution.

Researchers can use the Barometer to explore determinants and consequences of corruption and bribery in a wide range of countries. It is unique in the research community in terms of its focus and breath of country coverage.

Sometime back the BBC made this report about Ghana, which is similar to the observation of Lee Kuan Yew in his book: 'Ghana was the first place in sub-Saharan Africa where Europeans arrived to trade – first in gold later in slaves. It was also the first black African nation in the region to achieve independence from a colonial power, in this instance Britain. Despite being rich in mineral resources and endowed with good education system and efficient civil service, Ghana fell victim to corruption and mismanagement soon after independence in 1957. There are plenty of signs of money in Accra. New hotels are going up while half-built houses dominate the outer suburbs of the capital, often funded by money sent home from relatives overseas. But for many on the lower rungs of society in a poor country, opportunities are limited, work is insecure and rising fuel prices have hit hard.'

Should the BBC come out with a new revised report on Ghana today, it would be far more depressing and devastating.

This country has witnessed and experienced corruption in its various forms, but never in the annals of this country have we seen anything akin to the past and present NDC political administrations made up of greedy bastards, old evil dwarfs, babies with sharp teeth, leeches, parasites, thieves, liars, team B players, whose philosophy is 'yebediibikeke' to wit 'just to chop.'

These shamelessly political prostitutes, without any conscience, carry out their trade of industrial corruption with the adroitness of certified white collar armed robbers with nothing to care about and oblivious of the consequences.

Never in this country have we experienced so much greedy and gluttony by some despicable imbeciles who have betrayed the trust of the people and captured all critical institutions.

Now the poor citizen has nowhere to hide his head. Everything visible to the naked eyes and smelling noses of members of the Mahama NDC administration should be the subject of taxation. The taxes have been imposed on 'chalie wate', condoms and cutlasses at a time when agriculture is rain-fed and cutlass-hoe based. Wonders will never cease in the eyes of the political midgets with gargantuan appetite for corruption.

Everybody should get it straight. The Atta-Mills and John Mahama NDC administrations have never created wealth. What the two administrations have done is to create the corruption machinery to siphon the people's wealth which has been created by the good people of this country through their taxes and sweat.

What the NDC administrations have done is to use all the ingenious methods to loot the wealth and then devise the ways and means to share the illegally acquired wealth among themselves.

And that leads us to the presidential election petition. Some people are calling for a run-off. It is not an option at all. Such persons should therefore have their brains examined under the Hobble microscope for possible effects of mental seizure.  The entire Electoral Commission (EC) has been discredited. The whole EC is like a person with leukemia. The whole blood must be drained for a fresh one to replace the diseased one. After the entire Commissioners and their staff have been sacked which should be a natural course of events, who is going to appoint new ones? Certainly not the discredited John Mahama NDC administration. Who is going to provide the money for new electoral register and meet the entire cost of the run-off? The current register is tainted with fraud. How are the political parties outside the NDC going to find money to campaign? I pause for an answer.