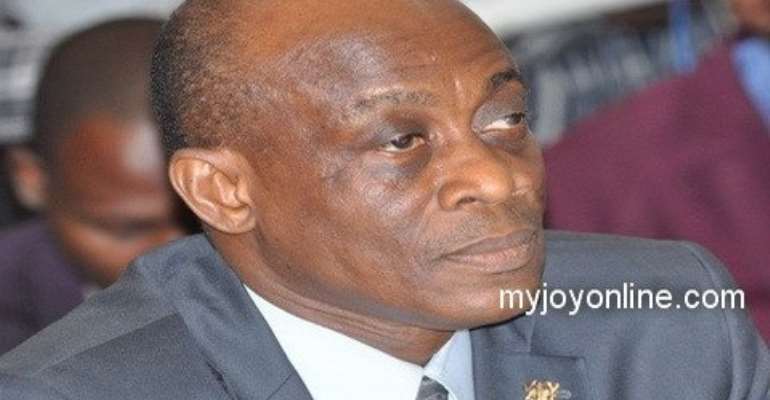 The Finance Minister, Seth Terkper on Friday, August 01 made his very first appearance on the international business channel, CNBC Africa which is now partnering Multi-media Group in business content generation and delivery.

This was on the programme “Closing Bell” which also airs on the JOY NEWS Channel on Multi TV every weekday at between 3:30 and 4:00pm.

Mr. Terper touched on a number of recent developments in Ghana's economy. He cited the power crisis as a major impediment to economic growth in the past months but emphasized that the economy is now well-positioned to bounce back strongly from such shocks it has suffered in recent times.

“We had some setbacks in the economy particularly gas supply from Nigeria which led to serious power shortages which also affected productivity. But as we speak, the gas supply has been restored and we are also on stream to produce our own gas and so the Ghanaian economy would return to the robust growth it has seen in the last few years” he said.

On the recent $1 billion Eurobond issue, he summarized the four major objectives which the proceeds are to be committed to.

“We're first going use about $250 million to refinance the 2007 Eurobond which is due to mature in 2017. We're also going to use about $200 million to do extend the tenure of certain bonds issued on both the domestic and external markets. We're also going to use a part of the funds to support the capital aspect of our budget. The remainder would finally be use for counterpart-funding which is government's contribution for loans taken to facilitate disbursements of those foreign loans” he outlined.

Also commenting on the recent forecast of 7 percent growth for the country in 2013 compared with the 14.4 percent in 2011, he emphasized this shouldn't necessarily be perceived as a a mediocre performance.

“We're hoping to achieve an 8 percent performance but even a 7 percent is on a wider base. Remember our GDP has almost doubled in the last 5 years” he stated.

He later allayed fears over the effect of the falling gold and cocoa prices on the local economy. He said revenues from oil production, the recent taxes and government's vision to diversify the economy should adequately cushion the economy against the resultant shocks.

“We expect that revenues from the country's oil production which has fueled economic growth in the last few years would stabilize the current accounts. But the real benefits of the oil and gas resources is the expansion we would want to do in the sector - especially for the gas processing plant we're establishing, that is, the development of the petrochemical industry and the linkages with the agric sector mainly through fertilizer production" explained.

"This is important because Ghana has always been keen on maintaining a diversified economy. We're also expecting some benefits from tax revenues to support our consolidation efforts" he added.

Mr. Terkper also explained the causes of the ongoing strike by the country's University Teachers – hinting that government plans to soon hold a special forum for stakeholders to discuss the way forward in the implementation of the Single Spine Pay Policy.

“We have given them what they want. The strike is as a result of government's arrears to them. Over the last 3 to 4 years we have been implementing salary reforms because of low productivity in the public sector. Unfortunately the estimates for some of those payments have gone beyond the budget and that partly explains such labour agitations being witnessed” he explained.

Speaking to JOY BUSINESS after the session,the Finance Minister praised Multimedia for the partnership with CNBC Africa - describing it as welcome news for Government and the people of Ghana in general.

“CNBC is known to be a global leader in the business and financial world especially in news and programming terms. We are therefore hopeful that it would project not only government business but a lot of potential that the private sector has also brought to bear on the growth of the local economy. It will give very good exposition not just for Ghana's economy but also the Ghanaian population regarding what happens in the global business world” he noted.

Aside the “Closing Bell” programme, “Power Lunch” also airs every weekday between 11:00 and 11:30 on the JOY NEWS Channel on Multi TV.

The two programmes on the international network are the latest additions to the bouquet of business programming the JOY NEWS Channel promises to bring its audience.