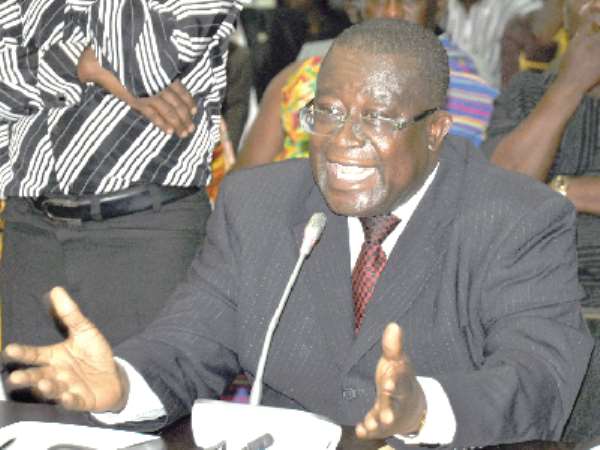 A national stakeholders forum to review the implementation of the Single Spine Pay Policy (SSPP) has been slated for August 6 and 7, 2013.

The forum is in line with President John Dramani Mahama's pledge during the celebration of this year's May Day for a consultative forum to deal with the burgeoning wage bill and its mismatch to productivity by public sector workers.

To be held on the theme: 'Building national consensus for the sustenance of the SSPP', the forum is expected to provide the road map to ensure a sustainable wage policy for the country.

Currently, the wage bill takes up about 65 per cent of total government revenue.

A deputy minister of Employment and Labour Relations, Mr Antwi-Boasiako Sekyere, who is co-ordinating the meeting, told the Daily Graphic that Finance and Economic Planning minister, Mr Seth Terkpeh, would make a key presentation to the stakeholders to enhance the discussions.

'He holds the purse, and, therefore, his presence and presentation at the meeting would be paramount,' Mr Sekyere said.

According to him, representatives of government agencies, the National Labour Commission (NLC), the Fair Wages and Salaries Commission (FWSC), labour unions and employers would also make presentations at the two-day event.

The Trades Union Congress (TUC) early this week raised the red flags over the government's delay in negotiating with organised labour.

In a statement, the TUC expressed doubt over the government's argument on the high public sector wage bill.

Meanwhile, there appears to be a lull in labour agitation in the country as social partners, government, employers and labour unions have resorted to the courts for the resolution of their grievances.

Social partners have all expressed relief over the calm in the industrial front, saying that with the courts taking over the adjudication of the concerns and grievances, all parties were adhering to the rule of law.

In separate interviews, some representatives of labour unions and government agencies said they were all prepared to test the law on their employment relations in the court and seek lasting redress.

The Vice President of the Ghana Medical Association (GMA), Dr Sodzi Sodzi-Tettey, in an interview, expressed the hope that resorting to the courts would provide a lasting solution to the concerns of doctors regarding the implementation of the SSPP.

The GMA has been one of the unions that has had long standing issues on their grading, market premium and convergent difference, since their migration onto the Single Spine Salary Structure (SSSS) in November, 2011.

Their concerns have resulted in several mediation efforts, compulsory arbitration awards and overtures to the government agencies concerned, most of which have been fruitless.

The Chief Executive of the FWSC, the agency charged with administering public sector salaries, Mr George Smith-Graham, was also of the view that the labour laws needed to be tested in the law courts.

He said that would instil the rule of law in labour relations and ensure industrial peace and harmony.

Since the beginning of the year, Ghana has grappled with several strikes by workers.

The key ones were those called by the GMA, the Government Hospital and Pharmacists Association (GHOPSA) and the University Teachers Association of Ghana (UTAG).

The GMA called the strike when several unsuccessful overtures to the government, from the presidency to its agencies, to discuss and seek resolution to their concerns failed. They had to resort to the action, calling their members to lay down their tools on Monday, February 11, 2013.

In April, UTAG, the GMA and the GHOPSA, all went on strike for periods between a week and one month, respectively.