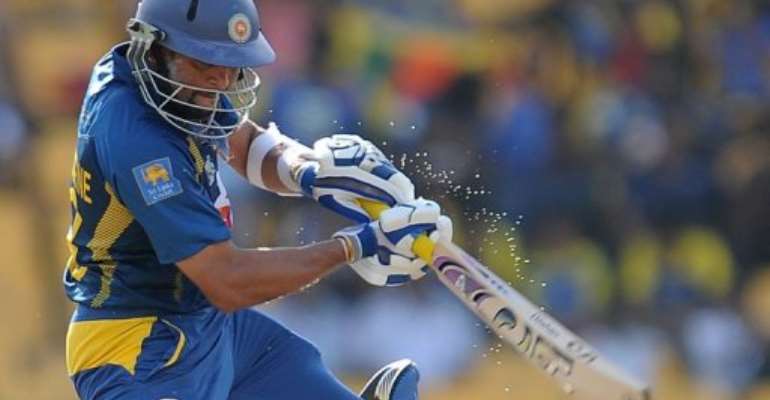 Tillakaratne Dilshan plays a shot against South Africa in Colombo on July 31, 2013. By Lakruwan Wanniarachchi (AFP)

COLOMBO (AFP) - Tillakaratne Dilshan missed his second successive century by one run as Sri Lanka piled up 307-4 in the fifth and final one-day international against South Africa in Colombo on Wednesday.

The aggressive opener, who hit an unbeaten 115 in the fourth game in Pallekele on Sunday, plundered 13 boundaries before he was bowled for 99 by Ryan McLaren in the 39th over.

Lahiru Thirimanne, promoted to number three, scored 68 and Kumar Sangakkara was unbeaten on 75 off 45 balls after Sri Lanka won the toss and chose to bat at the Premadasa stadium.

Left-handed Thirimanne and Dilshan put on 163 for the second wicket after Kusal Perera was caught behind off Morne Morkel in the fifth over.

Perera was one of the four changes made by the hosts, who have already taken an unassailable 3-1 lead in the series.

The tourists, looking for a consolation win, recalled McLaren and spinner Aaron Phangiso in place of Rory Kleinveldt and Robin Peterson.