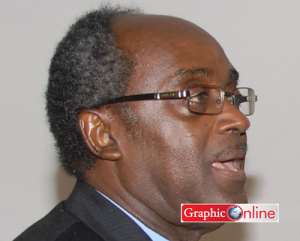 He will be fondly remembered by the bench, the bar, the media and litigants for his eloquence, poise and erudite lead judgements.

Prof. Justice Samuel Kofi Date-Bah, for the last time on the Supreme Court bench, delivered a judgement on the fair distribution of property after the dissolution of marriage.

In a unanimous decision on  Friday, July 26, 2013, the court affirmed its earlier decisions that there must be equal distribution of property between a husband and his wife after a divorce.

It was an emotional moment on the premises of the Supreme Court before he delivered the judgement when other members of the bench converged to bid a formal farewell to their long-time colleague, Prof. Justice Date-Bah.

Appointed as a Supreme Court judge in September 2003, Prof Justice Date-Bah is billed to formally retire from the bench on August 26, 2013.

Messages
Expressing appreciation for the support lent him by his colleagues, Prof. Justice Date-Bah said it was "a rare and fruitful privilege to have served on the Supreme Court of Ghana".

For his part, Mr Justice William Atuguba described Prof. Justice Date-Bah as an 'illustrious brother' and wished him well in his future endeavours.

"We are happy because it's our obligation to do honour to our illustrious brother whom I have appropriately nicknamed Lord Halsbury of Ghana.

'Our brother coming to the bench with the usual first -distinction, he has always been a man with first-class achievement,' Mr Justice Atuguba said fondly.

Wishing the retired Supreme Court judge well, a member of the bar, Mrs Margaret Yaa Ntiriwaah Acheampong, stated, 'I know you very well and I know the calibre of person you are. You have always been a first-class achiever. We pray that what you have done will go down in history for generations upon generations. Even though you are leaving the Judiciary today, we know you are still going to contribute until the day the Almighty will call you to rest."

Recent Judgements
Three classical judgements recently delivered by the Supreme Court were all presided over by Prof. Justice Date-Bah.

On June 14, 2013, the court directed the international construction firm, Waterville Holdings Limited (BVI), to refund all moneys paid to it by the Ghana government on the premise that it had no valid and constitutional contractual agreement with the government.

Waterville is expected to refund 25 million euros it received from the government following the court's unanimous judgement that the contract it entered into with the government for stadia construction for CAN 2008 was unconstitutional because it had contravened Article 181 (5) of the 1992 Constitution which requires such contracts to go to Parliament for approval.

In giving the order, the court held that the High Court exceeded its jurisdiction when, in October, 2012, it grounded the ARA Libertad, an Argentine warship, from leaving the shores of Ghana.

In a unanimous decision, the court held that it was wrong for the lower court to have detained the vessel in the first place and accordingly restrained the lower courts from making such decisions in future.

It held that such acts were dangerous because they had the tendency of endangering the territorial sovereignty of Ghana and accordingly quashed an October 2 and 11, 2012 order of the High Court which detained the vessel.

Isofoton Order
In another judgement supervised by the renowned judge, the court, on June 21, 2013 ordered the Spanish energy company, Isofoton S.A., to refund the cedi equivalent of $325,472 it received from the government in March 2011.

The court also directed the company to refund all moneys it had so far received from the government on the grounds that the agreements resulting in the payment were unconstitutional and, therefore, null and void.

The suits against Waterville and Isofoton were both filed by a former Attorney-General, Mr Martin Amidu, who had argued that both payments were illegal, null and void, of no legal effect and in breach of Article 181 of the 1992 Constitution which requires such contracts to receive parliamentary assent.

He was a Gem
Most lawyers the Daily Graphic spoke to were full of accolades for Prof Justice Date-Bah, whom they described as a 'gem', 'intelligent', 'eloquent', 'thorough',  'Ghana's Lord Denning,' among a host of impressive names.

He subsequently qualified as a Barrister at Law Ghana in 1966; obtained an LL.M  from the Yale Law School in 1967 and a Ph.D from the London School of Economics, London University, in 1969.

• 2003 - to date: Justice of the Supreme Court of Ghana, responsible for many leading judgments;

Previous Record
• 1984 - 2003: Special Adviser (Legal) at the Commonwealth Secretariat, London, responsible for effective legal advisory and negotiating services to developing member states of the Commonwealth. He played an instrumental role as leader of a multidisciplinary Commonwealth Secretariat team which assisted the first independent Government of Namibia to negotiate a joint-venture agreement with De Beers that has been the bedrock of the Namibian economy since then and several petroleum exploration agreements with international petroleum companies on behalf of the government.

1969 to 1981, Lecturer, Senior Lecturer and then Associate Professor, Faculty of Law, University of Ghana;

1980-84, Professor and Head of Department of Private Law, University of Calabar, Nigeria;

• In the 1970s, Member of the Ghana Law Reform Commission.

• In the 1970s, Representative of the Ghana Government to the United Nations Commission on International Trade Law. He was elected Chairman of the commission in 1978.

• 1996 to date: A member of the International Institute for the Unification of Private Law (UNIDROIT), Rome, Working Group that produced the UNIDROIT Principles of International Commercial Contracts.

Membership of learned societies:
• Since 2000, Fellow of the Ghana Academy of Arts and Sciences; and

• Since 1996, Member of the International Academy of Commercial and Consumer Law.

Kennedy Agyapong will win NPP’s primaries because of his hon...
8 hours ago

You disgraced yourselves and the entire country by booing Ak...
8 hours ago