Mills was a man to be trusted - Kwamena Ahwoi 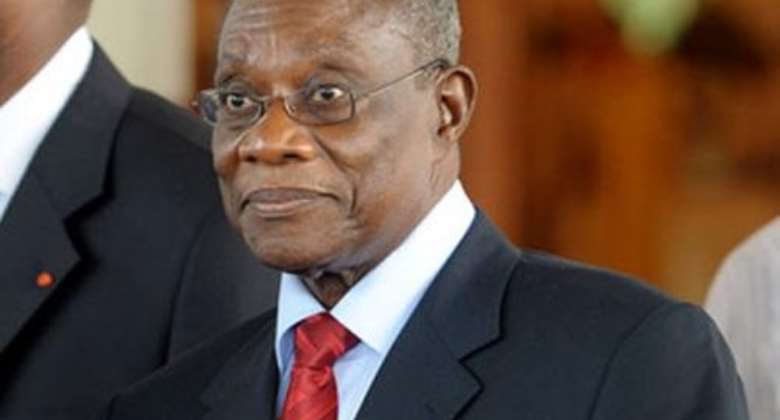 A former Minister of Local Government, Prof. Kwamena Ahwoi, has described the late President John Evans Atta Mills, as a man who promoted peace, upheld the truth, abhorred corruption and worked assiduously to promote the interest of the disadvantaged.

He, therefore, urged Ghanaians of all shades and opinions to use his death to unite.

'The evidence that President Mills was a President you could trust was simply too abundant to be missed,' he said, adding that he (Mills) saw his foray into politics as a divine call hence his pro-peace policies, programmes and utterances.'

Prof. Ahwoi was speaking at the first anniversary commemorative lecture in honour of the late President in Accra on Monday.

It was on the theme: 'Atta Mills, the man.'
The lecture was attended by people from all walks of life including ministers of state, members of Parliament and members of the diplomatic corps.

The Dansoman Youth Choir was in attendance.
Poetry eulogising the late president was performed by Prof. Kofi Anyidoho, a lecturer at the University of Ghana.

Prof. Ahwoi said although the late President Mills was a family man, with a wife and child, his bigger family was humanity and that was why he prefaced all his speeches with 'My brothers and sisters.'

According to him, Prof. Mills cared so much about every human being that it became part of his private philosophy in politics to leave the world a better place than he met it so that humanity would live in peace, unity and godliness.

'Call it his private perspective on globalisation, and you would not be far from wrong. But perhaps it was in this area that Prof. Mills manifested his weakness, nay his frailty as a human being. He believed so much in the innate goodness of all human beings. When people were plotting against him, he preferred to leave it to God because as he puts it, 'God is in control.' Perhaps it was his humanism that led people to criticise him that as a politician 'he did not have fire in his belly.'

'I can imagine Prof. retorting to such critics as follows: 'Fire burns; I don't want to burn anybody',' he said.

The religious man
Prof. Ahwoi, who was a student of President Mills at the University of Ghana in the mid 1970s, described the late President as one who put God first in everything he did and had 'God is in control' and 'God installs kings' as his mantra.

He said it was obvious that Prof. Mills's critics on that score had not understood him, and added that given the ordinariness of his upbringing, the circumstances of his involvement in politics, his ability to serve successfully as Vice President and the fact that he became President after contesting elections three times had convinced him that there was a mystical force driving his destiny, and who else could that mystical force be but God.

The sportsman
Prof. Ahwoi said President Mills was a consummate sportsman who identified with almost every sport.

He said hockey was the passion of President Mills and the modern international standard astro-turf hockey pitch which he was instrumental in building, stood as a tribute to his memory.

In the area of football administration, he said, Prof. Mills excelled, as he was President of the Amalgamated Clubs in the University of Ghana and Chairman of the Board of Directors of the National Sports Council, Chairman of the Black Stars Management Committee and Vice President of the Ghana Olympic Committee at the national level. He also became a board member of the Accra Hearts of Oak Football Club.

The lawyer
Prof. Ahwoi said although President Mills did not practise for long as a lawyer, after being called to the bar on October 9, 1969, he faithfully discharged his obligations to the bar and made himself available whenever the Bar required his services.

On balance, he said, the late President Mills's relationship with the Ghana Bar Association even as a politician was cordial, albeit informal.

The intellectual
He said the late President Mills, a Fulbright Scholar, who earned his PhD at the age of 27, spent more of his time in the academia than in legal practice, saying his interest lay more in an analysis of legal concepts, a critique of judicial decisions and law reforms. In those areas, he said, President Mills performed to perfection, especially, in his favourite areas of special expertise namely company law and taxation.

The tax administrator
As a tax administrator, Prof. Ahwoi said, President Mills improved efficiency in direct tax collection and ensured a widening of the tax net to include a significant proportion of the informal sector such that revenue collection increased ten fold from the period 1988-1996.

In the area of direct taxes, he said, President Mills worked to achieve rapid growth from 1993 to 1996, with a growth in revenue of 700 per cent.

With regard to the Value Added Tax (VAT), he said, the late President played a major role in its introduction.

In and out of office, he said, his concern was how to design and develop programmes to lift them out of their state of underdevelopment and deprivation.

Peace, according to him, was the other virtue that Prof. Mills brought into Ghana's politics.

'He made it clear on assuming the presidency in 2009, that hounding or harassing the members of the previous government was not on his list of priorities.

President Mills also refused to heed to what appeared to be popular calls from within his party, the NDC, to put on trial for whatever reason, appointees and other office holders from the previous administration, a position some thought he would have been justified in taking because of the humiliation, embarrassment and trials the previous administration had put his colleagues through, including his wife, Mrs Ernestina Naadu Mills, when it won political power in 2001,' he said.

Understandably, he said, those were some of the reasons for his falling out with some leading members of the NDC, 'but it is also important to state that in whatever he did, President Mills had a sense of 'the state' which went beyond party ideological idiosyncracies.'

Dr Cadman Mills, a younger brother of the late President, said he would pursue objectives that Prof Mills would approve of if he were alive, including supporting the physically challenged.

The Chairperson of the occasion, Professor Miranda Greenstreet, described the late Prof. Mills as a humble man who had a lot of integrity and believed in serving mankind.